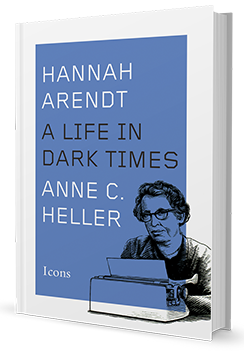 Anne C. Heller's biography of political theorist Hannah Arendt begins, like a traditional epic poem and unlike a conventional biography, in medias res. It reports on the roughly two-year period during which Arendt, then in her 50s, covered a trial of signal importance and published an extensive report. Here's Heller's deft opening sentence: "Afterward, when Hannah Arendt published her book-length account of the trial of Adolf Eichmann, the fugitive Nazi SS officer who had helped to implement Adolf Hitler's Final Solution, the tumult the book created deeply shocked her." Notice how the single word "afterward" implies a particular standpoint in time, to which the text will soon return, by jumping forward from it. (The same method was employed by Gabriel García Márquez in his One Hundred Years of Solitude, which opens with the words "Many years later...") Broadly, Heller's entire text works the same way, discussing the Eichmann book and then going back to the proper beginning of Arendt's life, in 1906.

Heller's first chapter, which comprises 38 pages of the 136-page advance proof I read, proceeds to recount the trial itself, aspects of Arendt's coverage and commentary--in which she insisted on the absolute ordinariness of the man in the glass booth, found him more a clown than a monster, and addressed the acquiescence, as she saw it, of many of Europe's Jews--and the storm of opprobrium that resulted. This method of plunging into the middle of things has the same dramatic effect it has in an epic, or, for that matter, in a good piece of journalism (a field that Heller has worked in): it grabs you. What's more, the opening chapter establishes many of the themes that arise in the rest of the book, among them:

To reduce Arendt herself, or this book, to a few bullet points is almost laughably inadequate in many respects, as will be apparent to anyone already acquainted with Arendt's life and work. Heidegger, for instance, was not merely a philosopher but a tremendously influential one, nor does it quite suffice to describe him as anti-Semitic, for the simple reason that he fell in love with Arendt, who was (this must be said explicitly, lest anyone fail to grasp it) Jewish. Arendt's book on totalitarianism was itself provocative and influential. Heller doesn't attempt a thorough discussion of any of Arendt's writing--the place for that is elsewhere--but what she does say is telling. And, as one would hope even in a brief survey of a life, Heller provides many glimpses, which often add up to portraits, of important figures in Arendt's life, such as Heinrich Blücher, her second and final husband--who, incidentally, originated the phrase "the banality of evil"--and Karl Jaspers, a philosopher who taught Arendt and became a lifelong friend.

For anyone with multiple interests, time is precious (which is why I'm not attempting a full review of this book), and brevity is valuable. Those who want to immerse themselves in Arendt's life and work already have many avenues to pursue; her affair with Heidegger, for instance, is the subject of an entire book, which is one of Heller's many sources. Those who want first of all an introduction now have an admirable one: this biography is both vivid and concise, sensitive and elegant.