GETTYSBURG, Pa. -- The sharp report of thousands of muskets and the booming thunder of dozens of cannon echoed off the green, rolling farmland of southern Pennsylvania, just as it did during the first three days of July 150 years ago.

Lines of men in gray and butternut uniforms let loose the full-throated, banshee wail of the rebel yell and traded volleys at murderously close range with their blue-clad adversaries, the units marching into place as fife-and-drum groups played "Dixie" and "When Johnny Comes Marching Home."

Still, in the first of two competing re-enactments over the next week that will commemorate the 150th anniversary of the colossal 1863 clash between about 165,000 Union and Confederate troops, casualties were in short supply Friday evening and Saturday afternoon as the troops portrayed engagements at Culp's and Cemetery hills and the bloody carnage of the Peach Orchard and the Wheatfield.

Though the three-day battle left a toll of 51,000 Confederate and federal soldiers dead, wounded or missing, few re-enactors, some traveling thousands of miles to participate, were eager to take a Minie ball for the team and spend the rest of the fighting lying in the grass, said Doug Jones, a retired Silicone Valley headhunter from Iowa who was serving as a rebel colonel.

"Sometimes I'll volunteer to be the first," said Jones, who led a reporter back to the Confederate camps on the Bushey farm a few miles outside of town, where the Blue Gray Alliance, a coalition of re-enacting groups, is staging its Gettysburg events.

Not this weekend, however, not for what Derrick Bolt, a 45-year-old from Orange, Texas, who was stopping in Richmond last week en route to Gettysburg, called the "Super Bowl of re-enacting."

Gettysburg's competing re-enactment events -- the other, by the Gettysburg Anniversary Committee, starts July 4 -- are expected to draw as many as 20,000 re-enactors, said Carl Whitehill, a spokesman for the Gettysburg Convention and Visitors Bureau. Those numbers include thousands of infantrymen toting period weaponry, hundreds of artillerymen lugging cannon and caissons and hundreds of cavalry with horses saddled in period tack.

"The re-enactments are always a major draw. People like seeing the history come to life," Whitehill said.

Dave Born, historic programs coordinator for Prince William County and a 1984 graduate of Highland Springs High School who lives in Rappahannock County, was portraying Charles Marshall, a member of Robert E. Lee's staff, as he posed for pictures and talked with spectators Saturday afternoon.

"I've been doing this now since 1984," Born said. "I enjoy the camaraderie with others who enjoy history and I also enjoy the research in portraying particular people. This is like a busman's holiday for me on horseback."

A shared fascination for history was a common theme for the men and women willing to brave summer heat, wool uniforms and canvas tents to participate in the 150th anniversary.

As deafening cannon and musket fire raged in the woods around her, Diane Watson, an American literature professor from Crockett, Texas, was heating water over an open fire for her portrayal of a laundress.

"It really gives an insight into the literature that I teach," she said, including an "enormous appreciation of the hardship of 19th century life."

A few daysearlier, Bolt and William Talton, 60, had stopped in Richmond to visit the Museum of the Confederacy on their way to Gettysburg as part of the Trans-Mississippi Volunteer Infantry, which includes re-enactors from Arkansas, Mississippi, Texas and Oklahoma.

Talton, who lives in northern Louisiana, brought his 12-year-old grandson along for the trip, telling him it was the biggest event he would be likely to see for decades.

Talton also has personal ties to the war, including an ancestor who died fighting with the Confederate army at Antietam.

"I've always enjoyed history," he said. "I consider the Civil War the greatest event in shaping the United States."

For many re-enactors, however, the battlefield portrayals are secondary to the fellowship and atmosphere of the camps.

"The battles are great, but that's not what I come for," Bolt said. "I come for the campfire."

As night fell Friday after the first day's events on the Bushey farm, thousands of white canvas tents were lit by the soft glow of lanterns and campfires. Laughter, conversation and a bit of raucous revelry drifted from the encampments sprawling across the farm.

"You're camping out with people you know," Jones said, trudging up a steep, muddy hill. "You're away from the real world."

For others, the battles are less of a draw than details of 19th century living.

"For me, it was sort of a way to supplement the reading ... making the reading of history books a little bit more three-dimensional," said Don Barnett, 50, a Richmond accountant who frequently participates in marches, bivouacs and other re-creations of the life of a Civil War soldier. The hobbyists Barnett prefers to hang with are more interested in what he calls "material culture," including uniforms, tools and technology produced during the war.

"It's a strange hobby. It's definitely a difference in individual experience in terms of what everybody's trying to get out of it," said Barnett, who opted to stay away from the Gettysburg 150th events and steers clear of battle re-enactments generally. "I don't want to go to anything where I have a bunch of weird people I don't know pointing guns at me."

The fact that there will be competing re-enactments for the 150th Gettysburg anniversary, he added, points to the fractured nature of the hobby, with different groups setting different standards for the historical accuracy of the terrain, gear and other aspects.

"The thing is, when you're talking about a big re-enactment with thousands of people, it's really hard to get everybody on the same page," he said. "Everybody's on a bunch of different pages."

Still, Chris Clarke, 32, a project manager at a financial institution who grew up in Short Pump but now lives in Arlington, said the 150th Gettysburg anniversary and similar events have renewed his interest in the hobby, which he acknowledged has ebbed and flowed over the years.

"It's going to be an event to remember," Clarke said. "It's a huge milestone."

Clarke and Robert Lee Hodge, 46, an Arlington resident who appeared on the cover of Tony Horwitz's 1998 book "Confederates in the Attic," forded the Potomac River Thursday morning at Shepherdstown, W.Va., where much of the Confederate army crossed on its way to Gettysburg.

The crossing was "biblical," said Hodge, who had a Confederate ancestor wounded on the first day Gettysburg.

"You're not playing army," Hodge said. "But you have to deal with this physical challenge that is somewhat dangerous."

Horwitz, who spent considerable time with re-enactors for his book on the lingering cultural impact of the Civil War, said in an interview last week that the hobby attracts different people for different reasons.

"It's hard to really generalize," Horwitz said. "There's a sort-of family camping-trip element to it. ... There's a populist strain to it, a notion that 'I'm going to do my own history.'"

Horwitz said what he most enjoyed while researching the book was the break from modernity.

"Some of the appeal is also as an escape from our world of gadgets and being plugged in every minute," he said. 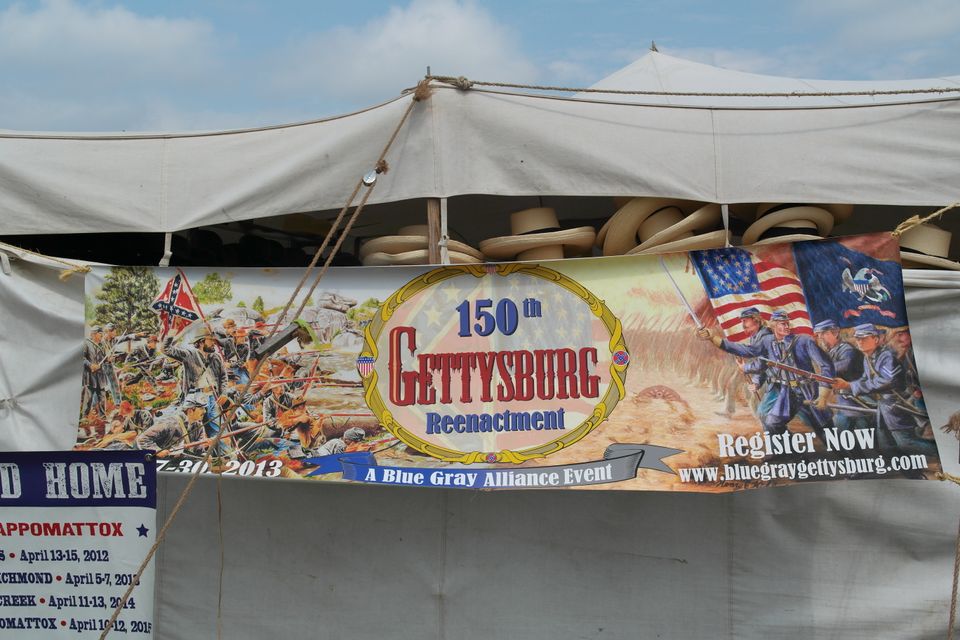