ACCRA, June 4 (Reuters) - An explosion at a petrol station in Ghana's capital Accra killed about 90 people, many of whom had sought shelter there from torrential rain, on Wednesday night, the fire brigade said.

The blast was caused by a fire that erupted at a nearby lorry terminal then spread to the petrol station and other buildings, fire brigade spokesman Prince Billy Anaglate said.

It ripped through the filling station, operated by GOIL , shattering windows and walls and reducing the station to rubble.

"It was an explosive fire and so the people sheltering at the filling station did not have an opportunity to escape," Anaglate said.

Charred corpses and wreckage of about a dozen cars and mini buses littered the forecourt of the station, where security forces kept an anxious crowd behind a police cordon.

A Reuters reporter at the scene saw some charred bodies in cars where they had sought refuge.

Team of rescuers wearing face masks and gloves went in to the filling station with stretchers to remove the remaining bodies, all of which were unrecognizable.

Floods from several hours of heavy downpour submerged buildings and vehicles across Accra on Wednesday.

President John Mahama, who visited the area, said he was heartbroken by the heavy loss of lives and damage.

He blamed the floods partly on people building homes and businesses on waterways, blocking the city's drainage systems. Ghana's meteorological service there could be more rains on Thursday. (Writing by Kwasi Kpodo and Bate Felix; Ediitng by Angus MacSwan) 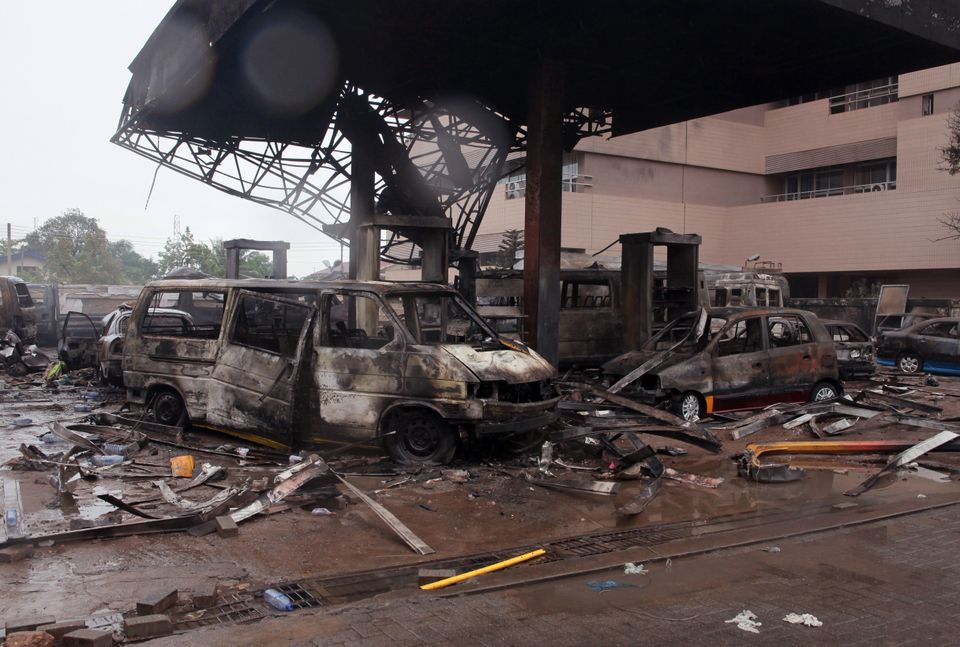 1 / 5
The remaining structure of a gas station after it exploded in Accra, Ghana, Thursday, June 4, 2015. (AP Photo/Christian Thompson)
ASSOCIATED PRESS