My mother looked at me, her eyes filled with tears. I wished that I could reassure her, stand up from my wheelchair and leave behind this shell of a body that had caused so much pain.

The rest of the world felt so far away when she said those words. She got up and left me in the silent room. I wanted to do as she bid me that day. I longed to leave my life.

As time passed, however, I gradually learned to understand my mother's desperation and forgive her. Every time she looked at me, she could see only the ghost boy who had been left behind after her once healthy son fell sick.

Aged 12, I had come home with a sore throat in January 1988 and never returned to school. In the months that followed, I stopped eating, started sleeping for hours each day and complained of how painful it was to walk.

As my body weakened, and so did my mind: First, I forgot facts, then familiar things like watering my bonsai tree, and finally even faces.

My muscles wasted, my limbs became spastic, my hands and feet curled in on themselves like claws.

I was completely unresponsive, and the doctors couldn't diagnose what had caused it.

I was treated for tuberculosis and cryptococcal meningitis, but no conclusive diagnosis was made. Medication after medication was tried -- to no effect. After about a year of tests, the doctors confessed they had run out of options. All they could say was I had a degenerative neurological disorder, and that my parents Joan and Rodney should put me into an institution and let my illness run its course.

Politely but firmly the medical profession washed its hands of me. We were in effect told to wait until my death released us all.

Age 14, I started spending my days in a care centre and going home each night. Two more years passed with me lost in my dark, unseeing world.

I lay like an empty shell, unaware of anything around me.

Then, one day, I started coming back to life. At first, there were just flashes as my mind began to awaken. By the time I was 19, it was fully intact: I knew who I was and where I was but my limbs were useless and my voice mute. Have you ever seen one of those movies in which someone wakes up as a ghost but they don't know that they've died? That's how it was, as I realized people were looking through and around me. I couldn't make a sign or a sound to let anyone know I'd become aware again. I was invisible -- the ghost boy. 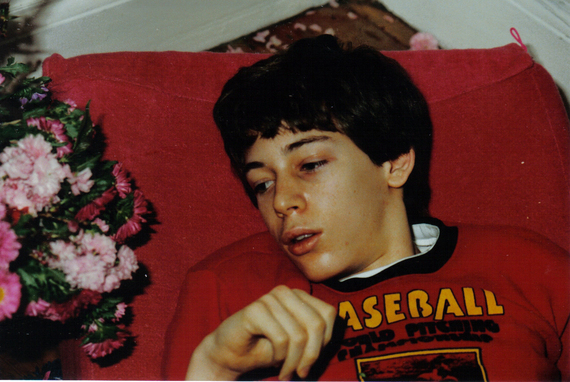 Slowly I regained enough control of my neck to jerk my head down and to the right, lifting it occasionally or smiling in reply to simple questions.

But people didn't realize what my new movements meant: They thought it showed only the most basic improvement. No one considered my improved responses might mean my intelligence was intact.

There was one person who offered me safe passage from my silent self: Virna van der Walt, a relief caretaker at the day center who used to give me aromatherapy massages. She was sure I could understand what she said because of the way I looked and smiled at her. Soon, she persuaded my parents that I should be tested to see if there was any possibility that I might communicate.

New York Times bestselling author of 'Ghost Boy: The Miraculous Escape of a Misdiagnosed Boy Trapped Inside His Own Body' www.GhostBoyBook.com