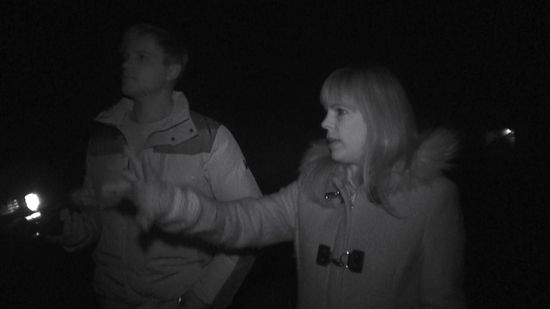 Whether or not you buy into paranormal investigations, there's no denying things have been getting spirited on social media regarding cast departures on Syfy's Ghost Hunters. And since news broke that Amy Bruni and Adam Berry were departing the nearly 10-year-old series, the ghosts of investigators past, present and yet-to-come have weighed in - and there seems to be evidence of drama and hurt feelings.

So let's break it down with what we know, what we don't know, and what we can speculate on.

Published yesterday, May 29, around 6 p.m. ET, Deadline reported Bruni and Berry were leaving the unscripted paranormal reality show to pursue their own ghosty projects. Deadline did not name its source, but it is likely one of the two principles, or their representation.

This is kind of a big deal for Ghost Hunters, which returns with new episodes in October. Since it premiered in 2004 - making it Syfy's longest-running reality show -- the series has experienced high turnover with female cast members with Bruni being around the longest (111 episodes, according to IMBD, since 2008). Berry, has been with the show since 2010, when he made the leap to the main series from the spin-off Ghost Hunters Academy. Together, Bruni and Berry, who is openly gay, have operated as a team on the show as well as representing diversity on a cast dominated by white, straight males.

And their announcement did not go unnoticed.

By 7:08 p.m. ET, TV psychic/medium Chip Coffey (from A&E's canceled Paranormal State and Psychic Kids) tweeted "HUGE NEWS!" with a link to the Deadline story. Former co-lead investigator Grant Wilson, who was with the show from the beginning before leaving in 2012, tweeted the "BIG NEWS!" at 7:50 p.m. that the duo would "bow out."

That phrasing is notable because team leader Jason Hawes -- who also serves as producer on Ghost Hunters and maintains control over the show's investigative team TAPS (The Atlantic Paranormal Society) - tweeted this at 10:15 p.m.:

Big differences between "Bowing out' and "Impossible demands" in this crazed world. 😉

His statement that there is a "big differences between 'Bowing out' and 'Impossible demands' in this crazed world" seemed to be a reply to Wilson's tweet. Not only does Hawes' tweet suggest contractual demands, but further posts intimate that it was his call to either reject those demands and push the two out. In response to a fan tweet about "out with the old, on [sic] with the new," Hawes replied, "Most Agree. I made the right call and it's gonna be a good one!" This was followed by a smiley face (with sunglasses, if you care). He additionally tweeted that show is "stronger than ever."

Reached for a statement today, Hawes said, "They are friends and like family to me."

"Their issue with their finances is between them and [production company] Pilgrim Films," he added. "I base my feelings for people on friendship and loyalty, not net worth or what some think it should be."

Kris Williams, former Ghost Hunters investigator, and one-time leader of the since-canceled Ghost Hunters International spin-off, appeared to take issue with Hawes' tweets. Less than an hour after his post, she posted that it "Says a lot about a 'leader' when they look to trash others who've done nothing but have their backs #ImpossibleDemands."

If Williams is Team Bruni/Berry, former cast member KJ McCormick, who left the show in 2013, appears to be Team Hawes - if his retweet of the "right call" post is an endorsement. He also retweeted the Pilgrim casting tweet.

Bruni and Berry themselves remained quiet about the Deadline story. In fact, most of what Bruni was posting on social media yesterday involved "making hard decisions," before the story broke, and teasing a "top secret" project with Coffey.

However, both posted statements today offering more details. They In very similarly worded statements they mentioned an "unpredictable schedule" and the toll the show took on their family. They also both included this identical statement:

"We were not fired. We were not 'let go' - we opted to move on. This was 100% our decision that we came to after some discussion with the production company."

Bruni added in a statement today that she is grateful for the time she spent on the show and the opportunities it brought her way.

"But loooking ahead has me so excited for everything the future holds," she said. "Adam and I have so many exciting projects, on screen and off that we're working on, I don't think anyone will have too much time to miss us."

Except maybe the production company. Pilgrim Studios, posted a casting call for investigators on its website yesterday. The notice was for show within the "franchise," but my guess is it's for the flagship. Pilgrim mentions a filming window that begins the end of June 2014. If this is for Ghost Hunters, that would suggest negotiations fell through fairly last minute before Bruni and Berry were to hit the road to film. It is reasonable to assume the episodes that will begin filming in June would be part of the series' tenth season.

That filming schedule, if it is forGhost Hunters, and the upcoming tenth season opens up a lot of questions, and room for speculation.

Syfy has not released a statement about the Bruni/Berry departure. But this apparent feuding on social media could present a problem for the network. Although it has moved away from paranormal programming, Ghost Hunters was once Syfy's favorite child. The show will celebrate its 200th episode, and tenth anniversary, in October. And although the show is likely winding down, or at least closer to its end than its beginning, it's a safe bet that Syfy would want to do something big to support that.

For instance, previously there have been live Ghost Hunters investigations for Halloween, and a 2010 special in front of a live studio audience at Rockefeller Plaza in New York City celebrated its 100th episode. So a 200th episode on the show's tenth anniversary during Halloween season, and the network's "31 Days of Halloween" programming block? Not even a skeptic should question that that combination has the makings of a big event.

Bruni and Berry have stated they are involved with the 200th episode, but would they and Hawes gather together for something like a live special? Moreover, are there any likely replacements that might pop up in the show's tenth season?

Neither Syfy nor Pilgrim Studios, which produces the show, owns TAPS. Since its inception, Hawes has emphasized that his team is about family, and that no one has told him who to hire. He has brought daughters Haley and Samantha on the show, as well as a childhood friend McCormick, who departed in 2013.

Again, this is pure speculation, but I doubt Hawes would want an unknown person on Ghost Hunters.

Williams would be the obvious choice. She is known to the audience, and is a strong female, but she has said she previously turned down offers to return to the show. If producers want to branch out a bit, Joe Chin is a stalwart investigator who had appeared on both Ghost Hunters and Ghost Hunters International as well. The same goes for Dustin Pari, an investigator who exited the shows and focused on his Christian ministry.

It is worth noting that Pari also teased "awesome" news just yesterday on Twitter, with the promise of more information soon. It could be totally unrelated, but the timing is curious. And while this might be a stretch, Hawes' catchphrase is "hawesome," so Pari's word choice is additionally intriguing.

There is so much awesome going on right now. I look forward to illuminating more information in the weeks to come. Just stay tuned here.

McCormick and Berry reportedly have no love lost between one another, and with his departure, Hawes might choose to bring him back into the fold. That retweet of the Pilgrim casting call certainly shows that McCormick is paying attention to what's shaking.

Beyond the Ghost Hunters franchise, but still within the ghost community, Pilgrim and Hawes could reach out to John Zaffis and/or Brian Cano from Syfy's canceled Haunted Collector. The show lasted three seasons, and there is a lot of shared fans on the same network. Zaffis in particular has a high profile of his own as a paranormal researcher, and after being a series lead, he probably would want top billing.

Whatever the result, the show will go on, and the ghost hunts will continue for now. But make no mistake, Bruni and Berry's joint departure from Ghost Hunters is stirring up activity in the paranormal reality realm.