While America celebrated the annual end-of-summer rite known as Labor Day weekend, a team of researchers spent the time searching a lake in northern Sweden for a "Ghost Rocket," an object that allegedly crashed there on July 31, 1980.

Bo and Liz Berg, pictured below, reported seeing an elongated, cigar-shaped object with two protrusions on its sides (see main image above), turn 180 degress and perform a controlled landing in the water of Lake Nammajaure, reports TheLocal.se, Sweden's news-in-English website.

"We heard this sound, like an airplane cruising along without accelerating," Bo Berg told GhostRocketsFilm.

"[It made] a swooshing sound. We figured it was a cruise missile -- a Soviet missile that was off course," Liz Berg told GhostRocketsFilm. "But it slowed down and turned. Then it landed on the lake and sank." 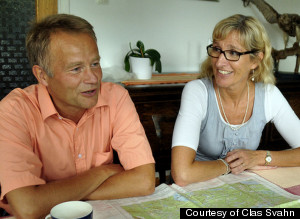 People have reported seeing unidentified objects crashing in Swedish lakes over the past six decades.

Many UFOs seen in 1946 were dubbed "ghost rockets" because they were reported as missile- or rocket-shaped. Some of these objects were thought to be German missiles captured by Russia during World War Two, but a definitive explanation was never found, according to numerous accounts.

More than 30 years after the Bergs' experience, Clas Svahn, chairman of UFO-Sweden, put a support team together of divers, a film crew and one of the original witnesses to the 1980 sighting, and headed to Lake Nammajaure this past weekend to try and find the unknown object.

The Ghost Rocket expedition prepares to search the Swedish lake.

"People mistake UFOs with flying saucers. There are many, many reports of strange things in the air," Svahn told The Local. "What we're interested in is explaining what they are. Every answer is a good answer."

A documentary is in production, following Svahn's efforts to unlock the mystery of the Swedish "Ghost Rockets."

In a video posted on Sept. 1, Svahn described some of the difficulties the team had with the murky waters of the lake, seen below, which caused them to end the expedition. 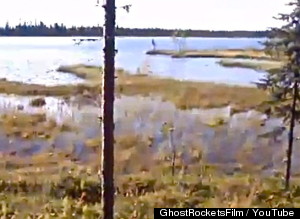 "It was difficult for divers to photograph underwater as it was quite muddy," Svahn said. "What was interesting was when they reached the spot where we think the craft sank, they found that the bottom was nearly bottomless. We don't know how far the mud goes down. At this point, we have no means of continuing our expedition -- we cannot go any deeper down in the mud."

The expedition divers also informed Svahn that if an object had landed on the floor of the lake, it would probably have sunk down a few meters in the mud, and it may still be there.

Svahn is already planning another trip back to the site, armed with different equipment to aid them in their task.

"We are still very certain that what Bo and Liz did see was a real craft, a real object, maneuvering -- someone was remote-controlling it, landing it."