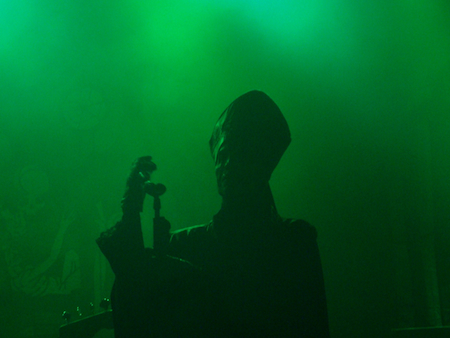 As a jazz musician and composer who grew up in the "classic rock" era, I found myself more attracted to those groups that were working with longer forms, complicated or unpredictable harmonies, meters, and rhythms, and strong musicianship; in other words, I listened to a lot of what we now call "progressive rock." I still enjoy listening to some of that music, but I'm also always on the lookout for new music in that style. It was in that pursuit that I came across the Swedish band Ghost B.C.

Ghost is a sextet (a fitting number, as you'll soon see) that describes itself as a cross of "death metal and pop music." There are certainly some elements of metal in their music, but nothing that even comes close to the skin-flaying assault of bands, for example, like  Meshuggah, Dark Funeral, and the covens of fellow travelers in this genre. The influence of the original metal band, Black Sabbath, can certainly be heard, but overall Ghost is far more "prog and pop" than it is metal. The sounds of groups from the classic rock era like King Crimson, Genesis, and Blue Oyster Cult as well as more recent groups like Porcupine Tree and Voivod are easily identified. There are also some overt and cheeky (given the content) references to '60s pop music, including that of the surf variety.

As if that weren't enough, they also rely heavily on one of the favorite motifs of the early 20C atonal expressionist composers like Anton Webern and Arnold Schoenberg. The motif is identified by music theorists as Forte Set 4-9 or (0167). This "set" is a collection of four pitches containing two tritones, a half-step apart, which is quite a dissonant collection of pitches. "Tritone" is the term used to describe the distance or "interval" between two pitches that are six half-steps apart, and it has a long and storied career in music owing to its inherent tonal instability and generally "spooky" qualities. For centuries, it was actually referred to as diabolus in musica-"the devil in music" or the "Devil's Interval." Additionally, (0167) is a set that cannot, like major and minor chords, be transposed to twelve different pitches; this set actually repeats itself when transposed at the tritone, so there are only six possible transpositions. Ghost's music is thus steeped in (0167) and its subsets. The set can be heard in many of their songs as part of the harmony and bass activity, but it can also be heard as the melody in Death Knell from Opus Eponymous, which is notable because it is such a dissonant set of pitches.

This surprising genre mashup is delivered without any of the "screamo" singing that is often associated with metal of the darker variety; in fact, Ghost's lead singer has a restrained, sweet-sounding tenor voice which is pensive and almost feminine in comparison to the guttural exhortations usually found in the metal genre. The singer's voice is austere and wistful, which complements the many memorable melodies and clever hooks that are found throughout, while it also provides sharp contrast to the many anthemic and muscular rock choruses.

And the lyrical content? I think it's clear that with Ghost, the lyrics really do matter. Here are some samples from their debut album, Opus Eponymous:

Lucifer, we are here, for your praise, Evil One. Satanas, we are one out of three, Trinity (from Con Clavi Con Dio)

Our Father, who art in Hell, unhallowed be thy name. Cursed be the sons and daughters of thine nemesis, who are to blame. Thy kingdom come, nemA [sic] (from Ritual)

Believe in One God we do, Satan Almighty, the Uncreator of Heaven And Evil and the invisible and the visible and in His Son, begotten of Father by whom all things shall be unmade...Unholy Ghost, overlord and taker of life, hear our Satan Prayer, Our Anti-Nicene Creed.  (from Satan Prayer)

Well, there's not much ambiguity there-Ghost is a band with a provocative message, and, unlike in the old days, you don't need to play anything backwards in order to ascertain what that message is. Apparently, however, worshipping Satan doesn't provide enough material for even two recordings; the lyrics quickly turn to related topics from the Halloween grab bag, which includes zombies, witches, and even a real life 16C sociopath serial killer, Elizabeth Bathory (who butchered hundreds and hundreds of young girls, purportedly bathing in their blood to "keep her skin youthful.") 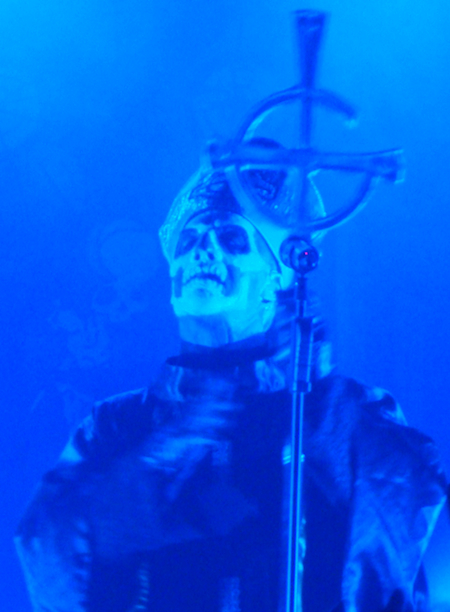 And then there is the theatrical presentation, which is quite striking and effective, and of course, over the top. The five instrumentalists (two guitars, keyboard, bass, and drums) are five "Nameless Ghouls" who dress (usually) in a black priest's robe with an avian face mask that makes them look like crow-faced medieval executioners. The star of the show is, of course, the lead singer "Papa Emeritus" who is, apparently, the Devil's Pope. He dresses appropriately, with full papal regalia which flaunts the upside-down cross that is part of Ghost's logo, along with accoutrements from Catholic Mass, like the ornate spherical Censer (incense burner) on a long chain. (For some reason, the Catholic Church-as opposed to the Anglicans, the Mormons, or the non-denominational suburban Mega-McChurches with their self-help, pop psychology liturgies-provides the best source material for devil worship.) He also wears a ghoulish plastic face mask that makes him look like a recently disinterred corpse, not quite yet fully given over to the worms. The face mask and makeup are very effective, much more so than the face makeup that artists like King Diamond or Marilyn Manson have worn. The mask hides the facial expressions completely, which gives Papa Emeritus a chilly detachment that places him "above" the crowd, not just physically because of his elevated position on stage, but also emotionally because of his inscrutable position behind the mask. He could be annoyed, bored, laughing, or frowning and the audience would be none the wiser. Only the eyes and ears show through the mask, and when Papa Emeritus sings, there is no movement in his implacable plastic face (indeed, we cannot know if he is, indeed, singing or if the vocals are pre-recorded).  This has a dehumanizing affect that is quite disconcerting and adds a great deal to the desired preternatural projection. The entire group is thus in disguise, which was possible for a band like KISS 35 years ago, but in the internet age, it seems impossible to maintain for very long. Still, the anonymity and the provocative garb are very effective in the creation of the group's stage personae (and, as an added bonus, if the drummer steals Papa's goth girlfriend, they can kick him out and no one in the audience will know that he has been replaced).

Given all of this, I was curious about the audience and the surrounding social milieu at an event like this, so when I heard that Ghost was performing at a venerable old haunt of mine, St. Andrews Hall in Detroit, I decided to attend. The audience was made up of about 350-400 people, mostly white males between the ages of 18 and 40, most dressed in black, with concert t-shirts from various other metal bands being the preference. Some had female companions, most did not, and I didn't see any pairs or groups of females at all. (There were two black men there, who were easy to spot, so let's add diversity to the list of "to do" projects for Hades' CEO.) Are these people really evil?  Or is this just some elaborate adult Halloween fantasy? Well, if it's the former, then Old Beelzebub has really lost his edge. This was one of the most polite audiences I have ever seen, certainly as polite as those attending symphony and jazz concerts. For example, my friend's drink was spilled when someone accidentally bumped into him. The guy asked what he was drinking, and then promptly showed up a few minutes later with a fresh drink in hand, along with his apologies. Later in the evening, some people started moshing, and when one of the moshers accidentally bumped into a non-mosher, he apologized profusely. 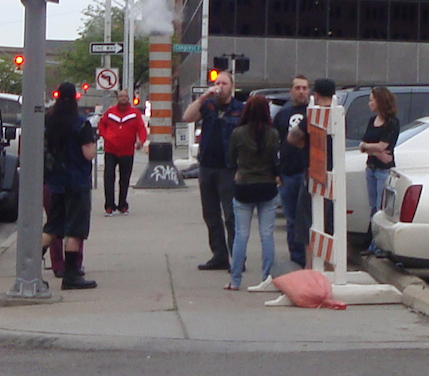 Ghost fans tailgating before the concert.
Of course, they're not the first musicians or artists to summon the Great Deceiver in their work. In literature, the three famous versions of the Faust legend, the first by Christopher Marlowe in the late 16C, followed by Goethe's in the early 18C, and then Thomas Mann's adaptation which was written during the Second World War. Classical composers in the last 150 years or so have also occasionally featured the Devil in their works. For example, Franz Liszt's Mephisto Waltzes, Anton Dvorak's opera The Devil and Kate, Alexander Scriabin's Satanic Poem, Igor Stravinsky's Histoire de Soldat, and George Crumb's Black Angels are some well-known examples. And pop musicians have done the same: Charlie Daniels' The Devil Went Down To Georgia, the Rolling Stones' Sympathy for the Devil, Van Halen's Running with the Devil, and of course the many metal bands like Black Sabbath, Slayer, Marilyn Manson, Megadeth, and others who have similar themes in their lyrics.

It's hard to take any of this seriously as actual Satan worship; indeed, when artists reference the Devil, it's generally done in a metaphorical or allegorical manner. The shock value of the demonic, however, is marketing gold that guarantees some kind of response and attention. Or at least it used to, but that doesn't seem to be the case anymore. I was wondering if there were going to be any church groups outside of St. Andrews handing out pamphlets or spraying holy water on the audience lined up outside as a sign of protest to the devilish deluge about to begin, but there was nothing of the sort to be found. It made me think back to the ridiculous days when preachers of various stripes spent time playing rock records backwards in order to tease an imagined satanic reference from the resulting garbled mess, or when Tipper Gore's organization, the Parents' Music Resource Center, in one of the most spectacular episodes of moral flatulence ever recorded, raged against pop music with their list of songs known as the "Filthy Fifteen," two of which had, gasp, "occult" themes (the other topics being, of course, sex and violence). Ghost's occultism is not only overt and proudly proclaimed, but it is also candy-coated in a pop rock package that's loaded with great melodic hooks. And yet, there's not a peep of outrage (although one notes that both of their tours in the US conspicuously avoid venturing anywhere near the deep South).

Still, it's a little unsettling to be in a room with several hundred people who are screaming "Hail Satan" and singing "Come Together, Together as One, Come Together, for Lucifer's Son."  There is nothing to fear, however, when the guy in the devil costume shows up at the office Halloween party, and the same is true for these bands and their fans. We see real evil far too often, and we know far too well what it looks like when it's unearthed-it's pathetic and banal, and it's not selling t-shirts at St. Andrews.