Once upon a time, in a land far, far away from reality, three misfit parapsychologists from New York City joined forces to combat paranormal forces, as a demonic spirit extermination squad fondly known as "Ghostbusters."

The genius (and Academy Award-nominated, I might add) story, which was born to the world courtesy of Dan Akroyd and Harold Ramis, proved slime-spewing monsters and adorably possessed cellists make for possibly the best plot points in cinema history. 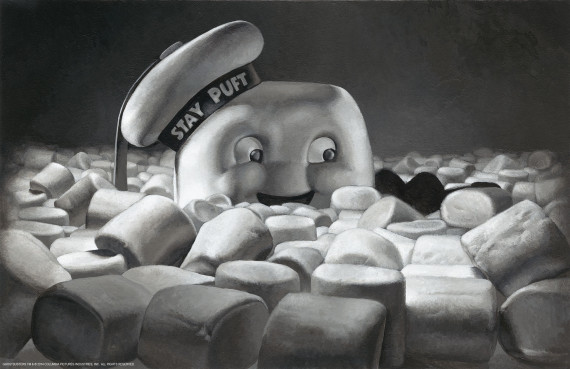 Let's not mince words here, "Ghostbusters" is an objet d'art that made us all wish spirits were actually haunting the halls of the New York Public Library, just so that we could see those proton pack-wielding heroes simultaneously crack jokes and chase after a dead librarian. Bill Murray, we love you, but you just can't top Peter Venkman.

So, you can only imagine the excitement we experienced when told of the pop culture art show to top all other pop culture art shows. Ahead of the 1984 film's 30th birthday, Los Angeles' Gallery 1988 is paying homage to demigods, firehouses, Rick Moranis and containment units in a "Ghostbusters" Anniversary exhibition. A cigarette dangling from the lips of Ray Stantz has never looked so sweet.

For those not lucky enough to be in the vicinity of Southern California, the gallery has graciously sent us a preview of some of the fantastic fan art-esque masterpieces on view. We suggest you blare Ray Parker, Jr.'s "Ghostbusters" theme song (which, fun fact, landed itself a number one spot on the Billboard Charts back in '84) and let images of the Stay Puft Marshmallow Man wash over you as you gaze upon the pure visual ecstasy of this collection.

Refuse this wondrous art homage and disaster of biblical proportions awaits you. We mean Old Testament, wrath of God type stuff. Fire and brimstone coming down from the skies! Rivers and seas boiling! Forty years of darkness! Earthquakes, volcanoes. The dead rising from the grave! Human sacrifice, dogs and cats living together! Mass hysteria!

Alright, alright, you get the point.

More:
Artsghostbustersgallery 1988On Our Radar