When fans first heard that a new Ghostbusters movie was on the way, they were quick to judge, making the film's first trailer the most disliked trailer in Youtube history. Ouch! The movie has finally hit theaters and now all of you will get to be the judge on if that title was deserved or not.

The film stars Kristen Wiig, Melissa McCarthy, Leslie Jones and Kate McKinnon as the new group of gals ready to take on the paranormal. They're joined by their not-so-bright-but-good-looking receptionist Kevin played by Chris Hemsworth. The film is also co-written and directed by Paul Feig, so with a lot of the Bridesmaid team reuniting, there are bound to be some good laughs.

Overall the film is bearable. It doesn't live up to the original, but if you're going into it with an open mind, you'll have a fun time at the theater. Sometimes the jokes drag on or are unnecessary but because they're delivered by such pros, you can forgive them a little.

The 3D is amazing as are all the new gadgets we get to see the Ghostbusters create. The movie is not amazing and it's not completely horrible, but it's forgettable.

To watch our full review, check out the video above and be sure to visit shineon-media.com for more.

Did you see Ghostbusters? What did you think? 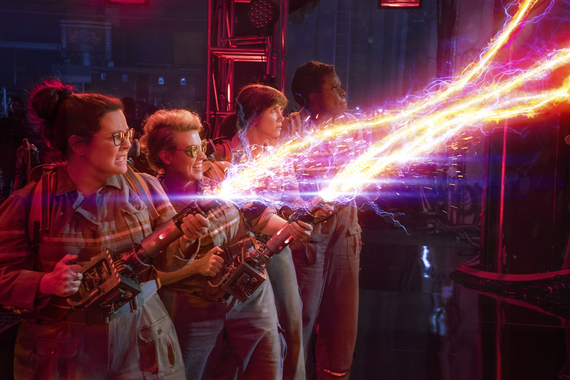