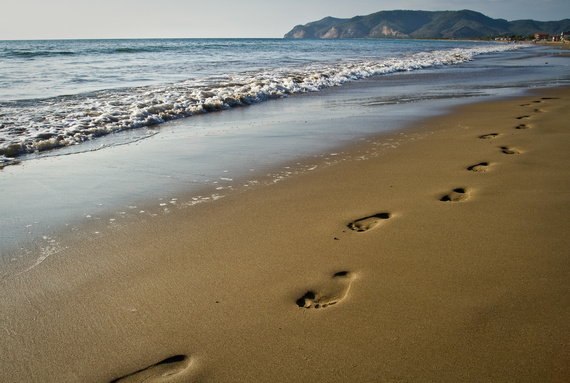 Linda, 27, started dating Dave, 31. Though things got serious pretty quickly, they appeared to be on the same page. They'd met each other's friends and some family. During - what would be their last conversation - they planned a day trip out of the city together for the next day. He sent her a text saying he was on his way to her apartment to pick her up. As time progressed and despite her numerous texts to him, he never responded. And he never showed up. For the next few days, she sent several texts to make sure he was okay. She never heard from him again. Poof!

Brian, 32, had been dating Kayla for a couple of months. They'd started off texting and emailing as they got to know one another. Once they met in person, they started dating. Although they didn't speak of being exclusive, it felt and seemed that way to Brian. They had several dates and communicated often. There didn't appear to be anyone else. Brian was totally smitten. After a weekend getaway, they said goodbye to one another at the train station. They texted each other when they got home and talked about the next time they were to get together. He felt very strongly about Kayla and felt she had similar feelings. After that night, she disappeared from his life. Despite his attempts to communicate with her, he heard nothing in return. He was devastated.

One of the paradoxes of our fast-paced digital dating culture is as quickly as you can connect with someone, you can disconnect. In a blink, your relationship can go from a promise to a poof. Date long enough, and you too, may encounter a 'ghoster' - someone you've bonded with who suddenly disappears in a phantom-like way. Unfortunately, experiences like Linda's and Brian's are incredibly - and sadly - all too common.

People who just up and disappear have one very important trait in common--they're avoiders. They avoid confrontation at all costs and equally don't want to deal with their own uncomfortable feelings. The emotional maturity that comes with giving the person you are dating an ounce of common courtesy is not in their emotional vocabulary or repertoire. Their emotional immaturity trumps the desire to do the right thing and come clean about wanting to move on. Even a simple two line text - which bring some clarity and closure isn't in their radar. Doing the right thing - no matter how uncomfortable - never dawns on them.

When you're the one who's been ghosted, you are overcome with feelings of rejection, anger, and confusion. At first, you may actually worry about the other person's well-being. Is he or she safe? Did they get hurt? I just want to make sure they ok - then I can move on. You end up waiting to hear something, anything. You constantly check your phone for texts, calls, and emails after reaching out It's torture. Eventually, though you discover the pictures and status updates on Facebook or Instagram that yes, he/she is alive and well. Yet, before anger sets in, you initially experience self-doubt and blame. Did I imagine that things were going great? What did I do that could have turned him or her off? I did hear her or him correctly that they would call me make plans, right? You end up waiting to hear something, anything.

But here's the thing: YOU didn't do anything wrong. And all this energy you're expending? The ghoster deserves not one minute of it. Don't waste your time wondering if he/she is alright. They are. They have moved on without a blink of an eye. As you sit and worry, they are sleeping at night. If you have made a concerted effort to reach out and heard nothing in response, then just let it go. You will find quickly by doing this, how much better you will feel - physically, psychologically, emotionally.

If you start to go down the rabbit hole of negative thinking or thinking about all of the exchanges bear in mind: their behavior speaks volumes about them and very little about you. Just imagine what it would be like to be in a relationship with this person and what it would be like to communicate with them - difficult, at best. Think about how they would they actually treat you. A lack of common courtesy in the beginning would become magnified as bigger issues developed in the relationship.

Word to the wise: at the end of the day, consider yourself lucky!

Although dating is really, really hard, you have to stick with it and deal with situations like this. Eventually, you will meet your someone. You just have to learn to let the jerks go first because you deserve better. Way better!

More:
divorceghostingtexting and relationships
Newsletter Sign Up
An essential daily guide to achieving the good life
Subscribe to our lifestyle email.
Successfully Subscribed!
Realness delivered to your inbox