Over the years, Brownsville, PA has become somewhat of a legendary destination for those who document the rise and fall of the Rust Belt. Brownsville was a major railroad yard and coking center up through the first half of the 20th century, with its population peaking in 1940 at around 8,000.

Like many early Rust Belt boomtowns, suburban development and changes in the steel industry ravaged the town as the century moved on, causing almost complete destruction to a once bustling social and economic center. 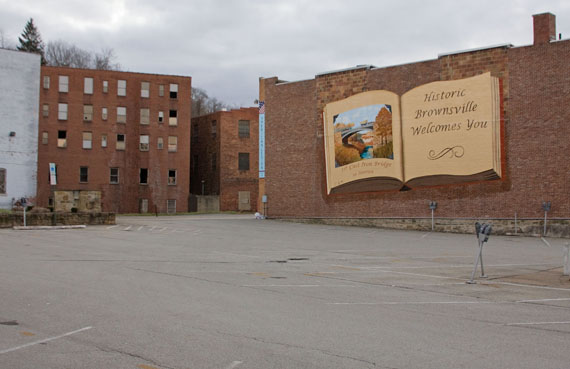 There hasn't been much activity in Brownsville in some years, but to visit the town, it's impossible not to be affected by its remnants and by its ghosts.

On my visits to the town, Market Street, which is the town's main drag, has always been nearly vacant. Many have ventured here to photograph the Brownsville "Neck," as it is often referred to. The twist of the main thoroughfare, lined with boarded up and vacant buildings, can't help but ratchet up the drama and mystery of the area.

There have been many promises over the years of money for development, be it private or from government sources, though it has yet to materialize. 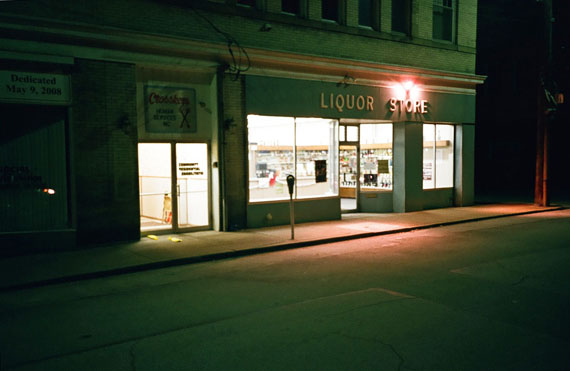 During a trip to Brownsville late last year, I noticed that a mural had recently been painted along some of the empty storefronts. I'm sure the mural, even in its rawness, was meant to be some kind of message of hope but, to me, within its surroundings, the depiction of a line of zombie-like men, women and children staring toward the sky, while walking to the sun, was rather creepy (in a Neil Young, "After the Goldrush" way). But, of course, that could just be my warped mindset. 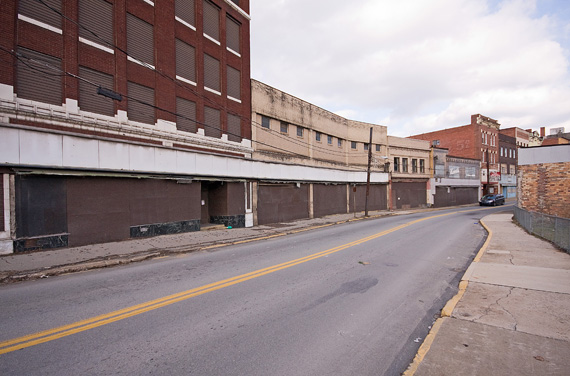 Some years ago, during my first visit to Brownsville, I followed Market Street as it wound under a bridge and came to one of the few remaining open businesses, which is called Fiddle's Confectionery. Fiddle's is an old fashion soda fountain that still has a lunch counter and old wooden booths. I walked in, sat down in one of the old wooden booths and ordered lunch. Apparently, many years ago, the local high school kids were allowed to leave the school during their lunch breaks and the kids would pack into those old booths at Fiddle's.

As I sat there, I couldn't help but be transfixed on the many carvings that had been scratched into the booths over the years. Most seemed to have been done decades ago by the teens that used to hang out at Fiddle's. Transfixed on the old scratchings, as if they were hieroglyphics on a newly unearthed Egyptian tomb, I noticed an etched heart that within it had a crudely scratched, "Tom + Debby '72." Staring at it, I felt an overwhelming sadness. Did the young lovers know what time had in store for their home and their way of life in the factory valleys along the Monongahela River? 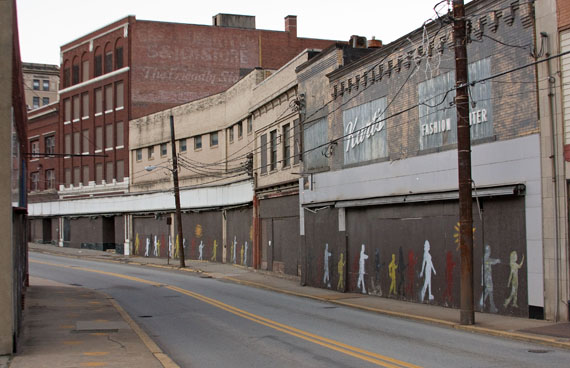 Tom and Debby are only two of the hundreds of lives represented in those booths.

I've been back to Brownsville many times since that initial visit, but that first one was to stay with me. I couldn't get that roll call of hope I'd seen at Fiddle's out of my mind. I thought about my own lost youth and the hopeful innocence that we all eventually get past the point of recovering. And, of course, I thought about Tom and Debby, whomever they were, and all of the other faded stories of Brownsville and towns like it.

Voting Made Easy
Register to vote and apply for an absentee ballot today
Register now
More:
paPittsburghTravel BlogsPhotography photos
Newsletter Sign Up
An essential daily guide to achieving the good life
Subscribe to our lifestyle email.
Successfully Subscribed!
Realness delivered to your inbox