Halloween gives me the heebie-jeebies.

My awkward relationship with the holiday dates back a few decades, to a beloved jack-o-lantern who met a premature death in the incinerator room of my childhood apartment building in Queens, New York.

I've since moved to Brooklyn and outgrown the Alley Cat, China Doll (a particularly sparse year in the unenlightened 1980s) and World Trade Center (I was one half of a pair) costumes of All Hallow's Eves past, and I'm starting to see the holiday in a new light. 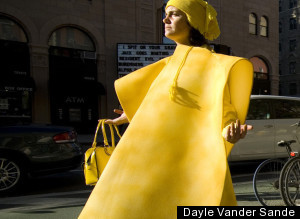 Mostly, it's thanks to the knish.

In case you're not familiar, it's a wrapped dough, baked or fried and stuffed with potato, buckwheat groats, vegetables or meat. It has origins in Eastern Europe and was popularized by Jewish immigrants on the Manhattan's Lower East Side and Brooklyn's Coney Island in the early 1900s.

Knishes were a staple of my upbringing, the one reliable link to Jewish heritage in a secular family, with a religious identity largely rooted in what we didn't do. We didn't celebrate Christmas. Didn't say the Our Father, didn't go to Mass. Except that one time when Patty Appel invited me to stay over on Halloween. The following morning, All Saints' Day and a Sunday, I sat next to her in the pews and followed my grandmother's instructions: Don't kneel. And don't take Communion.

Last year, while visiting Poland in search of traces of my grandparents' lives, I landed in the eastern towns of Bialystok and Knyszyn (sounds like knishn) and unearthed details that linked the iconic Jewish food to Catholic mourning rituals.

I'm still not big on trick-or-treating, but the knish is a good conversation piece and a way to get people talking about ghosts they'd rather not touch. Last week, at a party on Second Avenue on New York's Lower East Side, a guy dressed as professor asked me why I was clad in yellow foam with a mustard dispenser dangling around my neck. "See that multi-plex down the block?" I asked. He nodded.

It used to be a Yiddish theater, I told him. There's still a huge Jewish star on the ceiling. And this street was called Knish Alley. Kosher dairy restaurants populated the strip from 14th Street to Houston. Now, it's mostly dumplings and pierogies. But I'm proud to inhabit the knish suit and to re-infuse Jewish history into a hipster zone -- and Halloween.