Most young girls, when faced with the prospect of 1,000 Barbie dolls, would be over the moon to keep them all to themselves.

Gianni Graham, however, wants to give them away.

The 9-year-old girl from Norfolk, Virginia, has collected hundreds of the popular dolls to give to children in foster homes and homeless shelters in her area.

"I feel like girls in shelters should have the same as girls not in shelters," Gianni told WTKR.

Whitney Graham, Gianni's mother, told The Huffington Post that her daughter came up with the idea a few days after Christmas, while playing with her own Barbies. She decided to start the donation with two dolls of her own, which had been given to her for Christmas, reports WTKR.

"Gianni explained to me that the Barbie can be a friend to the young girls when they feel that they have no one to talk to," Graham told HuffPost.

Gianni's ultimate goal is to collect 1,000 Barbies for 1,000 little girls. According to her Instagram, she has collected almost 600 brand new dolls so far. She also plans to include a personalized letter to accompany each doll.

WE ARE AT 500 BARBIES AND COUNTING THANKS EVERYONE WHO HAS STARTED SHARING THE STORY AND HELPING THE CAUSE FOR ALL LITTLE GIRLS TO FEEL THE POWER OF LOVE & UNITY!! #1kBarbiesfor1kgirls #dollsfordolls #everydolldeservessadoll @1kbarbiesfor1kgirls

People from all over the country have mailed and dropped off Barbies for Gianni to donate. Once she reaches her goal of 1,000 dolls, Gianni plans to personally deliver them to the shelters and mail them to a list of little girls living in foster homes.

Keep up the good work, Gianni! You'll reach your goal in no time.

If you want to donate Barbie dolls to Gianni's cause, visit her website here. 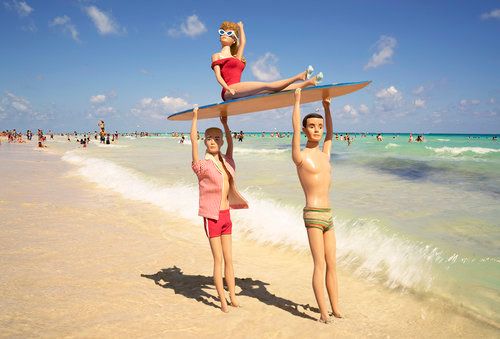