MIAMI (Reuters) - Florida officials trying to eradicate the Giant African Land Snail, one of the world's most destructive invasive species, plan to deploy a new weapon in the battle - Labrador retrievers.

State agriculture authorities say they hope the dogs will add to their success in fighting an infestation of the slimy snails, which were first spotted by a homeowner nearly two years ago and quickly swept through the Miami area.

On Wednesday, officials said that since the start of an aggressive extermination campaign they have collected 128,000 of the snails, which can grow as big as rats and devour plants as well as stucco and plaster in a hunt for calcium they need to grow their big shells. In large numbers, the snails can cause extensive structural damage to buildings.

"We see a lot of strange things in Florida and this one makes the top of the list," said Florida Agriculture Commissioner Adam Putnam. "It is a very serious pest."

Putnam said $6 million has been spent so far to eradicate the munching mollusks, which may have been introduced to Florida by a Miami Santeria group, a religion with West African and Caribbean roots that was found in 2012 to be using the snails in its rituals.

The snails can carry a parasitic rat lungworm that can cause illness in humans, including a form of meningitis, although no such cases have been identified in the United States.

To stamp out the snails, a team of 45 people regularly fans out across Miami, sometimes using rakes and getting down on their hands and knees to hunt for them.

The snail fighters are also using bait, chemical treatments and experimental traps to root out the mollusks, helped by phone calls from local residents who report sightings.

Joining them soon will be canine detectors, including a Labrador retriever being trained to sniff out the snails.

"They're very good at detecting the Giant African Land Snail," said Richard Gaskalla, the head of plant industry at the Florida Agriculture Department. "So we're building four-legged technology into this program as quickly as we can."

The Giant African Land Snail has no natural predator, posing a challenge to eradication efforts. But it can give off a strong odor that dogs can be trained to detect.

Officials showed off a black Lab named Bear who is expected to soon wrap up his three-month training and start accompanying the snail hunters. Two other Labradors are also expected to be trained, they said.

Officials say they believe they have contained the snails to the Miami area.

Gaskalla said the program was showing success, with a sharp drop in numbers found.

"The number of detections this last year were in the thousands; now they are down to around 200 to 300 a week," he said. 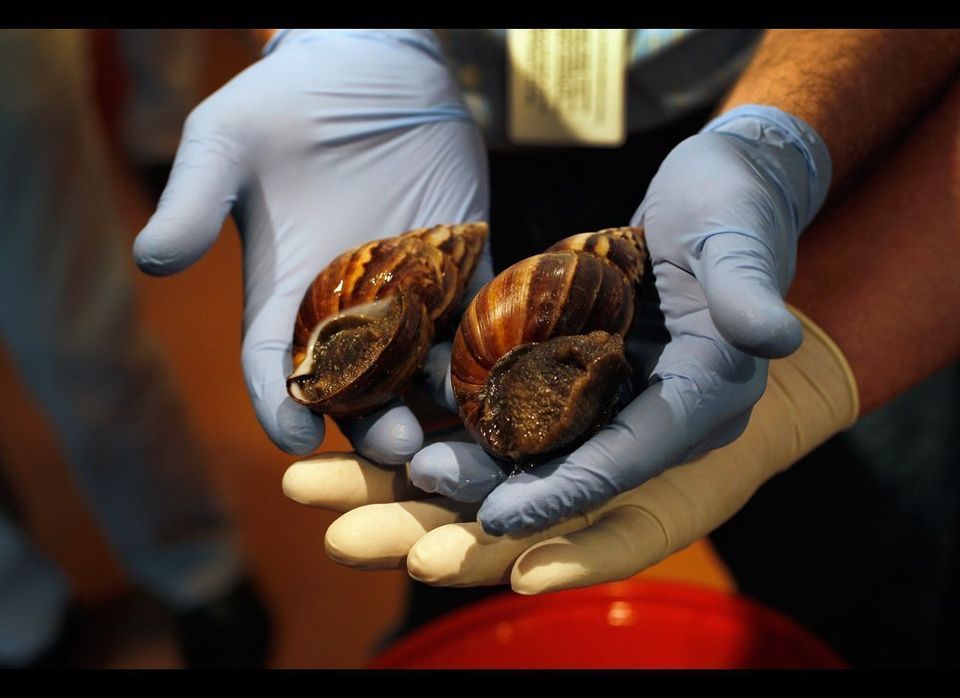