Miami, with its beautiful beaches, warm temperatures and vibrant nightlife, might be known for its fast-paced atmosphere, but now residents are finding themselves facing an infestation of sluggish proportions: Giant African Snails.

The snail (Achatina fulica) can grow to be 10-inches long, 4-inches wide, and has made its way into the tropical city for the third time since 1966, NPR reports.

Their presence is putting agriculture officials on high alert, as authorities ask residents to report any sightings of "suspicious snails."

The Miami Herald reports that the snails "are considered one of the most damaging land snails in the world.":

They eat at least 500 different types of plants, lay about 1,200 eggs a year, and can carry a strain of non-fatal meningitis. Prolific breeders, they contain both female and male reproductive organs and live as long as nine years.

They can be particularly devastating to agricultural areas and ecosystems and result in trade bans. Hailing from Eastern Africa, the snails are only allowed into the United States with special permits and for scientific research.

The snails can eat through stucco and plaster, and one Miami resident observed that they "multiply 'faster than rabbits,'" according to ABC News. Each snail can lay about 1,200 eggs.

Two sisters first reported the creatures to authorities last week, and about 1,000 snails have been collected from a one-square-mile radius, the Miami Herald reports.

Smuggling the snails into the U.S. is illegal, MSNBC reports, pointing to a study finding "Florida has more non-native amphibians and reptiles than anywhere else in the world, and that the pet trade is the main cause."

The large snails made their first appearance in South Florida in 1966 after a boy brought three from Hawaii and set them free in Miami. It cost the state about $1 million to remove all of the snails, the Miami Herald reports.

The seized snails are being put in freezers "in an effort at 'humane death,'" an agricultural official told the Herald.

In January, reports surfaced about Giant African Snails being used to monitor pollution from a sewage incinerator in Russia. The snails were being used because "they [had] lungs and breathe[d] air like humans." Some animal rights activists were outraged over the reports. 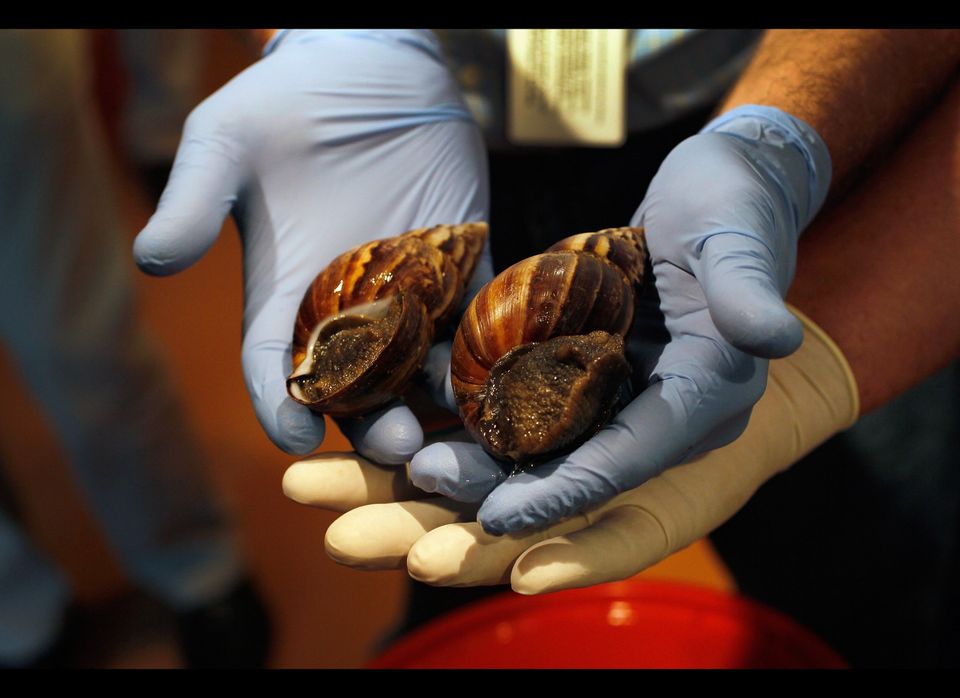 1 / 5
Giant African land snails in Miami
Giant African land snails are shown to the media as the Florida Department of Agriculture and Consumer Services announces it has positively identified a population of the invasive species in Miami-Dade county on Sept. 15 in Miami, Fla. The Giant African land snail is one of the most damaging snails in the world because they consume at least 500 different types of plants, can cause structural damage to plaster and stucco, and can carry a parasitic nematode that can lead to meningitis in humans. (Photo by Joe Raedle/Getty Images)
Getty