As Colorado cleans up the fallout from mass flooding that forced evacuations, destroyed roads and cut off towns from help, last week residents took to the streets to document the aftermath. Although more than 1,000 people are still unaccounted for in the flood, the clean-up does have a lighter -- albeit probably stinkier -- side to it.

Reddit users "BostonRon" and "KnightRedditer" posted photos of what appears to be a huge grass carp that washed up on the side of a road after streams and creeks overflowed near Longmont, Colo. 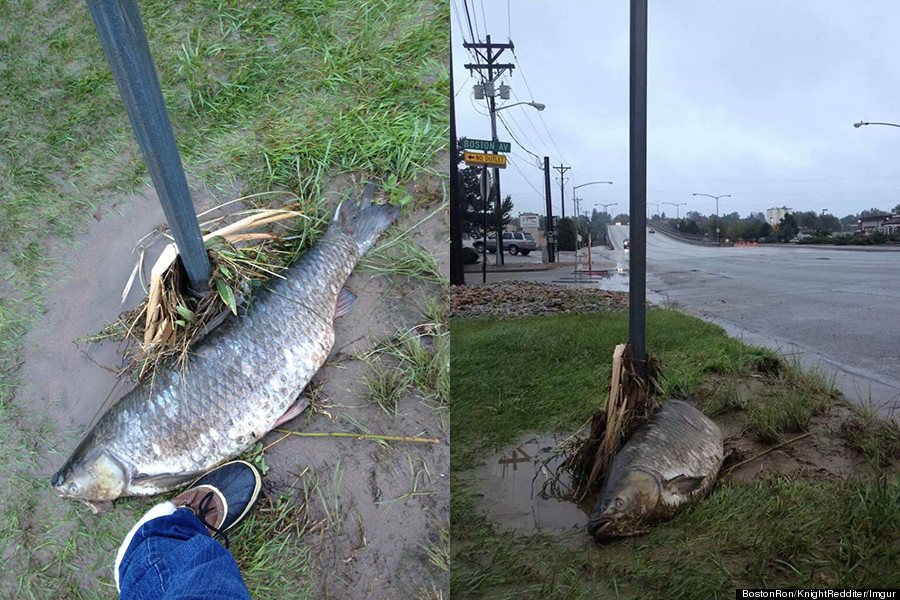 Another size comparison of how large this fish is. I'm a size 11. Easily 3 feet. #longmontflood #stvrainflood pic.twitter.com/KQcb49FGX5

Braun said that the large carp wasn't the only unusual thing he's seen over the course of the flooding:

@dutchvowels yes, I was there when the flooding began near a field, and about 20 feet ahead of the wave was a tsunami of field mice running.

Previously:
BostonRon, who claims to have taken the original photo, wrote that the fish measured about three-and-a-half feet. Different angles show that the carp is definitely oversized, but they can grow even bigger. The largest grass carp caught in Florida measured more than four-and-a-half feet long, but specimens found in China have reached five feet and about 100 pounds.

Grass carp were introduced to the United States as aquatic weed control, but are now considered an invasive species.