After the discovery of a giant eyeball that had people scratching their heads, researchers from the Florida Fish and Wildlife Conservation Commission said it most likely came from a swordfish.

"Based on its color, size and structure, along with the presence of bone around it, we believe the eye came from a swordfish,” Joan Herrera, curator of collections at the FWC’s Fish and Wildlife Research Institute in St. Petersburg, said in a statement.

Because of straight cuts found around the eyeball, staff also believe it was removed by a fisherman and tossed into the ocean. Genetic testing will be done on the eye to confirm the species of fish, according to the FWC.

The softball-sized blue and purple eyeball was found by a man who was walking along Pompano Beach on Wednesday. He called FWC, which sent a staffer to pick up the eyeball. Large enough to fit into two cupped hands, it was put on ice and sent to the research center in St. Petersburg.

"This is definitely an unusual situation, where an eye would be found independent of any other body part," Carli Segelson, FWC spokeswoman, told the Huffington Post.

Swordfish are deep-sea dwellers usually fished around this time of year around the Florida Straits, according to the FWC, and are overfished around the world. Fish heavier than 200 pounds tend to be females, and the state record was a 612 pound, 12 ounce swordfish caught near Key Largo.

In April, a 638-pound swordfish was caught off Marathon, but it was disqualified as the heaviest-caught swordfish since an electric reel was used.

PHOTO GALLERY
It's a Swordfish Eye!
Download
Calling all HuffPost superfans!
Sign up for membership to become a founding member and help shape HuffPost's next chapter
Join HuffPost

Giant Eyeball On Pompano Beach Belonged To A Swordfish, FWC Says (PHOTOS)
It's a Swordfish Eye! 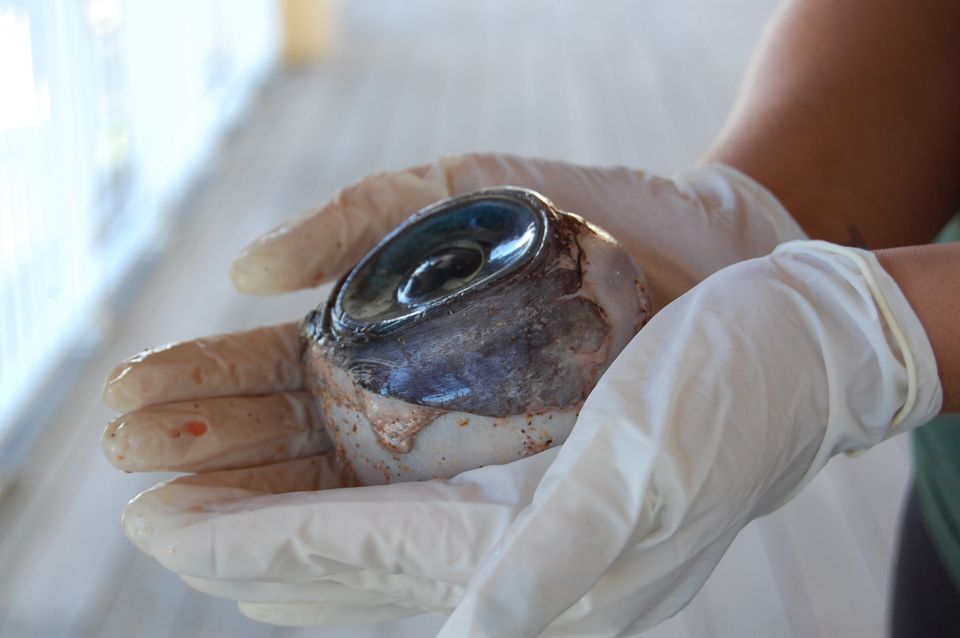