This week's Animal Oddity comes to us courtesy of my cousin Jamie. As the resident Naturalist in my rather large family, I often get questions about nature and wildlife. Today Jamie posted this photo to my Facebook wall and asked me if I knew what the heck this giant creature was and specifically if it was a moth or a butterfly. 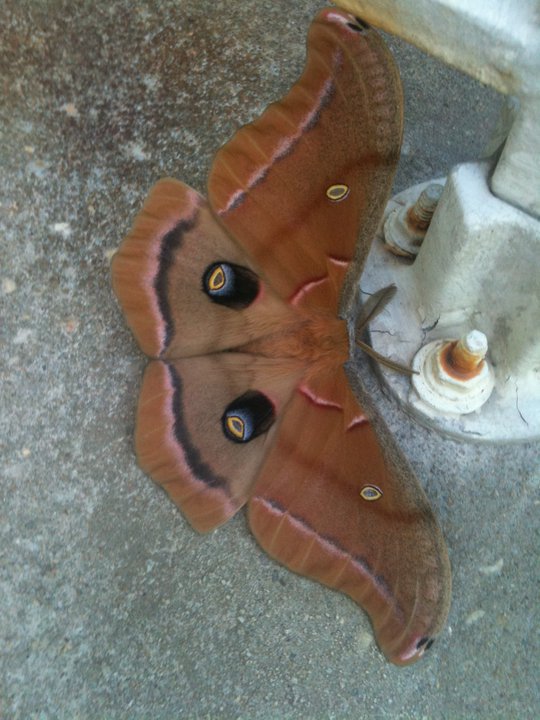 Can you identify it? I'll give you a few hints. The first is that it's a moth, not a butterfly. How do you tell a moth from a butterfly, you ask? There are a couple of easy things to look for to help you answer that question.

Moths have feathery antennae while butterflies have straight, thin antennae that end in a slightly larger round tip (they're called "club antennae" for that reason). Also, when resting, moths hold their wings flat to the ground while butterflies hold them closed over their back. There are exceptions but this applies the vast majority of the time. With this knowledge one look at the photo will tell you this animal is a moth.

All moths start life out as caterpillars. In the case of this species, their large green caterpillars feed on oak, willow, maple and birch leaves. After gorging themselves on leaves and growing to near-dinner-sausage size, the caterpillars spin a silken cocoon in which they metamorphose into the winged adult. This is another thing that distinguishes moths from butterflies. Moth caterpillars spin a cocoon while butterfly larvae form a leathery shell called a chrysalis.

The adults of this moth species, however, don't feed at all; in fact they lack mouths that would allow them to sip on nectar like other moth species. Their sole purpose in their adult phase is to mate, and in the case of females, to lay eggs. They take care of this task as quickly as possible, and then die knowing that they've done their part to ensure that there will be a next generation. Pretty odd indeed!

A few final hints: this photo was taken in New Jersey and the common name of the species was inspired by Greek mythology. Armed with this knowledge, can you identify the species?

Thanks to everyone who made a guess about the identity of this wonderfully large moth. It's a Polyphemus moth (Antheraea polyphemus) a member of the Saturniidae, or giant silkworm moth, family. (Those of you who guessed this was a Luna or Cecropia moth were close; they are also the Saturniids.) The name of this moth is a reference to the cyclops Polyphemus from Greek mythology and comes from the large spots on the hindwings of the moth, which look like large eyes and help deter predators. Polyphemus moths are found in every state except Arizona and Nevada, so be on the lookout for these giant silkworm moths in your garden.