The mythical kraken might not have been around long enough to take down ships, but it very well may have been able to feast on dinosaurs larger than school buses.

Mount Holyoke College paleontologist Mark McMenamin has found evidence to suggest that the Ichthyosaur, a snaggle-toothed creature that grew to be larger than a school bus, was actually prey for a far more mythical sea monster: the kraken. According to the Geological Society Of America (GSA), McMenamin believes the nine 45-foot-long skeletons found at Nevada's Berlin-Ichthyosaur State Park were victims of the creature.

The researcher's theory stems from the unique behavior of some modern octopi, which arrange the bones of their prey in an organized fashion.

From the GSA's press release:

In the fossil bed, some of the shonisaur vertebral disks are arranged in curious linear patterns with almost geometric regularity, McMenamin explained.The proposed Triassic kraken, which could have been the most intelligent invertebrate ever, arranged the vertebral discs in double line patterns, with individual pieces nesting in a fitted fashion as if they were part of a puzzle.

Prior to these developments, the best guesses scientists had about the deaths of these nine Ichthyosaurs focused on environmental causes, including stranding or toxic plankton. The GSA also states that it wasn't until a few years ago when a pacific octopus was observed killing sharks in an aquarium that scientists ever considers this other possibility. That observation grants further credence of McMenamin's theory.

Think an octopus taking down a shark sounds a little ridiculous? Well you can actually see it for yourself below.

UPDATE: WIRED Science questions the findings, citing a lack of evidence behind the theory:

"In this latter case, a lack of encrusting invertebrates would seem to indicate that the skeletons came to be preserved in deep water environments with low levels of dissolved oxygen. The initial cause of death for the marine reptiles is unknown, but there is no good evidence that the exceptional sites were, to borrow from Ringo Starr, giant killer octopus gardens."

McManamin's evidence to suggest a kraken-like creature killed the Ichthyosaurs found in Nevada: 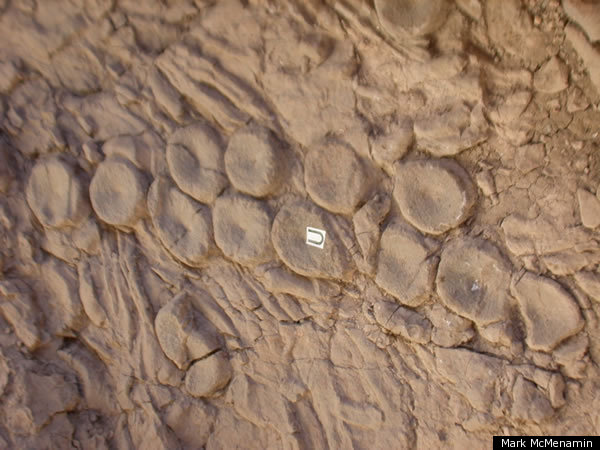 Perhaps the giant kraken taking down an Ichthyosaur went something like this: