A beloved Jewish summer camp was nearly destroyed by one of the wildfires currently ravaging California ― but its iconic menorah has survived.

The giant metal menorah at Camp Hess Kramer in Malibu was captured in photos standing tall on a hilltop overlooking the ocean, surrounded by the charred remains of grassy fields.

On Sunday, camp leaders posted an image of the menorah to its Facebook page and pledged that the fire wouldn’t stop the community from gathering this summer.

“The location will be a different and temporary one, but we will be together this summer,” they wrote in the post. “There will be camp. Then, we will rebuild.”

Other Jewish summer camps in Malibu also reported damage from the flames ― including Camp JCA Shalom, which is run by the Shalom Institute, a Jewish education and retreat center.

The Woolsey fire has swept through 97,000 acres of Ventura and Los Angeles counties, destroying about 435 homes and businesses, the Los Angeles Times reported Wednesday morning. At least two people have died in that wildfire.

In Northern California, 48 people were confirmed dead Tuesday night after the Camp fire ripped through the town of Paradise. Many more are still missing. The fire is now the deadliest in the state’s modern history.

Leaders of the Wilshire Boulevard Temple Camps announced on Facebook that nearly all the buildings at the site were lost. No one was hurt in the blaze, since the camps were evacuated late Thursday, along with their Torah scrolls, camp director Seth Toybes told HuffPost in an email late Tuesday night.

Since 1952, generations of Jewish Americans have attended the Wilshire Boulevard Temple Camps, forging lifelong friendships and memories while learning how to be proud of their religious traditions. The camps became a prototype for other Jewish summer camps across the nation.

The camps were the brainchild of the temple’s Rabbi Alfred Wolf, a prominent Jewish and interfaith leader who escaped Germany in 1935 as anti-Semitism was rising in his homeland. In 1950 he rented Presbyterian facilities and organized a summer camp for Jewish youths in Los Angeles.

The rented camp had many crosses on its property. So when Wolf opened Camp Hess Kramer at its current location in 1952, its leaders erected wooden menorahs around the site. Toybes said that through this ancient Jewish symbol, the leaders wanted to remind campers that “this was a safe place for Jews to be free.”

“The United States granted Jews freedoms of practice that stood in stark contrast to Nazi Germany and our founders were proud of that,” Toybes said.

Over the years, the camps also became a beloved retreat for non-Jewish youths ― including young leaders in the Chicano movement of the 1960s.

The Wilshire Boulevard Temple Camps’ menorah before the fire:

Many of the wooden menorahs erected around the site, including Camp Hess Kramer’s last surviving original menorah, were destroyed in the fire, Toybes said. He added that the metal and concrete outdoor menorah likely survived because it was built to withstand the elements.

Over the years, that menorah has become a symbol of the camp community.

“The menorah stands on our hillside as a symbol to our campers, staff and others that we are Jewish and proud of this,” Toybes said.

In the wake of the Woolsey fire, he said, he thinks the menorah is helping the community rally together.

“I believe that people are not only feeling inspired that it survived the blaze but emboldened to rebuild this space that has meant so much to so many, Jews and non Jews alike over the years,” Toybes wrote.

Alumni of the camps have been posting on social media to mourn the destruction and reminisce about their time there.

i spent several summers at #CampHessKramer as a kid. this is absolutely devastating and it’s amazing that the menorah is still standing. it’s a beacon of hope and a reminder of our toughness. we will come back from this...we always do. #WoolseyFire #California https://t.co/cvlHuaP2Z9

So sad..generations of Jewish families remember this camp with great fondness, including me and my son..

2. I became a more confident person because of my experiences and friendships created while working at CHK all those summers. My heart is broken but #wewillrebuild #camphesskramer #WoolseyFire

Toybes said that he doesn’t yet have an estimate of the cost of the damage to the site. As of Tuesday night, people from the camps had not been able to survey the site because of fires in the area.

Rabbi David Eshel, the camps’ rabbi, reminded his community during a Saturday night prayer at the Wilshire Boulevard Temple that fire has played an important role in Jewish history. He urged the community to remain hopeful.

“We remember God spoke to Moses through the burning bush to inspire our people to freedom. God led us through the wilderness with a pillar of fire,” he said. “This flame will not destroy. … Rather, this flame will light our way to a bright, bright future.” 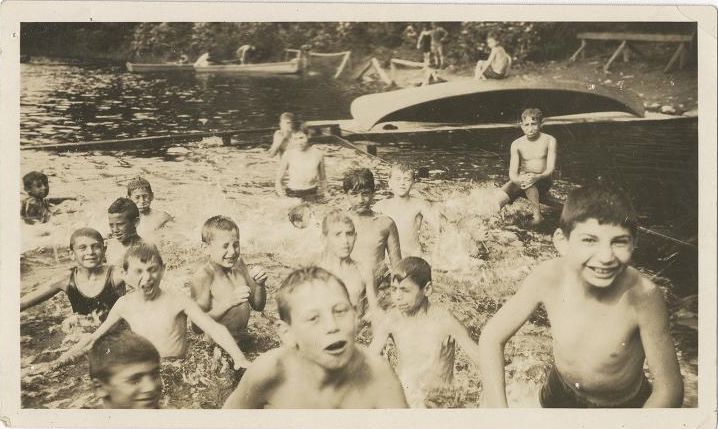 1 / 9
Children playing at Camp Wakitan, from the Records of the Hebrew Orphan Asylum of the City of New York.
Courtesy of The American Jewish Historical Society