When Ai Hin the panda started showing signs of pregnancy earlier this year, the world got pretty darn excited. Giant pandas are endangered creatures, after all, and they also happen to be notorious for their reluctance to breed in captivity.

Even the panda's caretakers at the Chengdu Research Base of Giant Panda Breeding were jazzed about the potential birth and reportedly planned the first-ever live broadcast of a delivery of panda cubs. Unfortunately though, it looks like Ai Hin won't be starring in any such live stream in the near future because, it turns out, she is not actually pregnant.

She may even have been faking it. 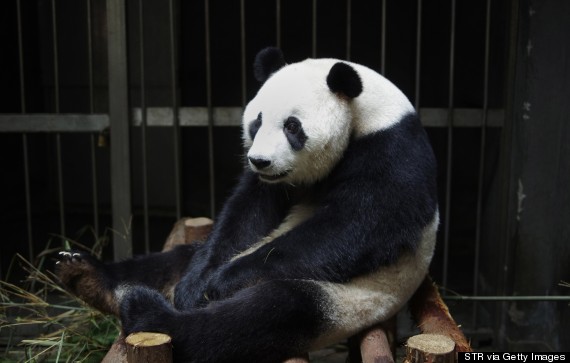 This picture, taken on July 17, 2014, shows giant panda Ai Hin sitting in her enclosure at the Chengdu Research Base of Giant Panda Breeding in Chengdu, in southwest China's Sichuan province.

According to Xinhua News, Ai Hin's caretakers say the panda recently started acting normally again after two months of exhibiting tell-tale pregnancy signs. Experts have speculated that the panda may have been pretending to be pregnant to reap the benefits of having a cub in the oven.

"After showing prenatal signs, the [panda] 'mothers-to-be' are moved into single rooms with air conditioning and around-the-clock care," said Wu Kongju, an expert at the Chengdu Research Base, per CNN. "They also receive more buns, fruits and bamboo, so some clever pandas have used this to their advantage to improve their quality of life."

But was Ai Hin really pretending for all this time?

At least one panda expert thinks not. Leaping to Ai Hin's defense this week, Zhang Heming, director of the China Research and Conservation Center for the Giant Panda, told the Guardian that the panda's behavior was likely "more of a hormonal issue than a deliberate ruse."

"This phenomenon occurs in 10 to 20 percent of pandas," he said. "After the mother panda is inseminated, if her health isn't so good, the pregnancy will terminate, but she'll still behave as if she's pregnant."

As Zhang notes, pseudo-pregnancies are fairly common in the panda world. In 2010, for instance, Smithsonian's National Zoo announced that one of its giant pandas, Mei Xiang, was not actually pregnant, despite having shown signs for months.

Mei Xiang had "elevated levels of the hormone progesterone; she lost her appetite and slept a lot; and she even built bamboo nests and cradled objects as if they were cubs," said the Christian Science Monitor at the time.

In the end, however, it was discovered that Mei Xiang was not with panda cub. What's more, that was reportedly her fifth false pregnancy.

According to a 2010 LiveScience report, scientists "don't know why pseudo-pregnancies happen, or if they have evolved for an evolutionary purpose."

"In a sense there's no answer, but there is speculation that perhaps pandas' bodies just rehearse pregnancy all the time," Lisa Stevens, curator of primates and pandas at Smithsonian's National Zoo, told the news outlet.

Or maybe they just really, really like being pampered?

This post has been updated with comments from Zhang Heming, director of the China Research and Conservation Center for the Giant Panda.