A T-Rex might have seemed like a mere snack to the animal whose gigantic jaws are now on permanent display in England.

"This was the most powerful predator that ever lived -- it could bite a small car in half," said paleontologist Richard Forrest.

Scientists estimate the animal, with an 8-foot-long skull and massive, steel-like jaws riddled with sharp teeth was likely more than 50 feet long and resembled a monstrous crocodile.

After nearly a year and a half of careful preparation, the skull was unveiled this month at the Dorset County Museum by naturalist and broadcaster Sir David Attenborough, who referred to the event as "a cause for huge astonishment, particularly when you know ... that this extraordinary animal had a brain the size of a peanut."

"Just imagine a creature like that surging through the oceans," Attenborough said. "Amazing."

After the skull was cleaned, scientists used the size of the holes that its muscles had passed through to determine the sheer power of the animal. "I could stand in this hole," said Forrest, featured on the Dorset Council video of the skull unveiling. "And that's where the jaw muscles went -- that's what drove the power which drove this massive jaw."

Yet despite all their careful examination, researchers are still puzzled about the true identity of the once-ferocious beast.

"We still don't know actually what it is. Is it a new species?" wondered Richard Edmonds, the Dorset County Council Earth sciences manager.

"There's another whole year's worth of scientific study to be done to compare it to existing specimens before we can determine whether or not it is actually something new to science."

Quite A Mouthful: Giant Sea Monster Skull Might Be The Largest Ever
Dorset County Pliosaur Photos 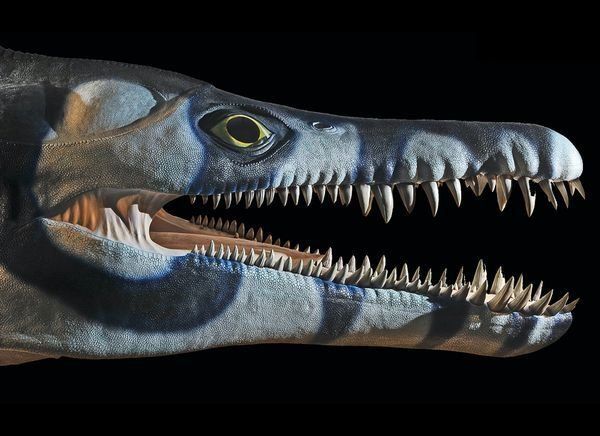