It's huge, fast, venomous and the size of a human face. For some, Poecilotheria rajaei, a giant tarantula discovered recently in Sri Lanka, is the stuff of nightmares.

But for wildlife advocates, the spider might represent another cause for conservation: The tree-dwelling spider is threatened by habitat destruction.

"They are quite rare," Ranil Nanayakkara, co-founder of the Sri Lankan organization Biodiversity Education and Research, told Wired. "They prefer well-established old trees, but due to deforestation the number have dwindled and due to lack of suitable habitat they enter old buildings."

Visit Wired for more details about the giant tarantula discovery. 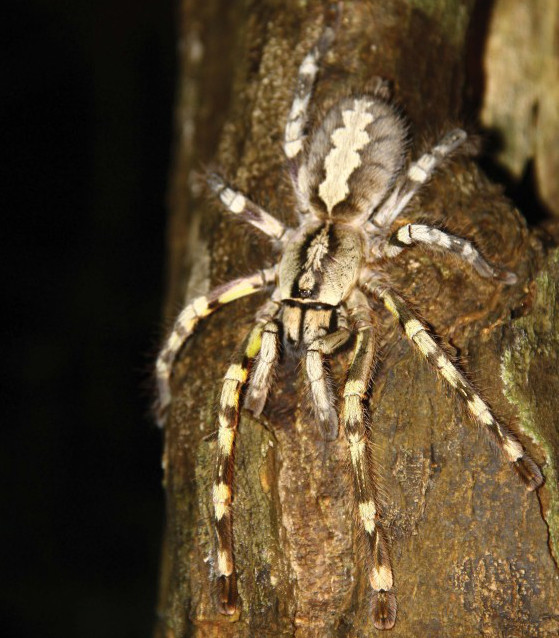 Habitat encroachment could mean the spider comes into more regular contact with humans. A dead specimen of Poecilotheria rajaei was found by a villager in 2009, and live spiders were recently discovered in an old hospital, among other places, Wired notes.

Deforestation is one of Sri Lanka's chief environmental concerns. According to a 2009 report by the Food and Agriculture Organization of the United Nations, about 80 percent of Sri Lanka was once covered by closed canopy natural forest. By 1994, forest cover had decreased to 24 percent. The report linked deforestation to reduction of the island nation's biodiversity, among other issues.

Although some experts would like to conduct DNA sampling to determine whether the giant tarantula is in fact a new species, taxonomical evidence strongly suggests that it is a member of the genus Poecilotheria.

Poecilotheria are tree-dwelling tarantulas that known for their bright coloring and potent venom.

In 2010, biophysicists at the University of Buffalo identified a protein in tarantula venom that showed promise as a possible treatment for muscular dystrophy.

According to National Geographic, the goliath birdeater tarantula of South America may be the largest spider in the world, with a leg-span that can reach up to a foot in diameter.