The San Francisco Giants reached the 2012 World Series thanks to their uncanny success in the back-to-the-wall "If Necessary" games of the National League playoffs. Switching gears from resilient to dominant, the Giants then won the World Series without Games 5 through 7 ever being needed.

The Giants capped a 4-0 sweep of the Tigers with a thrilling, extra-inning 4-3 win in Game 4 at a rain-dappled Comerica Park in Detroit. As he has been doing all postseason, Giants second baseman Marco Scutaro came up with the key hit, singling home Ryan Theriot with the go-ahead run in the top of the 10th inning. Bearded San Francisco closer (no, not that one) Sergio Romo then closed out the series-clinching win, locking up the Giants' second title in three seasons (2010) and the seventh in their 129-year franchise history.

"Tonight was a battle. I think tonight was a fitting way for us to end it because those guys played hard," Giants backstop Buster Posey told Ken Rosenthal of FOX on the field after the game as his teammates celebrated around him. "They didn't stop. It's an unbelievable feeling."

The apparent ease with which the Giants dispatched the Tigers in the World Series was in stark contrast to the difficulties they faced in the Division Series and the League Championship Series. The Giants began their march to the world championship by dropping two games to the Cincinnati Reds at AT&T Park in San Francisco. After reeling off three straight wins to reach the NLCS, the Giants then dropped three of the first four games to the St. Louis Cardinals. With the familiar feel of the proverbial wall at their backs, the Giants then won three straight off the defending World Series champions to win the National League pennant.

"For one, we didn't allow doubt to ever creep in," said Pence, who arrived in San Francisco via an in-season trade and became the team's fiery dugout "Reverend" during the postseason. "You know, the thing that made this team so special is just playing as a team, caring for each other. We had our backs against the wall and we knew it wasn't going to be easy. It's not supposed to be."

Coming off a sweep of the New York Yankees, the American League champion Detroit Tigers were well-rested and the oddsmakers' favorites in the 2012 Fall Classic. The Tigers had their pitching rotation lined up, with reigning AL Cy Young winner Justin Verlander going in Game 1. The Tigers also had the first Triple Crown winner since 1967 and one of the game's premier power hitters protecting him in the lineup.

But they didn't have the Panda.

Pablo Sandoval blew up all the pre-series predictions and etched his name in the MLB record books with a three-homer performance in the opener. With the rotund third baseman nicknamed "Kung Fu Panda" driving in four runs and pitchers Barry Zito and Tim Lincecum delivering sterling performances, the Giants captured Game 1, 8-3. They never looked back, shutting out the Tigers in the next two games to grab a commanding 3-0 lead.

After the Tigers took their first lead of the series by way of a two-run homer by Miguel Cabrera in the third inning of Game 4, Posey struck back. The presumptive National League MVP answered with a two-run shot of his own to put the Giants back on top in the sixth. On base when the 25-year-old Posey crushed that Max Scherzer pitch was Scutaro. Of course, he was. The journeyman infielder had a postseason for the ages, leading Tim Kawakami of the Mercury News to describe him as the "indefatigable soul of this Giants’ World Series title."

The NLCS MVP, Scutaro may have been the unlikeliest star of the Giants' postseason run but he was hardly the only one. In 2010, Sandoval got just three at-bats as the Giants defeated the Texas Rangers to win the World Series. In 2012, the Panda took home World Series Most Valuable Player honors by hitting .500 with three homers and four RBI in 16 at-bats.

"You learn," Sandoval said after the game, via ESPN.com. "You learn from everything that happened in your career. ... We're working hard to enjoy this moment right now."

Sandoval and Scutaro shared the World Series spotlight with Barry Zito and Tim Lincecum, two former Cy Young winners who were considered anything but dependable entering the postseason. The Giants proved in the Division Series and the League Championship Series that they can never be counted out, winning six straight elimination games. After reaching the World Series by such a precarious path, even the most mercurial of Bruce Bochy's Giants showed that he could be counted on.

"Detroit probably didn't know what it was in for," Giants general manager Brian Sabean told reporters after the game. "Our guys had a date with destiny."

Whether it was their penchant for statistically unlikely series comebacks, Hunter Pence's "triple-contact" hit or a ball fortuitously bouncing off a base, these Giants certainly seemed to be enjoying a charmed postseason. In Game 4, however, their win was constructed from more mundane components: solid starting pitching, lockdown relief and timely hitting. Giants starter Matt Cain gritted through seven innings without his perfect stuff. Relievers Jeremy Affeldt, Santiago Casilla and Romo then combined for three scoreless innings.

With two outs in the bottom of the tenth, Miguel Cabrera came to the plate as the Tigers' last hope. The 2012 Triple Crown winner stared at the final pitch of the World Series. After Romo had run the count to 2-2 with five sliders, he froze Cabrera with an 89-mph fastball.

Cue the celebrations in San Francisco.

"I think we never found our confidence at home plate," said Cabrera, via The Associated Press. "It was not the same game we played. We could not find our game in the World Series."

Addressing reporters during his final postgame press conference of the season, Tigers manger Jim Leyland made clear the Giants' resolve and results were the stories of the postseason, rather than any struggles by the players in his dugout. 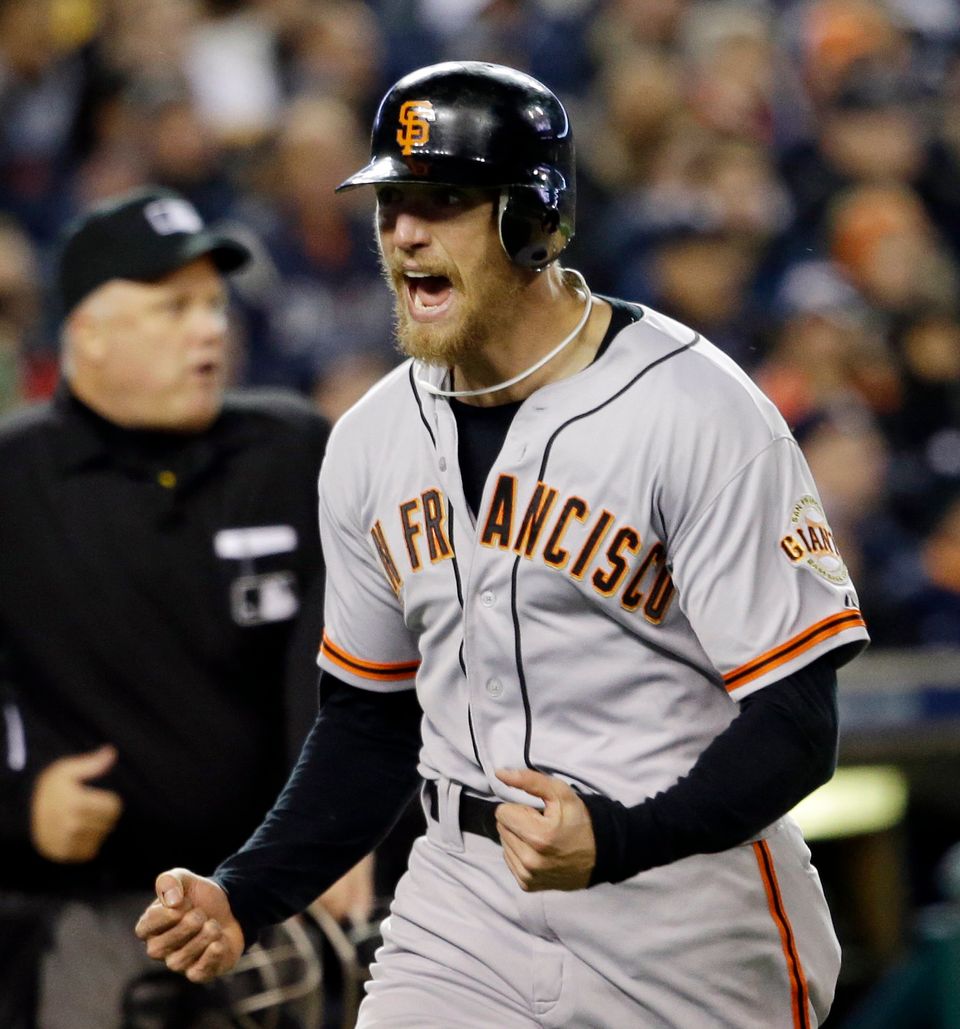