All this discussion of our current "gig" economy has probably got Jelly Roll Morton, Charlie Parker, and every other pre-sixties jazz musician rolling in their graves. I can hear them bellyaching:

"A gig economy? There ain't enough nightclubs to support that many gigs!"

There is a fair amount of speculation about where the term "gig" came from, but it's generally agreed that it started showing up in mid-twenties to refer to one-night engagements by jazz musicians. Orchestral musicians did not refer to their concerts as "gigs," nor did opera singers or marching bands.

Eventually musicians of all kinds began differentiating their "gigs" from their "day gigs," that is, the jobs they needed to pay the rent. Those "day gigs" are now referred to as "gigs" in the broader context, but the "one-night stand" aspect remains.

As such, the "gig economy" refers to the growing number of hourly, daily, weekly or monthly-rate jobs that are fueling today's economic growth. That doesn't mean that someone won't refer to his or her nine-to-five salaried employment as a "gig," but those W2 full-time jobs are not what is being referred to as "gigs" in the gig economy. 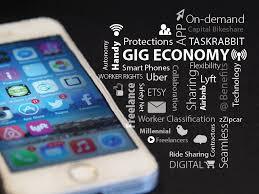 Gigs are generally performed by "freelancers," a term that originated with the advent of mercenaries back in the days of the Roman Empire, when a man with his own lance could offer his services to the highest bidder, "free" of any political allegiance.

The same could be said of today's freelancers in the workforce: we could have a gig with Google for a couple of months, then cross the street and work for Apple for a while. Or, we can join one of the many online "matchmaking" sites that may have us gigging for a half-dozen different customers on any given day.

The freelance taxi service, Uber, has become the poster child for the gig economy. But the truth is that gigs today can be found in virtually any industry:

There are even gig-getting apps for at-heart inventors and engineers, like Amazon's Mechanical Turk, which allows users to tackle all sorts of technical challenges with creative solutions.

The other relatively new aspect of the gig economy is the ability to get paid "on-demand" for services rendered. For giggers, be they Uber drivers, freelance writers, homemakers, coders, or what have you, the benefits of the on-demand payment model - vs. waiting for a paycheck every two weeks -- means bills get paid on time and overdrafts, hopefully, become a thing of the past.

So What's In It for Boomers?

For someone who has spent most of their life in an office and getting a bi-weekly paycheck, matching contributions to a 401K, paid vacation and health bennies, making the transition to gigging can be a bit of a shock. Whether we're choosing the flexibility of a gig over the security of a nine-to-five, or we're simply shown the door at age 55, the chances of being at loose ends are pretty high. Even if we're fortunate enough to have a robust retirement package, and have managed to stay relatively frugal, it's rare to have stored up enough cash to last a another 25 years, or longer.

Many of us may be relieved of our full-time duties as staffers only to return as contractors to continue doing the same job, more or less, we were doing before. This is a great boon for the company, of course. They can take advantage of years of company know-how, while leaving the personnel management tasks to the contracting firm. The contracts can range from bill-by-the-hour scenarios to the equivalent of a salaried job, and can last anywhere from a couple of weeks to a year.

On the opposite end of the spectrum are the true on-demand gigs: per project or by-the-hour arrangements that may complete in as little as one hour. These are the types of jobs that the "matchmaking" sites generally traffic in.

Sites like Fiverr.com, Freelancer.com, and many others like eLance, Tongal, Scripted and Guru put professionals together with employers for various creative tasks. Others, like Workfast provide office personnel, much like the Kelly Girls temp workers of the past.

A recent study predicts that the number of Americans gigging will double to 7.6 million people by 2020, and that approximately 25 percent of those gigs are being handled by Boomers. So, almost two million Boomers will be relying on their smartphones and laptops to find gigs, do the work, and get paid.

From long-term contracts to hourly gigs, workers in the gig economy have few if any of the legal protections or benefits staffers enjoy. Uber drivers, recognizing their value to the corporation, filed a class-action lawsuit wherein they claim that they have been misclassified as independent contractors, thereby avoiding the payment of expenses the drivers incur such as gas and vehicle maintenance.

The issue of employment classification has labor departments worldwide, and particularly in the U.S., scrutinizing the nature of the gig economy. In a nutshell, such independent contractors or "1099 workers" do not get the same benefits as W2 employees, such as health benefits, overtime pay and sick leave pay. As the 2016 presidential election nears, it has become apparent that current labor department standards have not kept up to speed with the growth of the gig economy.

While some position the dichotomy as a struggle between innovation and employee protection, the current situation has the potential to hang giggers out to dry, necessitating discussion of a possible third classification of employment, somewhere in between W2 status and 1099.

New laws governing labor will require the next Congress to enact legislation. Meanwhile, actively enforcing existing laws is a priority for U.S. Secretary of Labor Tom Perez, who claims that 79 million dollars in back wages were recovered in 2015 alone.

The good news is that Hillary Clinton is well aware of the careful work that will be required to ensure giggers are treated fairly. Her opponent, given his historically unfair treatment of independent contractors in his own business, is likely to favor anything that keeps the employer in control.

The Disappearance of the Company Man

There was a time when getting a job at IBM, GE, Ford, or any US or European blue chip company was considered a "job for life." While we weren't necessarily required to shop at the company store that Tennessee Ernie Ford once sang about, we enjoyed a great many benefits for our loyalty.

At the same time we were expected to look and behave a certain way (IBM required a white shirt and blue suit well into the seventies). The company's "values" were framed on our office walls, and when we turned 55 we were given an engraved gold watch with the company logo and, way back when, a fat pension.

We may think those days are long gone, and in some ways, they are. That's not to say that companies aren't buying loyalty, particularly when resourceful millennials figure out they can make more, and have more freedom, as giggers. Still, given the fierce competition for resources, tech companies in particular are rolling out the perks on the red carpet in hopes they can keep their best and brightest on the payroll.

For Boomers, the question -- to gig or not to gig -- isn't as relevant to us as it is to our kids. For us, it's gig or hit the golf course, or maybe a little of both. There's no question that there are more ways for us to leverage our professional skills in retirement than ever before.

Meanwhile, let's hope our kids will take their long-suffering, road-weary saddle-sore parents into account when making their choices. Wouldn't that be nice?