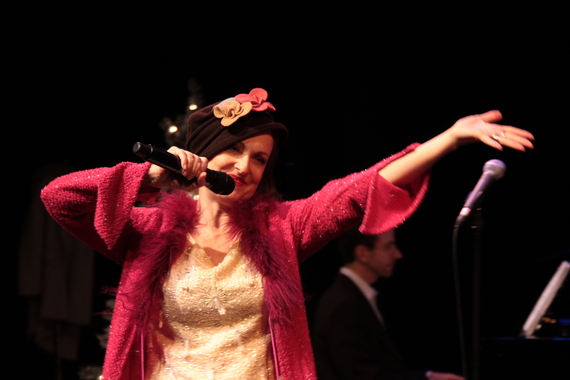 If it's Christmas in LA, it must be Cabaret Noel. This week, actress, singer and director Gigi Bermingham presented her annual celebration of Christmas song at Upstairs at Vitello's Jazz and Supper Club in Studio City. Bermingham is the daughter of a French mother and American GI father who met in France during World War II. Her first language is French and she brings a Gallic insouciance to the performance. Her voice is rich and melodious, just husky enough to enrich both the melancholy and jauntiness of French chanson. Her collaborator and husband, composer Matthew Goldsby, also enlivens the evening with a number of original compositions.

Bermingham and Goldsby wisely mix English and French songs, and some that are familiar to American audiences but sung in French, like "Le Petit Renne au Nez Rouge," also known as Rudolph the "Rednose Reindeer." Bermingham performs a haunting version of Marc Heyral and Henri Contet's "Le Noel de La Rue," which describes the plight of a poor child roaming the streets on Christmas. She also compares American and French Christmas celebrations, and performs French Christmas songs like "Petit Papa Noel" and "Chanson pour Noel."

Goldsby's compositions range from the witty to the musing and impressionistic. "What'd Ya Get Me?" and "I Know What You Want for Christmas" are hilarious riffs on what Christmas is often really about, while "Les Champs de L'Amour" and "Tiny Little Snowflake" are reflections on the beauty and longings of Christmastime. With the blending of traditional and contemporary, of French and American traditions, Cabaret Noel is a memorable journey through time and culture. And if you close your eyes, listening to Bermingham's French serenades, you can almost imagine yourself on a side street in Paris or in a little town in Normandy or Provence at Christmastime.