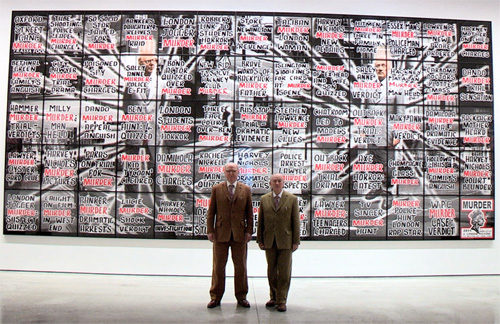 It's a brisk spring afternoon and Gilbert & George stroll into White Cube Bermondsey with a sense of purpose and in sync, as if they have rehearsed this several times in preparation for a walk down the aisle. They talk to the gallery's press officer with some level of familiarity, which makes me think that perhaps there is a little bit of normality lurking behind the eccentric figures.

But as soon as we start the interview, it becomes clear that the ever-charming duo is just a touch beyond normal. They are both weird and wonderful. Their latest gallery show, London Pictures is a product of 3,712 newspaper bills they've pilfered from newsagents across east and north London, from which they've based the 292 photographic self-portraits featured in the exhibition.

"All of the London Pictures are based on us, stealing, one by one, 3,712 posters from outside of several newsagents shops," says George.

Gilbert adds: "For six years, every day, we had to steal three posters a day because nobody wanted to give them to us. So one of us had to go into the shop to distract the seller, and another would be outside, stealing the posters."

Exploring themes the artists have scrutinized in the past: death, hope, life, fear, sex, money, race and religion, London Pictures celebrates the lives and deaths of everyday people. "Normally, these people are featured on the poster for one day, sometimes one week yet the tragedy in the family lives on, forever, but nobody is there to witness it. But in these pictures, forever they will be represented in some way."

After a run in Hong Kong followed by London, London Pictures have now moved to New York, where Gilbert & George will be showcasing their first show since 2004. Spread across the Lehmann Maupin locations as well as the Sonnabend Gallery, it could arguably be their biggest exhibition following their retrospective at Tate Modern in 2007.

London based but global in scale, George says that their message is applicable the world over. "It is called London pictures, but it could also easily be in New York, Paris, Johannesburg, Hong Kong or Sydney."

We caught up with Gilbert & George to talk about their latest exhibition, their favourite mayor, the meaning of happiness and their odd home habits:

Despite the pictures being about individual news stories from the past, they're quite prescient. Do you think they relate to what's happening in the city at the moment?

Gilbert: We just finished them before the riots. The design was finished exactly the night of the riots. So in some way we saw it coming, because when you start to see headlines mystery body found in canal, body found in canal, or body in canal man charged, horror of body in suitcase killing, it's just extraordinarily modern. If you look back in time, life has not changed a lot.

George: We believe that these pictures are very much past, present and future. You could have texts like this hundred of years ago, you can have them today, and I'm sure in a hundred years' time, people would still be stabbing, raping, robbing each other. We think that we live in a super liberal society. We can buy any book we want, we can see any movie, we can travel to any country. In London, you can eat the cuisine of any nation on earth. We have enormous freedom, but there is a price to pay for that. And it may be that the disaster of negative activity is the large price we pay for our freedom. There are countries where you aren't even allowed to have posters with the word sex on them, where you don't even have a free press.

You've made a conscious decision to call the exhibition London Pictures. What are your thoughts on the city?

George: We think there's an enormous activity in the world throughout now that didn't exist when we were baby artists. It was this small very exclusive, very elite family: one gallery in New York, one in London, one in Paris. Now, they're all over the world, and people travel so much that everything is connected. We took some of the London Pictures to Hong Kong, and within 10 minutes a girl said "I saw you in London eating tomatoes and mashed potatoes in a café." So everything's all mixed up and confused in a wonderful, modern way. Never did so many people go to so many exhibitions; it's extraordinary.

Gilbert: But we are not too interested in the Olympics, we must say that. We don't know anything about sport, and we don't care about sport. But London is certainly a great city; it's one of the most interesting cities in the world. Every person who wants to be somebody in the visual arts wants to be here at the moment, so the power of the young people is enormous.

Do people often recognise you in the streets of Spitalfields, as would they in Kowloon, Hong Kong?

George: Oh people sometimes stop us on the streets, or knock on our door, but it's never intrusive. It's not like if you were a newsreader or a politician. People are very respectful, very kind. We rather like that.

Gilbert: We like that very much because after all we are living sculptures, living and preaching and walking, what do you call, walking the world very slowly.

George: Because we say that when you talk about somebody who died in your family, for example you might say my late aunt, or my late uncle, or my late grandmother. But you would never say the late Charles Dickens or the late Van Gogh, because in some mysterious indefinable way, you feel that those people are still alive in some way for us. If you pick up a book or look at the picture, they're not completely dead and gone. They've left enough behind to give these feelings.

George: Oh, what a very personal question. You see the happiest moment is when the pictures are finished, they are on the gallery wall and it is the evening of the private view. We have a glass of wine in one hand, while surrounded by young people, licking us all over.

Gilbert: That's it. That's happiness for us.

George: What else can we want?

Who are you going to vote for?

George: It's also very exciting in London at the moment because the elections are coming up for the Mayor.

Gilbert: And we love Boris Johnson, our favourite candidate.

George: We used to go to a Korean restaurant in north London, very famous, called the Busan, years ago. We went almost every night, and every other night a young man used to come into the restaurant with his bicycle. People didn't do that in those days. He had very long hair and he would order take away, and we thought "What a crazy young fellow!" Later, we found out that he was the Mayor of London. Our politics are very simple. We prefer individualism to collectivism. And I know both parties have both values but roughly speaking, Boris is for the individual.

Gilbert: We do believe that London is full of energy and full of activity. Every young person here wants to be something, wants to do something. That for us is very exciting.

What do you think of the young artists of today?

George: We are very supportive of young artists. We think every country needs more artists.

Gilbert: Contaminated by art. We want to see the world in front of us completely naked and raw.

George: We can cry and be upset as sculptures, it's very good. A sculpture can do anything.

Gilbert: In fact we feel that every art is a living sculpture, because if you take away the face of the artist, or the name of the artist, you end up like a landscape. The painting wouldn't be so interesting.

I remember you once saying when I first interviewed you that at home, you're not allowed to eat, and that you abide by certain rules. Is that still the case today?

George: We are very, very organised because when we make our pictures we have to be able to be crazy. And you can't be crazy if you're disorganised.

Gilbert: No food at home except champagne when friends come over. That's about it! If not, we never drink alcohol at home, not one glass of wine. Only water and instant coffee.

George: We go shopping every two years, so we don't have to shop on a daily basis. We buy enough lavatory paper, toothpaste, shampoo, soap to last us quite some time.

And lastly, among all the newspapers cuttings that you've collected for this exhibition, was there any particular one that really stood out?

Gilbert: Pooed on it!

George: Pooed on it! Extraordinary!

Gilbert: 'Pooed on it' is a brilliant one, don't you think?