About a year ago, the pharmaceutical company Gilead Sciences debuted a new drug used to treat hepatitis C. The drug was called Sovaldi and, although it was not the first drug released that has cured hepatitis C, it had been shown to be somewhat more effective and have fewer side effects than past treatments.

But what was really exceptional about Sovaldi was its price. In the US Sovaldi sold for about $1,000 a pill, making it the most expensive medication ever sold. Gilead justified the price of their medication in the usual ways: this money can be used to fund future research needed to make better drugs, this medication will prevent people from going into liver failure and needing a new liver, and so on.

So, Gilead was able to sell Sovaldi for a thousand dollars a pill (in the US) making the cost of a standard, 12-week course $84,000. That's a lot of money for a few pills so, as you might expect, this drug has provided a huge windfall for Gilead Sciences.

How much of a windfall?

Before answering that, we should look at how Gilead performed financially prior to last year. Between 2003 and 2013, Gilead grew faster in revenue than any other major pharmaceutical company. Many of the major pharmaceutical companies have had either stagnating or declining revenue in recent years, but not Gilead. In 2003, Gilead was a small player in an industry full of giants, making less than $900 million in total revenue for that year (page 40 of link). By 2013 they had grown more than 12 times in size earning more than $11 billion (page 55).

But in 2014, they really outdid themselves. They more than doubled their revenue in a single year, earning nearly $25 billion. Almost all of that growth was fueled by sales of their new, $1,000 a pill drug Sovaldi.

Growing 122% in a single year is impressive. But what's even more impressive was their profit margin. In 2014 alone, Gilead managed to clear $12.1 billion in pure, after tax profit! That means that nearly 49 cents of every dollar Gilead Sciences took in last year went straight into the pockets of their stockholders. Now Gilead already had a history of making their investors happy. Between 2003 and 2013 their combined after tax profit margin was a healthy 29%, but their 2014 finances blew all that away.

Before we spend too much time celebrating the fortunes of Gilead's investors, we should discuss Gilead's research budget. After all, they say the money they make from their high drug prices goes toward future research and innovation, right?

Between 2003 and 2013, which more than covers the time they took to develop Sovaldi, Gilead did spend a total of $12.4 Billion on research. That was about 20% of their combined revenue for those years. 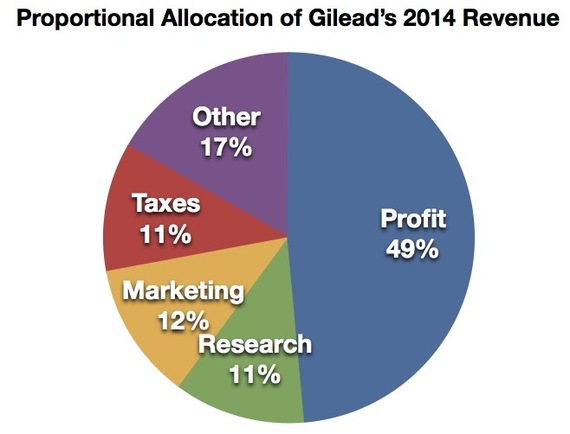 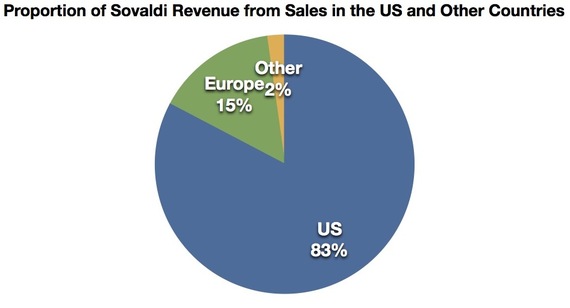 How is this possible? Don't other countries have patients with hepatitis C who would benefit this miracle drug? Of course. They just don't pay a $1000/pill for it. For that matter, they don't pay as much as we do for any brand name drug. You see, back in 2003, our Congress passed a law forbidding the US government from negotiating with the pharmaceutical companies to lower drug prices.

As individuals, we can't exactly bargain with large pharmaceutical companies, because they have a monopoly on each of their products. And in the US, our government won't help us with high drug prices either, because congress passed a law forbidding it. This allows the pharmaceutical companies to charge any price they want for their products with virtually no oversight. No other country in the world has such a law, so the governments of every other country outside the US can bargain with the drug companies for lower prices, and get them.

If you're still not convinced that we in the US are getting suckered, then look at it this way: even if everyone in the US who had taken Sovaldi had gotten it for free, and nothing else changed in Gilead's finances, including the amount they paid in taxes, Gilead would still have made about $3.6 billion in after tax profit--nearly a 21% profit margin. In other words, even when France, Britain and all the other countries negotiate prices, Gilead can still sell drugs in those countries at a very comfortable profit.

Industries have every right to make a profit. But should any industry be allowed unbridled profits by outlawing any possible check on their prices? A market is supposed to have two sides negotiating prices. When we bar the consumers' side from participating in this negotiation we pay $1000 for a pill.