Urban exploring and sustainable art-making are not such strange relations in this new project by Gilf! and BAMN, two of the new socially conscious breed of street artists we continue to see. Known for her various installations of "Gentrification in Progress" tape across homes, businesses and cultural touchstones that are slated for destruction in favor of luxury condos, Gilf! shares this purely sustainable art project she and BAMN did in an abandoned hotel in suburbia recently. They call it "TIXE". 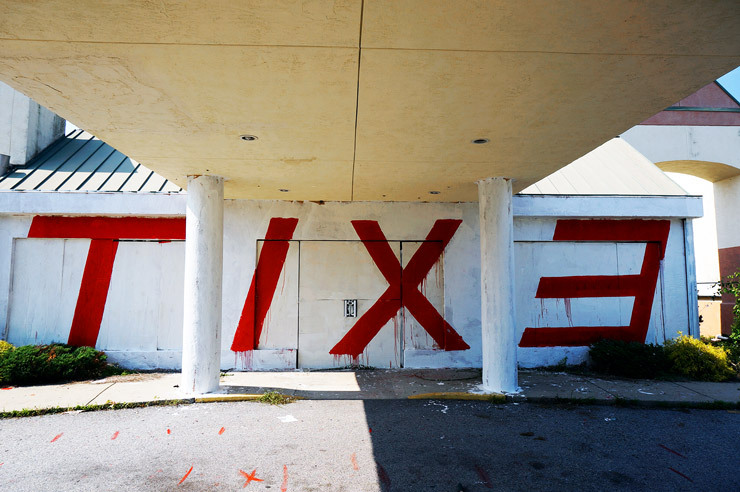 A play on the ubiquitous signs for egress throughout public buildings as well as the abandonment of the building. Gilf! and BAMN 'TIXE" (photo © gilf!)

"We wanted to show how something that has been left for dead actually has so much potential still left in it," says Gilf!, and indeed many of these shots reveal spaces that look perfectly usable -- but she says have been left to rot. As an artist, she assesses and sees a lot of promise, "There is such an opportunity to share beauty, to see beauty differently, to see consumption and waste differently." 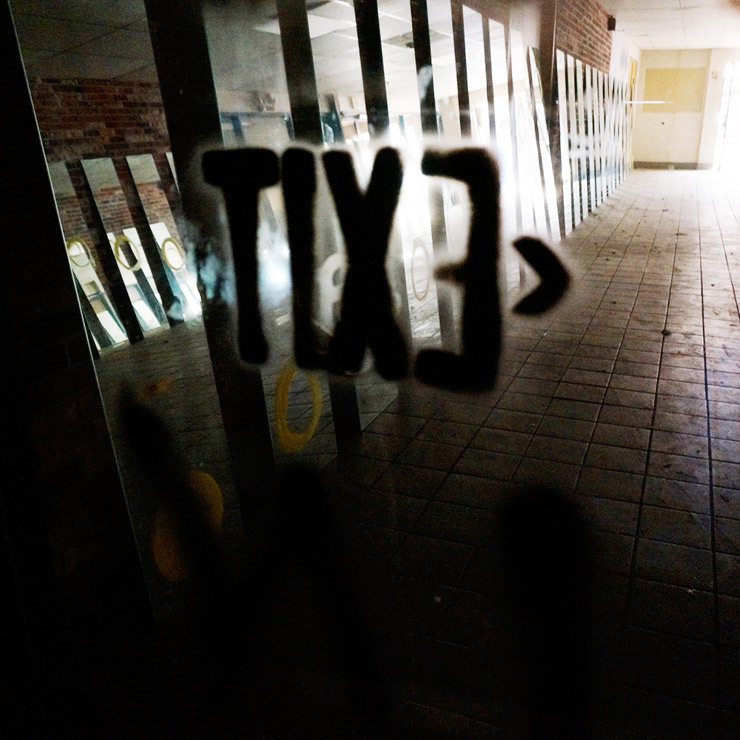 Using only materials that they found on site, both artists created installations that you could easily imagine in a gallery setting, fêted with white wine, hors d'oeuvres and sparkling conversations. Suspended under a skylight above a glistening pool, Gilf!'s gently turning abstract sculpture becomes a beacon of postmodernism with nods to both Duchamp's urinal "Fountain" and El Anatsui's art inspired and drawn from "huge piles of detritus from consumption".

Or, it is simply a cluster of used toilet seats hanging from the ceiling? 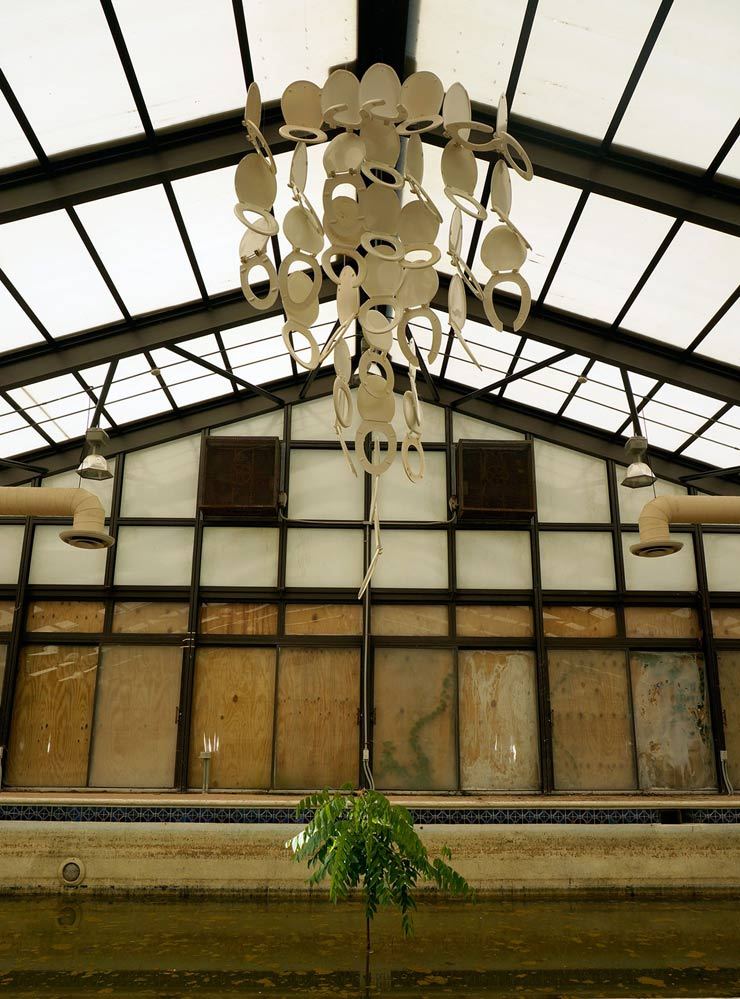 "I've never been more filthy in my life," says Gilf!, "but it was definitely one of the most rewarding projects I've ever completed. I find I am most creative in abandoned, alternative spaces without constraints, expectations, or deadlines. I guess that's not shocking. Freedom is the ultimate facilitator of creativity." 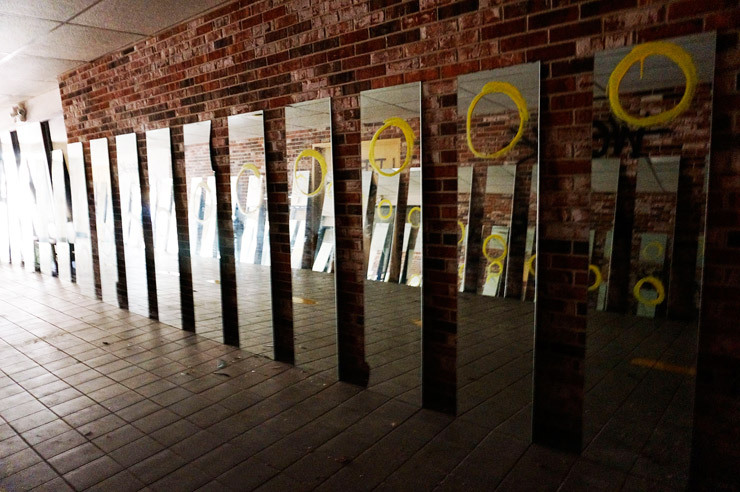 Less easy to see in these images are the installations by BAMN that consist of full length mirrors and medicine cabinets that, when arranged in hallways and courtyards in parallel or constellation formation, serve to draw the light and magnetize it, shooting shards of light across and through a moribund commercially artificial man-made environment. 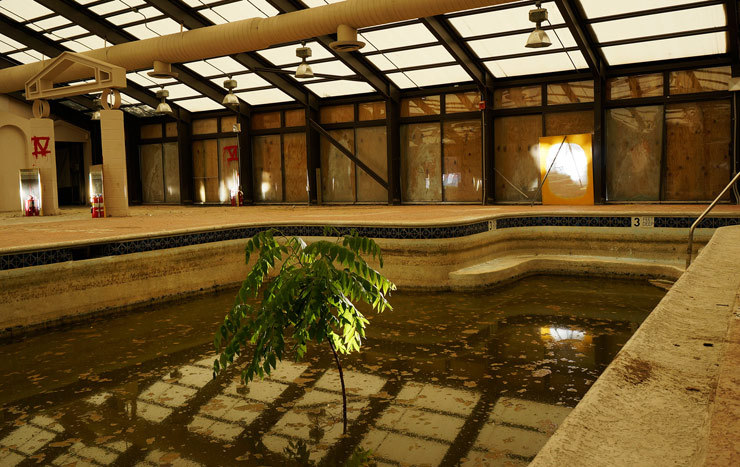 We spoke with both artists and asked them to describe TIXE and what they discovered in the process of discovering, arranging, and installing it. Not surprisingly, both describe their work in the context of larger political and social themes, casting the work as part of a greater activism as much as aesthetics.

What connections did you draw between the waste normally associated with toilet seats and the waste of western society that allows entire buildings to fall into disrepair like this?

Gilf!: When we first came across this shuttered hotel we were amazed at how many useable items were just left there to rot with two brand new chain hotels just down the street. As I've discussed with my previous gentrification work this opportunity really exemplifies the wealth disparity in our country. Two big chain hotels moved in and priced out this small business, unable to compete with such low rates they were forced to shut their doors. The rich get richer -- the small businesses struggle and succumb to our American Ponzi scheme of an economy.

Ultimately the homogenization of our cities and the monopolization of our consumer choices can really be likened to shit. We started out with all this diversity and now through the bowels of our top down economic system everything is pretty nauseating and all looks the same. This system only works for a select few. I hope this project can highlight to my fellow plebeians that we need to start looking at things differently. The opportunity to find value in what we're told is valueless is where our power lies. 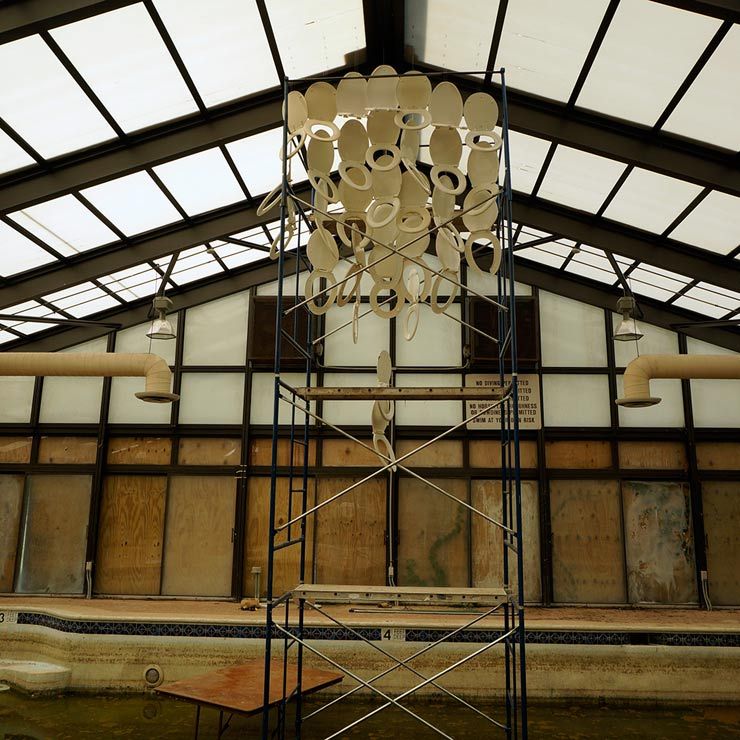 This project is as much about sustainability as it is aesthetics. Can you tell us about the philosophy of using existing waste as material for new art?

Gilf!: The idea of using existing waste as materials for my work is something I've spent the last couple of years really reflecting on. I'm curious about how we can transform items deemed "worthless" by the general population and create inspiration through their newfound meanings. This project is a direct reflection on the involuntary, almost robotic, rhythms of our society's absurd extravagance.

We chose to use the materials we found in the space to shine a light on the ideas around perceived value and wastefulness. What happens when an artist uses items that are deemed worthless and turns them into a gigantic work of art? Are they still worthless if their collective meaning changes? Do the toilet seats now have value because they are "art"? I wanted to show that even the most foul of objects and spaces can be appreciated when reconsidered. 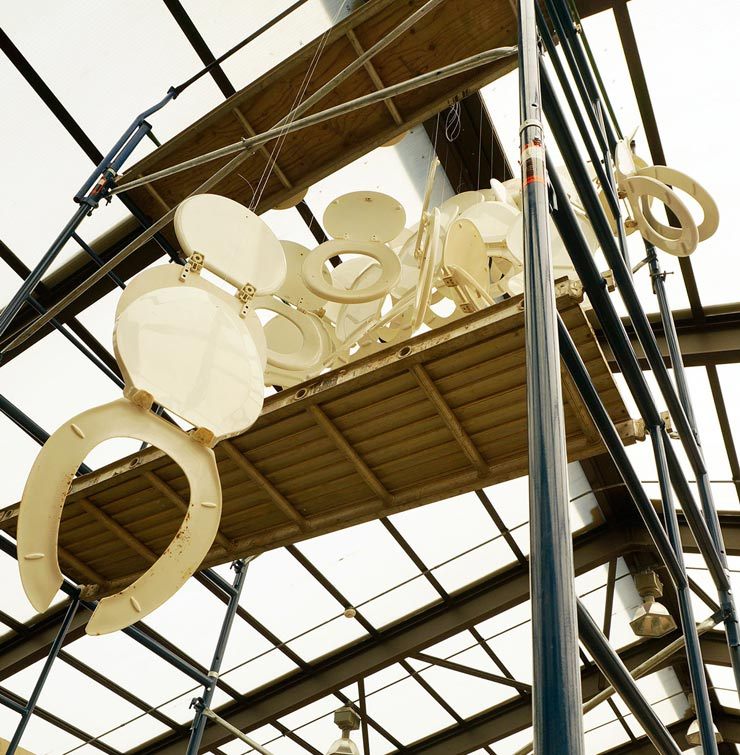 What does a re-capture/re-use art installation tell us about the stuff we throw away?

BAMN: It tells us we got our priority's mixed up. It's all good to be a fun-employed artist running around making stuff, but most of the world is pushing an idea of progress that looks more like suicide. I get it, we're all consumers/zombies, but do we have to be so g-damned wasteful about it? There's gotta be a better way.

Urban exploring can have some pitfalls -- including safety. Do those considerations enter your mind when exploring an abandoned space?

Gilf!: Absolutely. Entering all those hotel rooms by myself one by one was incredibly unnerving. I never knew what I was going to come across. As a woman I have that added layer of vulnerability -- which always infuriates me. But getting over those fears is just part of urban exploration. The freedom I had to create in that space trumped my fear of the bogie man who was only living inside my mind. 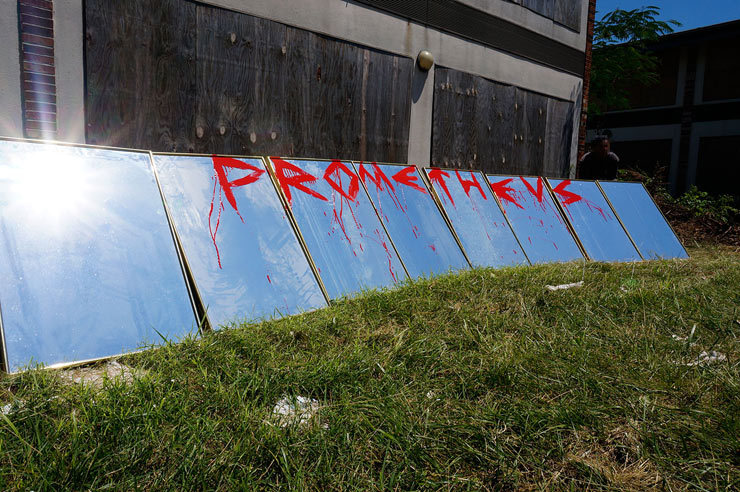 The rows of mirrors echo the colonades in the way you arranged them. Were you thinking of Greek gods when you were creating light ant reflection?

BAMN: I was mostly thinking of Prometheus (because there just aren't enough references to Western culture in art). Anyways, the dude was persecuted by Zeus for restoring fire to humanity. This fire can be a metaphor for truth or light, and there are plenty of people today being persecuted for doing what's best for humanity.

What or who was your inspiration as an artist to do these pieces?

BAMN: I just wanted to be spontaneous going into to this post-modern carcass. So I kept to what was available in the hotel. The first thing I noticed walking in was the darkness. Even during the day this place was totally devoid of life.

About 30 mirrors later I had an installation that bounced sunlight into the hotel, down a bunch of dark hallways, into a rec room where the beam of light ends on a live bush that was planted in the middle of a swimming pool that had a few feet of this stuff that can only be described as toe-jam flavored oatmeal.

The paint was found in a supply closet and all the mirrors were propped up by fire extinguishers... I'm just glad I decided not to do anything with those 200 urine-stained mattresses. 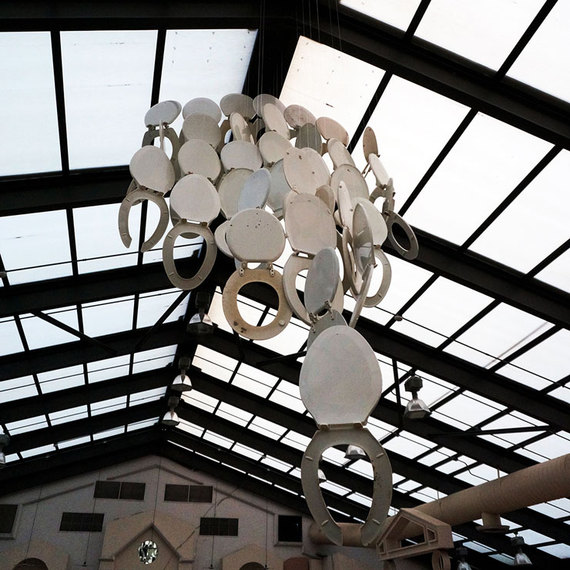 How was the air conditioning?

Gilf!: Let's just say that working 25 feet in the air in a massive room that was more or less a greenhouse was brutal. The scaffolding was built in a cesspool so there was a certain precariousness up there that I'm sure it added to the feeling of sweat-soaked madness. Coupled with handling used, anonymous toilet seats -- it took more than one shower to feel completely clean again. I've never been filthier, or more inspired.

Gilf! will present SHATTERING, the second of a three-part series of participatory actions centering on destruction and transformation, May 7, 2015 in New York. See more BAMN Here