If two French robots hadn't coaxed him out of semi-retirement, Giorgio Moroder would still be practicing his swing somewhere on a Los Angeles golf course. Instead, the 74-year-old Italian composer and record producer, credited with pioneering electronic dance music and crafting space disco hits like Donna Summer's "Hot Stuff," is back on the scene as a DJ.

A few hours before his hugely anticipated headlining appearance at the Pitchfork Music Festival in Chicago on July 18, the Oscar and Grammy winner told The Huffington Post that it's the audience who inspires his energy.

"I just did a gig in France two days ago and it was incredible: 25,000 people doing whatever I wanted to do," Moroder said. "It's an experience. There are not too many people who can have that experience. Maybe the top 20 of the DJs -- and I'm by far not the top 20 -- but the feeling is incredible."

Despite the fact that he composed and produced some of the most popular songs of the past 40 years -- including Donna Summer's "Carry On," Blondie's "Call Me," Kenny Loggins' "Danger Zone" and Irene Cara's "Flashdance... What a Feeling" -- Moroder is genuinely surprised that younger fans recognize his older work.

In the '70s and '80s, Moroder was well known behind the scenes as a producer and composer to artists like Summer, Mick Jagger and Jimmy Page, who came through his Musicland Studios in Munich.

Thanks to the track "Giorgio by Moroder" on Daft Punk's 2013 album, "Random Access Memories," in which Morodor speaks about his life over a swank instrumental, fans nowadays recognize Moroder's voice as much as they do his famously mustachioed face: Moroder said just moments earlier, en route to the Pitchfork festival site, that his driver hadn't seen his face. But when he spoke, the driver immediately asked him, "Are you Giorgio Moroder?"

"Random Access Memories" not only relaunched Moroder's career -- it catapulted Pharrell Williams to a whole new level of stardom and resuscitated the career of producer and musician Nile Rodgers, a veteran of the 1970s disco outfit Chic.

"If the Daft Punk [record] would not have come out, and without DJing, I probably would not do music. First of all, to start a new career, that's not easy," Moroder said. "That album was good for several people, me included."

Moroder was a fan of Daft Punk's 2001 song, "One More Time," but said he hadn't listened to much new music over the past decade. Now, he favors acts like David Guetta, Avicii and other radio-friendly artists -- "like what they play on KISS-FM."

"I love the EDM kind of music, the uptempo songs. The sounds are beautiful," he said, adding, "I just don't know how long it's going to last. It starts to become a little bit repetitive. But other than that, I love it."

Since he became a DJ himself a little more than a year ago, Moroder has fully embraced the digital revolution.

"I love analogue, but digital has so many good sounds and they're getting better and better," he said.

Pitchfork fest fans would tend to agree: Moroder's set went on to be the highlight of the event's opening day, no doubt earning him a few more fans who will snap up his new record, currently in the works.

"I'm preparing an album with all different kinds of artists," Moroder said. "Nothing is ready, but a lot of ideas. It's going to be a nice album."

Giorgio Moroder Is Back, Thanks To Daft Punk
Pitchfork Music Festival 2014 -- Day 1 and 2 Photos 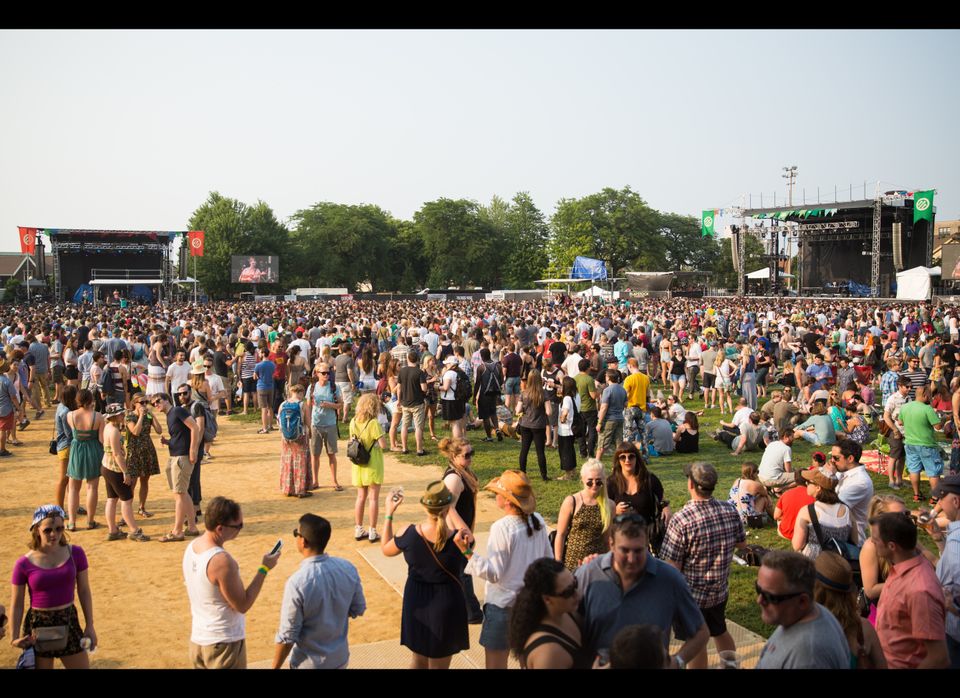