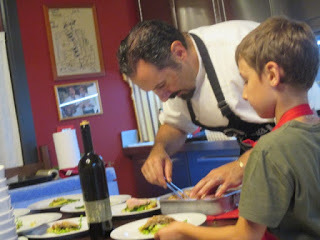 Marco Gubbiotti was the chef of La Bastiglia, a restaurant that earned a Michelin Star. Now he runs Cucinaa in Foligno. Gubbiotti who sports a goatee and wears a uniform made up of a black apron with a white chef's jacket accomplishes a great deal without the usual fireworks that we associate with kitchens. He moves so slowly and thoughtfully around a stove as he multi-tasks, it's as if he were capable of stopping time. As he tends to his carving boards, frying pans and oven, with his young son Lorenzo acting an assistant, he resembles more an artist dabbing at his palette or a scientist studying petri dishes in his lab. He chops garlic and asparagus effortlessly into pure components of matter that look like they should be added to the periodic table. One recent night in the medieval Italian village of Spello, in Umbria, Gubbiotti was preparing the following menu: an appetizer of poached eggs and truffles over a bruchetta composed of sautéed morsels of bread, a pasta called frascarelli, created by adding egg to flour and winnowing the uncongealed flour off in a sifter, cooked pork filet marinated in beer, oranges and herbs and then cooked again, and for dessert, a "sweet minestrone," composed of fresh fruits in custard. Needless to say it's a far cry from the canned Chef Boyardee spaghetti your mother served you when you came home from school. This cuisine is also another country from heavy Italian-American comfort foods like chicken scarpariello, veal parmigiana, sausages and peppers and the the venerable old pizza you order in from Domino's. But America is in the middle of a food revolution and Gubbiotti loves San Francisco. Put two and two together and you may soon see him as one of the celebrity chefs who do the judging on the Food Network's Chopped.