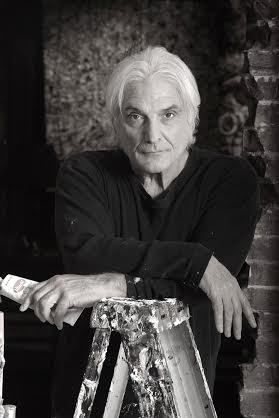 Having been curating my curiosity through interviews with riveting people for more than a decade, I've come to learn that every human being is a unique amalgamation of the people she has met and experiences she has participated in over a lifetime. Each individual is a one of a kind, evolving, canvas that is never quite complete. Who you are today is not entirely who you are tomorrow because every day new people and new experiences become part of your chemistry, altering your canvas. Each of us is art, thus influencers of art. Art is everything, including us.

Today I met a man who is a narrative, an abstract, a landscape, a symbolist, an expressionist, all rolled up in one. He is Giovanni DeCunto. He is larger than life, if you believe that life is purely contained within one's body. He is a Boston based American Expressionist who has gained notoriety around the world as his collections have been featured in museums like the National Portrait Gallery at the Smithsonian, the Museum of Fine Arts in Boston and the George Bush Presidential Library in Houston. You will find his work in US embassies, resort hotels, corporate offices and in the homes of celebrity collectors like Lionel Richie, Tom Cruise and Tony Bennett.

He was born and raised in Lawrence, Massachusetts, and he has known since he was a young boy that his purpose in life is to create art. He recently became the spokesperson for the New Balance Made in America Campaign, because, like their shoes, DeCunto is born and bred in the USA. DeCunto is himself a message that anyone and everyone has the ability to dream, live and create in America.

This is the art of living in 6 simple strokes from the eyes of world renowned artist, Giovanni DeCunto:

Be a Finisher: DeCunto says that most people are great starters, but poor finishers. They start a project, and never finish it. He notes that perhaps history always repeats itself because it's human nature not to finish what we have started. DeCunto says that when it comes to his preferred art, painting, he never doesn't finish. In fact, he says that he won't walk away from a painting, even for a night, unless he has completed it enough so that someone could look at it and know at its essence, what it's all about. He says that his art is always left in a finished state. When I first entered his Boston studio, there were several pieces on the wall in various stages of completion. To me, they appeared completed. DeCunto says that whatever your art is, make sure you are completing it.

Find Your Spiritual Release: DeCunto says that painting, dancing, writing and playing his harmonica or flute, are more than art for him. They are his spiritual release. He says that he wishes more people would seek out their own type of spiritual release, because it makes for a more peaceful humanity. DeCunto says that when you are creating your own art for the world, there is no room for hate or anger because your energy is instead used up creating and releasing the best of yourself to the universe.

The Greatest Challenge: When asked what his greatest challenge has been, Giovanni says that his greatest challenge in life has always been in living up to who he is meant to be. He says that his life is a work in progress, and he's moving closer each day toward the potential that lives within him. He has known since he was seven years old that his purpose here on earth is to make art. He says there have been only a few times in his life when he strayed from his purpose, and during those brief intervals of time, he felt drained of passion. He is categorically afraid of failure and even though he has become world renowned in his craft, his personal realization that he is still so far away from what is possible for him drives him daily. Rather than rest on the heels of his notoriety and success, he instead sees these as sign posts that he is moving closer toward his true potential. To steal a quote from a book he is soon releasing, Lost and Found, "To quench ones thirst is to abort ones life." His success is not a rest stop, but rather a driving force toward a better version of himself.

Be In The Moment: DeCunto listens to music when he's painting. The music he listens to changes with time, just as the culture, innovators and world issues which impact his paintings do as well. I asked him what he thinks about when he's painting and he says that he is completely and totally focused on that one painting when he's working. He says that anytime we are not present within the moment, we are basically saying to ourselves that that moment doesn't matter. "If I were thinking about something else while doing my art, it would mean that my art is not important to me right then. And that never happens. I make myself present in every moment. Every moment counts." 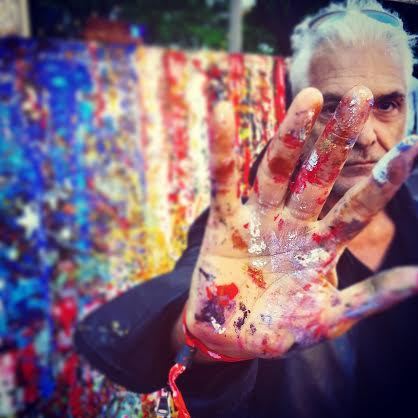 The Rape of Europa: According to DeCunto, the most beautiful painting in the world resides at the Isabella Stewart Gardner Museum. The painting, Europa, depicts Jupiter, the most powerful of the gods, in the form of a white bull, and his love for princess Europa. Jupiter seduces the girl to climb on his back and once she does, the bull makes for the sea carrying the scared Europa from her home. The artist, Titian, is clear that this is a scene of rape. But it is also a scene of ecstasy with a positive outcome. The painting is notable because of its portrayal of paradox, where a state of terror becomes a state of rapture. Even beyond the contradictions that ooze from the masterpiece, there is an even greater message. Europa's rape will give rise to Europe. Minos, the most ancient of European civilizations on the island of Crete is born when Europa's brother searches for her and finds the great ancient city of Thebes. Therefore the painting depicts the birth of civilization.

Having spent time with DeCunto at his North End studio in Boston, I see parallels between The Rape of Europa painting and DeCunto's work. DeCunto says that his art is a compilation of everything that is going on around him; culture, innovators, world issues. His paintings therefore are influenced by everything since the beginning of civilization. He says he has the freedom, in his art, to take molecules of anything and everything in existence and smash them together on the canvas to make something new. He is rearranging pieces of the universe on each canvas. Like The Rape of Europa, each of DeCunto's paintings is a story of humanity and civilization.

Make Sure It's That Good: DeCunto says that his goal in life is to give the absolute best of himself to his art. He lives by a quote from Leonardo da Vinci, "Make sure it's so good it doesn't die with you." He says that he is tenacious when it comes to his work. He doesn't track time when he's painting, he concentrates on creating art that will live forever. Art that lives forever, influences future art. DeCunto says that in his quest to master himself, he has studied every great artist before him. Therefore, there is a bit of DaVinci, Van Gogh, Picasso and thousands of others, in every stroke of every painting he creates. Great art lives forever, and so too does the artist.

To capture the essence of Giovanni DeCunto in a one hour session is akin to having a brief encounter with Michelangelo on the steps of The Sistene Chapel then revealing his biography. Artistic genius takes lifetimes to uncover, expose and understand. Giovanni DeCunto is an unfinished canvas; a beautifully unique story of humanity, civilization and art.