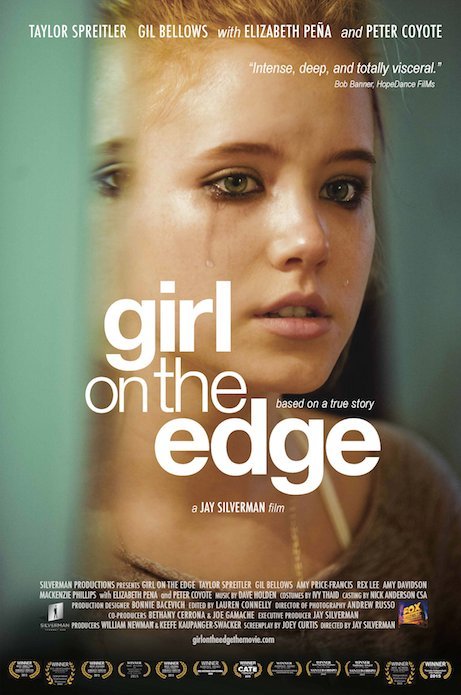 Take a 15-year-old girl and add in divorced parents, an estranged and likely unstable mother, an exploitative 18 year old boyfriend, drugs and sex and what do you have? A sadly far too common story familiar to and lived by countless families across this country.

This time the family was that of Jay Silverman, an accomplished film and TV producer, director and writer, and he has brought his keen skills to this semi-fictionalized movie. Silverman directed and co-wrote Girl On The Edge. His admiration for his traumatized daughter, (second) wife and the clinicians who helped them is palpable, lends pathos and provides hope for others traveling a similar path.

Hannah (Taylor Spreitler) is fifteen and looking for love in all the wrong places. She attaches herself to a self-absorbed eighteen year old, Tommy (well played as a villain by Shane Graham), who soon drugs her at a party. She becomes not just the victim of his sexual assault but a disgrace among her peers as her naked photos wind up on the smart phones of everyone she knows. The clouds of Hannah's life grow even darker and soon she is using drugs, cutting herself and at risk to give it all up to suicide.

Her father, Jake (Gil Bellows), and step-mother (Amy Price-Francis) try and try but the problems prove too intractable and the dangers too great. Collecting other members of the family they organize what is called an "intervention," a moment when the family says we love you too much to allow your life to be destroyed. They take necessary action. In their case, it was arranging for their daughter to be admitted to a rural, residential program for adolescent girls. The fictional ranch in this film is called Maheo and was modeled after the two programs the Silverman's daughter did attend, one in Utah and one in Hawaii. Led by an avuncular Hank (the iconic Peter Coyote) and staffed by psychologists and counselors, including an equine therapist, Maheo becomes the venue for Hannah's passage to a life of safety and trustworthy relationships. The horses, a former shelter horse in particular, mirror each girl's struggle and become an essential medium for their recovery.

The Silvermans are privileged people and did the right thing for their daughter, and that was very hard. But few families will be able to afford a private ranch for months of treatment; others may but only by having to mortgage their home or accrue large debt. However, the Silverman's story need not be for those of financial means alone: what the film illustrates are the necessary elements for any troubled teenager, or adult, to rebuild a life after trauma or with a mental or addictive disorder.

The principles of recovery I have seen work in settings as varied as ranches, wilderness settings, group homes, therapeutic schools and hospitals, day programs, or living with relatives committed to helping them are, I believe, universal. What can work are a dedicated family and friends; a non-stigmatizing community; good treatment (counseling, medications for some, and expressive therapies like music, art, writing, or horses - or some of all of these); perseverance by the person affected and their loved ones - for the course is always marked by ups and downs; repeated exposure to others who are further along in their recovery; the tincture of time; and keeping hope alive - for all concerned, including the professional caregivers. Never give up. And don't go it alone because there are many others experiencing what you are, and who want to help.

Recovery from trauma and mental and addictive disorders is built on trusting relationships, protecting people from their own shame and the shaming of others, and small but clear steps that can be observed and used as anchors and reassurance when the going gets rough. We see that portrayed with care in Girl On The Edge. That's a message so many families need to see, and this film offers them a story to believe in.

Girl On The Edge will Premiere on Showtime April 17th at 11:05pm
For more info, please go to www.girlontheedgethemovie.com

My new book about some essential secrets of psychiatric practice will be available later this year.