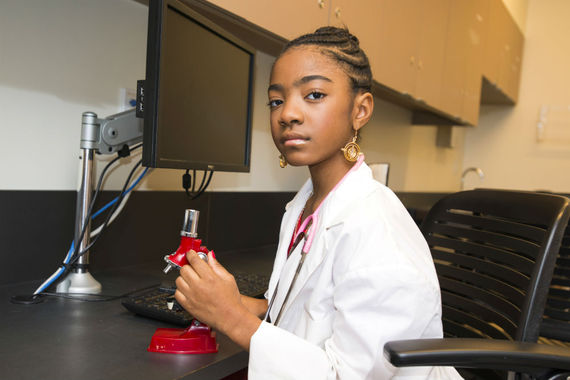 By some accounts there are more than 62 million girls around the world who are not in school -- half are adolescents. The results are too often tragic. As part of the Let Girls Learn initiative, which seeks to increase access to education for girls who are locked out of that future by the customs of their community or the circumstances of their birth, First Lady Michelle Obama recently hosted a screening of CNN’s We Will Rise documentary. This film focuses on the struggle of girls as they fight for their right to education amidst the forces of poverty and societal pressure.

I was inspired to see such a film garner mainstream recognition, as it is in direct alignment with a passion project of my own. Black Women in Medicine is a multimedia project and educational initiative I designed to inspire young women, and particularly young Black women, across the United States to pursue careers in medicine and allied health fields.

In order for our daughters around the world to gain access to careers in science, medicine and engineering, girls and women need to be exposed to many more positive media images that open their eyes to the world of possibility. As Dr. Joycelyn Elders, our nation’s first African-American Surgeon General said, “You can’t be what you can’t see.” The strong media presence of female role models in traditionally male-dominated careers is essential in empowering the next generation of women to achieve their full potential.

The power of media cannot be denied. Film and videos are now ubiquitous and have a tremendous influence on society, both positive and negative. From D.W. Griffith's creation of stereotypes in Birth of a Nation to Leni Riefenstahl's Triumph of the Will, films have arguably been used to covertly and overtly impact the way we see the world, particularly those of other religions or cultures.

Media infiltrates almost every moment of our waking hours and has the utmost influence on the way we view ourselves and others. However, the concentration of media in overwhelmingly white, overwhelmingly male hands, and their reluctance to present more balanced images, continues to be problematic.

Despite the success of talented writers and producers such as Neema Barnette and Ava DuVernay, negative imagery of Black people, and particularly Black women, in media is not contained. The far reach of American culture arguably allows it to inform and influence other cultures around the world.

Imagine how our world would change if instead of reinforcing negative stereotypes through media, it sought to empower. Imagine a day when young Black women will be able to look to the media for inspiration, rather than rejection and discouragement. Imagine what it means to a young Black girl to for the first time watch footage of a Black woman performing open heart surgery and think one day that could be me. This is the sort of media that empowers and can open doors to previously inaccessible career realities.

The mainstream acknowledgement of films that promote positive media and imagery such as We Will Rise and Black Women in Medicine is remarkable. Projects like this alongside other empowering initiatives such as Let Girls Learn and International Day of the Girl give me great hope.

I imagine a day when we will no longer have to fight to ensure the existence of positive media images of women who are breaking ground in their own fields. I imagine a day when girls and women everywhere, regardless of their skin tone, will have access to education and be empowered to reach their full potential. This is why I made the film Black Women in Medicine, and this is why, even though the journey is long and hard, we are making progress.