Coming of age in the 1970s, I was proud to call myself a feminist. Our English teacher gave each of us a subscription to Ms. Magazine. We were going to change the world, shift the paradigm. I married a feminist. We have raised feminist children. Our second daughter studied this year with Susan Faludi at Bowdoin College; we've had remarkable conversations about how the movement encompasses anti-racism and social justice. I want young men and women to rise up, right now, to end the culture of sexual violence that persists on college campuses. I feel angry and tired and frustrated that change, real change, takes a long time to achieve, and that, too often, we diminish an important concept with a lowest common denominator definition.

Now, I am the proud head of an all girls' school, Laurel School, founded in 1896. Girls' schools were established when academic opportunities were rare or denied to girls. Over a century later, American girls' schools are enjoying a renaissance as they encourage girls to grow up as thinkers, leaders, makers, eager to use their talents for good.

I was recently counseled not to allow Laurel to be perceived as "too feminist." The advice was kindly meant, a warning that some fear what feminism connotes. Yet, I continue to think about that offhand comment. What might it mean to be too feminist? As the Head of a school that encourages girls to Dream, Dare, Do; that promotes growth mindset and risk-taking; that knows how girls learn, think and feel; that uses research to inform best practice, I struggle with how not to insist that men and women with the same qualifications be paid equally for the same work. I lead a school that teaches girls to claim their voices, to stand tall, to better the world.

As a metaphor for finding one's voice, the Senior Speech at Laurel is both rite of passage and a long-standing graduation requirement. This March, member of the Class of 2014 Margeaux Biché gave her Senior Speech. Margeaux's speech was clear, important, brilliant. She said:

Even here at Laurel, even in our all-girls environment that pushes us to defy society's patriarchy, we are losing sight of what 21st-century women represent. We represent generations of women before us all around the world who fought and are currently fighting for suffrage, equal rights, equal pay, and, I'm just going to say it, feminism. I know, even for some of my peers, "feminism" is a dirty word... Feminism simply means women's rights on the grounds of gender equality. That's it. No bra-burning, no female superiority, just equality. We know that gender equality is a given here, not a maybe, not a sometimes, not a hope. We know that, within Laurel's walls, we are seen as people, we think of ourselves as people.

... Why do we degrade ourselves when it comes to teenage boys? Why do we so often feel like we need to act dumb? I think a lot of negativity comes from a lack of self-love... We've been taught to be so humble that we often fail to acknowledge that we're pretty fantastic in a lot of ways.

We -- women in particular -- have been told to keep boasting to a minimum, to be modest about our accomplishments... Once a day I tell someone about the paper I have due tomorrow that I have yet to begin, or that, instead of doing my homework, I spent a total of twelve hours watching Netflix over the weekend. We share these details as if we're competing to see who's best at procrastination. Yet, when we get a good grade on a test, when we're feeling particularly attractive, we keep it to ourselves, so as not to seem vain or egotistical.

So I'll say it proudly to you: I love myself. I am my first priority. Learning to love myself has been a long, drawn-out process, and I know I'm not totally there yet. Being comfortable loving myself has made me more comfortable loving others. It's made me more supportive, more understanding, and I think it's something that we need to put much more emphasis on, particularly at all girls' schools.

There is no part of you that isn't worth loving. If a boy doesn't like you because you go to an all girls' school, it's because, deep down... he may be worried you'll challenge the patriarchal world in which he has been taught to be comfortable. If a boy, a girl, anyone ever tells you, they thought girls who go to girls' schools are lesbians, you tell them that their sweeping generalization is incorrect and that, even if true, it wouldn't mean a single thing. If a boy doesn't like you because you're smarter than he is, thank your lucky stars that this is, in fact, the case.

Do not ever make yourself feel less than who you are for anyone.

I'm not going to act differently to get a boy's attention. I've never had a boyfriend, and there currently are no prospects on the horizon. I have yet to meet a boy who is okay with a girl who isn't afraid to be herself. Having or not having a boyfriend says nothing about me... If being a feminist, going to an all girls' school, having amazing, strong, independent women around me have taught me anything, it's to base my self-worth on my ability to hold a conversation, my willingness to ask hard questions of myself, of my peers, in my classes, and my awareness of the world around me.

Be yourself. Every single day. Don't change for anyone, for any reason, unless it's for you. Own what you're proud of.

Wise Margeaux, her call to action a tonic, rich in hope and vigor. Gloria Steinem says, "Women have always been an equal part of the past. We just haven't been a part of history." Margeaux reminds me that the education of girls and women focuses on equity, inclusion, voice, passion. We are so lucky to live in a country where we do not all have to agree. But, we must make a nation and a world in which girls and women are valued and valuable, where they speak up and challenge long-held structures that silence or diminish or oppress. Margeaux, college-bound, knows a lot. May she never un-know it. Her courage and confidence will carry her into the world. We will continue to claim Laurel's place as a crucible in which teaching girls to lead with authenticity and authority is never cause for apology. We are a girls' school -- we believe in girls and women -- in their power and possibility. 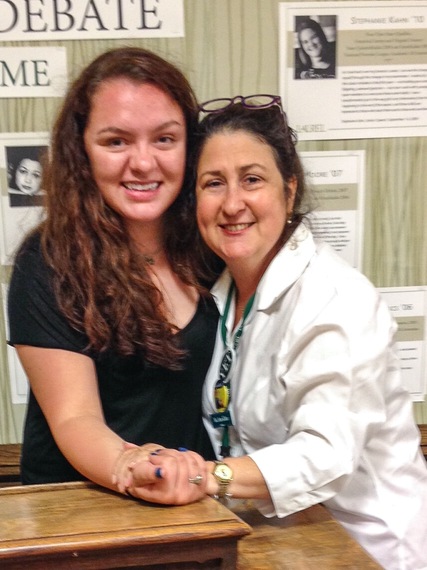