Jannah was just 4 years old when she and her brother were swept from their parents in the massive Indian Ocean tsunami which inundated Southeast Asia on Dec. 26, 2004, killing upwards of 230,000 people across 14 countries.

In the immediate aftermath, Raudhatul's mother, Jamaliah, told Deutsche Presse-Agentur she and her husband searched for their children in their area of Banda Aceh, Indonesia, for a month before giving up hope of finding them alive.

In June of this year, however, Jamaliah's brother encountered a girl in a nearby village who bore a strong resemblance to Jannnah. The Agence France-Press reports that after the tsunami a fisherman had rescued Jannnah from a group of remote islands; she had been living with the fisherman's mother ever since.

On Wednesday, nearly a decade after they were ripped apart, Jannnah (now 14) was finally back in her mother's arms. "My heart beat so fast when I saw her," Jamaliah told Sky News, reflecting on the reunion. "I hugged her and she hugged me back and felt so comfortable in my arms."

"My husband and I are very happy we have found her," Jamaliah told News.com.au in a phone conversation. "This is a miracle from God.”

And the news gets better: Jannnah says her brother, who was 7 at the time of the tsunami, is likely alive as well, since the two were briefly stranded together on a nearby island. The family plans to mount a search for the boy. 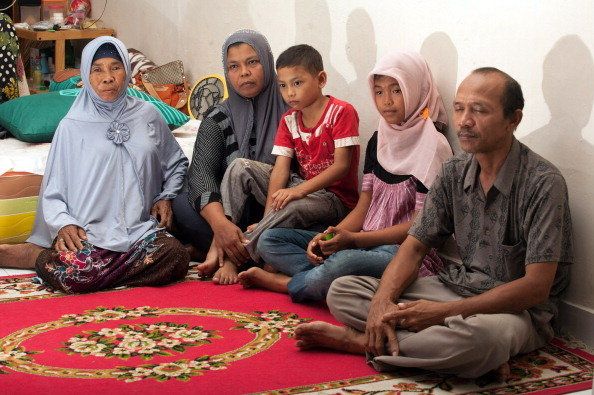 1 / 4
Missing Indonesian tsunami victim Raudhatul Jannah (2nd R), aged 14, sits with mother, Jamaliah (2nd L), holding youngest son, Jumadi Rangkuti (C), and father, Septi Rangkuti (extreme R), joined by Syarwani (L), the foster mother who has raised Jannah in the city of Meulaboh, Aceh province. The Indonesian girl was swept away by the devastating 2004 tsunami and has been reunited with her family a decade after she was given up for dead, her mother said on Aug. 8. Jannah and her 7-year-old brother were carried off when huge waves struck their home in West Aceh district on Dec. 26, 2004.
CHAIDEER MAHYUDDIN/AFP/Getty Image

Girl, Previously Thought Dead, Reunited With Family 10 Years After Indian Ocean Tsunami
13 Awesome Animal-Human Reunions
1 / 13
Dog Rescued After Tsunami
Ban was reunited with her owner in tsunami-ravaged Japan after a news channel aired dramatic footage of her being rescued from the sea. This is pure joy.