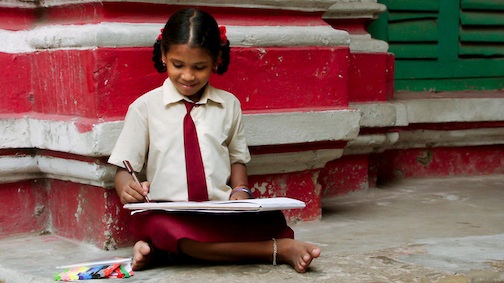 Ruksana lives on the streets of Kolkata, India. Despite this, she excels in school, particularly in mathematics and geography. Photo provided by 10x10 Educate Girls, Change the World, © 2011

What about educating girls simply for the reason of honoring them as human beings?

This has been on my mind since earlier this week I attended a screening of GIRL RISING, an advocacy documentary focused on the power of educating girls. Over 200 of us gathered at the Laemmle Music Hall Theater in Los Angeles - women and girls from ages 7 to 90 (and about a dozen men) -- to support our belief that every girl should have an opportunity to be educated. The evening was co-hosted by GWEN (Global Women's Empowerment Network) and Million Mamas Movement, two outstanding organizations committed to the safety, health and well-being of women and girls.

If you don't know about the film already, it tells the story of nine girls from nine different countries who face major obstacles to getting an education, including child slavery, arranged marriages, sexual violence, poverty and other heartbreaking injustices that are unfortunately so common for girls around the world. However, despite these obstacles, these courageous girls are committed to getting an education. Through their determination, will and strength of spirit, each girl overcomes her obstacles and gets to school. As a result, she inspires change within her community and ultimately, her country.

While I loved the film in many respects (and certainly for its intention), I found myself disappointed that a portion of the film felt like it was perpetuating the same conversation that has been going on in the development community - that if you educate a girl, you will increase your country's GDP - and so this is the best reason to do it.

While I understand that this may be the only way to reach the ears of many who are currently in power, my hope is that we can begin to talk about the best reason for educating girls: because they are human beings.

In my view the intrinsic human goodness and "beingness" of girls is being overlooked in the rationale for educating girls. It seems to be on the sideline, while the economic aspect is center stage. This feels backwards to me. Shouldn't the value of a human life be center stage?

This being said, I understand that the GDP argument makes the issue quantifiable and it's easier to make policy when backed by numbers. Making policy based on human dignity can be more challenging, but that doesn't mean we shouldn't do it.

The more I think about this, the more I see that the denial of girls' education and the overall oppression of women and girls is based on the prevalent religious premise that the ultimate authority and supreme being is a male god.

I think what many people don't realize is that the Goddess, in her beautiful feminine form, was the supreme deity for 25,000 years before the male "God" that we know today. The Goddess was worshipped the world over, as evidenced by archeologists, anthropologists and historians. These were advanced societies with law, government, written language, agriculture and architecture. During this time, women and girls social status was completely different than what we see today. They were the landowners, the food providers, and legal authorities. They were wise, valiant and powerful leaders. They were educated.

The violent invasions of the Indo-Europeans, which started around 4000 B.C., turned this social structure upside down. These were male warriors who brought with them a belief in male deities and a patriarchal system. Their customs and laws were developed in direct response to eliminate Goddess worship. Eventually the Bible was written to codify the "law of the land."

My hope is that we begin to become aware of the historical and political origins of our current default to male authority and understand that life was not always that way. Until we can call God Mother as well as Father, Daughter as well as Son, an unconscious undervaluing of women and girls will continue among both women and men alike.

Isn't it time we remember the Goddess? Then maybe we can remember the intrinsic value of women and girls and we won't have to justify educating girls in the name of economic growth.