Parents with girls take notice: The region where you raise your daughter could have a significant impact on her well-being, according to a new report from the Girl Scout Research Institute.

The report, titled "The State Of Girls: Thriving Or Surviving?," outlines the best and worst states for young females around the country. The report gleaned its results from data on girls' physical health and safety, as well as their economic well-being, education, emotional health and extracurricular or out-of-school activities.

As shown in the map below, taken from the report, states in the Midwest, Northeast and Mid-Atlantic regions are believed to be better for girls. States in the South tended to receive lower rankings. 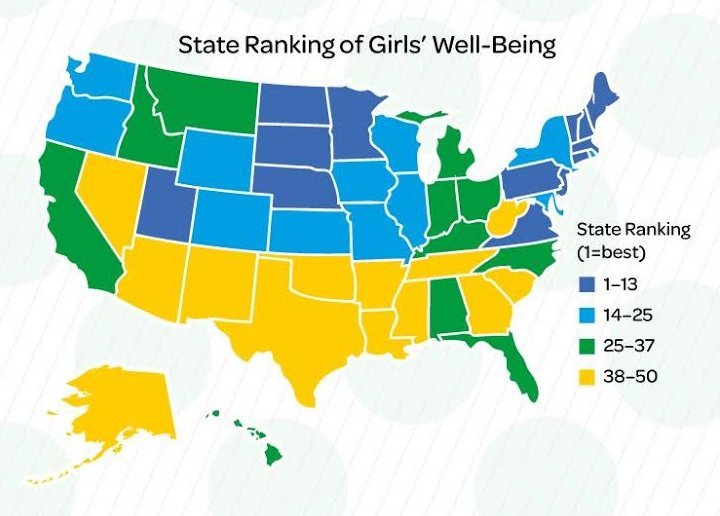 The results are similar to those found in the 2014 KIDS COUNT Data Book from the Annie E. Casey Foundation, which looked at the overall well-being of American children. Indeed, the Girl Scout Research Institute followed a similar methodology as KIDS COUNT.

The KIDS COUNT report found Massachusetts, Vermont and Iowa to be the top states for children. It ranked Arizona, Nevada and New Mexico as the lowest.

Nevada came in last place when ranked by educational outcomes, and was the 49th-ranked state overall. Liz Ortenburger, CEO of Girl Scouts Southern Nevada, said she is not surprised by these results.

"I think there’s no doubt that Nevada was the most, or one of the most, hard-hit states by the recent recession," Ortenburger told HuffPost. "We are all coming out of that in a difficult way ... While this [report] is probably an accurate portrayal, at the grass-roots level I know that I am seeing change -- slowly, but definitely a positive change."

When asked about education in the region, Ortenburger said, "We have a high immigrant population in schools and we do struggle with poverty in southern Nevada ... We’re all concerned about education and about a child simply being enrolled in the classroom all year long. We find people rapidly moving around [our region] because we have so many families living on the fringe economically."

Ortenburger continued, "The idea that you need to be worried if your kid is going to be in the same school has to take the back seat to whether or not you will have food on the table."

Becky Traweek, CEO of the Greater Girl Scouts of Mississippi, told HuffPost that despite Mississippi's low rankings in the new report, "data is not destiny."

"The information in this state level fact sheet from State of Girls illustrates a huge opportunity for the entire United States to advocate on behalf of girls, to encourage more donor support for girls and to encourage more community support for all girls in the country," said Traweek in an email.

Modi told HuffPost that there is not a report on the state of boys in America that she knows of, so she could not expound on the specific disparities in how boys and girls are faring.