Recently, while climbing the stairs on the way to teeth-brushing and "jammies," my son and I played "What's your favorite?". I love this game. It gives me a chance to listen to what my little boy is obsessed with, for me to let him know the reasons my own favorites are favorites, and to connect with him regarding something important to him at the time.

"Which is your favorite Spider-Man?" he asked.

I tried to think what other spider-men even exist beyond the regular one, and came up blank.

"Which is your favorite?" I asked him, hoping for insight and answers.

"My favorite is the blue and red one. After that, the black and red one," he said.

"I want my favorite to be the one that is your favorite, so I choose the blue and red one, too," I replied, thinking that would make him happy and I might learn what's different about the black versus the blue because I was -- and am -- clueless.

"No," my son answered. "Yours has to be the GIRL Spider-Man."

"The girl Spider-Man? I didn't even know there was a girl Spider-Man." I explained that my favorite could be the boy Spider-Man and that girls could like boy superheroes and that boys could like girl superheroes. That all of us are powerful and awesome, whether we're girls or boys. That each of us has superpowers, even when we're just here and being normal. That gender doesn't matter.

He got really upset and collapsed on the stairs while climbing our way to bed. Tears. Big, huge, heart-broken tears, fell down his cheeks. His crying tapered off with an eventual, barely understandable muttering of, "yours is the GIRL Spider-Man," followed by "I don't want to be beautiful."

I told my son that he doesn't have to be beautiful and that my favorite Spider-Man has nothing to do with how handsome he is, and that girls can have cool superpowers, too. He cried, and I felt like a failure. 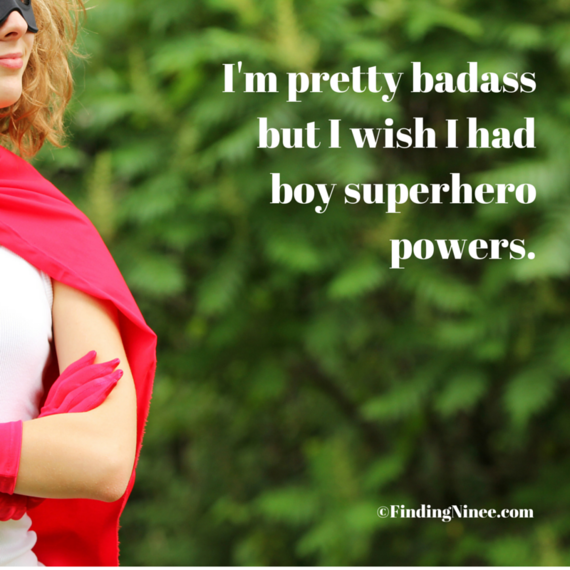 I'm not sure how my favorite Spider-Man not being the girl one relates to my son not wanting to be beautiful, but I'm pretty sure that it's got something to do with the fact that girl superheroes are beyond beautiful, and have really lame powers compared to the boy ones.

Let's take a look at superheroes. I'll start with the classics.

The ultimate superhero is Superman. His powers include flying, superhuman strength, making powerful wind by blowing through his mouth and having x-ray vision and super hearing.

Wonder Woman, his counterpart, is able to deflect bullets with her arm bands and use her lasso, but does not have laser-beam eyes or x-ray vision. She requires her invisible jet to fly, and can't shoot fire or ice from her hands. She's definitely not as powerful or as awesome as Superman. She's a princess.

I asked my son about the best superheroes. The top of his list was Iron Man. Why? He has suits, powered armor and can shoot rays from his hands and shoulders. Also, his helmet shows his/ Tony Starks' face, which means he's a superhero on purpose, and not born one.

There's Hulk, who can smash things and jump very high and can crack the street because of his super-strength. Spider-Man can shoot webs and climb walls and leap from building to building using his webs. Batman defends the world from evil, has the Batmobile, and is strong, fast, smart and has amazing gadgets to defeat The Joker.

I asked my son who the best girl superhero is and his reply was "Invisible Woman," who does not exist in real superhero books as far as I know, but is the one I pretend to be when we play.

Who are the super girls? The sexy-as-hell Black Widow? Wonder Woman, the Princess of The Amazons? Me? His mother? Well, yeah, obviously, but there should be as many superhero girls as there are boys, and their powers should be just as incredible and contain the stuff of boys -- laser beams, fire shooting from their hands, and power suits that enable them to fly.

My son doesn't know who the best girl superhero is because they don't compare, in powers, to the boy ones. Certainly, none that have x-ray vision or super-human strength. WTF Marvel and Disney and superhero makers? And WTF me, who was convinced I was raising a boy who understood that girls and women are powerful and brave?

What are we teaching our children? Why can't the super strength-having mega hero also have boobs and be a mom?

I want to ask superhero creators to give girls and women the cool superpowers. Make her not sexy, or make her sexy, but let her shoot laser beams from her eyes, possess the ability to launch frozen darts or flames from her hands, give her mind-reading, time-freezing skills and a kryptonite that has nothing to do with a boy superhero.

More:
Parenting superheroesParentswonder womanspider-man
Newsletter Sign Up
Raise the kind of person you'd like to know
Subscribe to our parenting newsletter.
Successfully Subscribed!
Realness delivered to your inbox