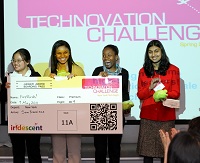 One night in May, the premises of AOL in downtown NYC vibrated with the chatty energy and nerves of 47 teenage girls from 17 local high schools getting ready to pitch their newly created apps to a group of four judges from the worlds of both technology and venture capital. The Technovation Challenge pitch night, the first on the East Coast, was the culmination of a nine week program, matching high school girls with high tech mentors from local industry and universities to create mobile phone app prototypes using Google's App Inventor for Android. The teams met weekly for three hour sessions at Google's New York offices. Early support for the program came from the U.S. Office of Naval Research seeking solutions to a crisis in recruiting sufficient tech savvy professionals.

The winning team created a product called HailNYC to help both passengers and drivers find each other efficiently, so they can both navigate the city at a safer and faster rate. Both drivers and passengers open maps on their apps; passengers request a driver at a specific location which alerts drivers who consult maps with dots indicating locations of waiting passengers. Drivers then notify passengers that they are on the way. One member of the winning team, Sharnice Ottley, a senior at Boys and Girls High School, says the idea occurred to the team when they brainstormed the problems of getting around New York City. While Sharnice "jumped at the chance" to participate in the program, the process "really got our brains churning and showed us how to design our app. I learned, for example, that to make the graphics we had envisioned, we had to do a lot of math. This wasn't the kind of chalk and talk education I am used to; besides creating technology, we had to do marketing research so we could come up with a good business plan." Team mentor Tamar Shinar, a postdoctorate fellow at NYU's Courant Institute, says that what surprised her was her team's deep engagement in a process which was so different from their more passive, routine school work. She observes, "They showed an amazing amount of persistence and patience for three months to get to the end line."

Their victory gave all members of the winning team an Android Tablet, donated by Dell, along with an all-expense-paid trip to San Francisco a week later to participate in the national Technovation Challenge where they placed third, competing against five other wining teams. Technovation Challenge Founder, Anuranjita Tewary, currently a senior data scientist at Linked In, started the program two years ago after spending a weekend with a program called Startup Weekend which paired professionals for an intense weekend of bringing an idea to launch with a prototype. Despite her math and physics degree from MIT and a PhD in applied physics from Stanford, followed by good jobs at Microsoft and Ad Mob, Anu remained a successful scientist who had never considered she could start, or become CEO of, a company. The Startup Weekend, she says, "made me think if I had had this experience early on, my outlook on life would have been as different as I pursued my career." So she left her job to develop the Technovation Program for underprivileged girls around the Bay Area, relying heavily on her network to bring in mentors, instructors and coaches for the girls. "I wanted to show these girls not to use computer science only as a tool, but to learn to program so they can create products that become tools."

Because she had little experience in the nonprofit world, Anu folded her program into Iridescent Learning, a nonprofit educational organization in Los Angeles founded by Tara Chklovski, an aerospace engineer and former school principal. Currently, Iridescent stimulates interest in science, technology, engineering and mathematics (STEM) for about 8,000 underprivileged students and their families with a number of programs, including Summer Engineering Boot Camp, Family Science Program and Science Studios in Los Angeles and New York.

In her opening remarks at Pitch Night NYC, current executive director of Irisdescent, New York, Erika Allison, formerly a Dow engineer who has initiated several engineering programs for high school girls, told the assembled girls and their families that because there is a critical shortage of women in technology, the goal of the Challenge is to inspire girls to see themselves not just as users but as inventors and designers of technology. After the event, Erika admits, "I was completely blown away by all that these 47 girls mastered in just 12 weeks, along with the level of detail in both their apps and their business plans, including market research."

Another New York Technovation mentor, Vanessa Hurst, a database engineer for Paperless Post which provides customized formal invitations online, says since her days as a computer science major at the University of Virginia, she has been aware of the underrepresentation of women in computer science. Working with Technovation to develop an app that allows people to monitor their personal recycling habits, Vanessa was amazed "at how capable the girls were, but then how easily they got caught up in the tango of timidity so that no one wanted to step up, even when she had a great idea because she didn't want to take the credit." Vanessa continues, "Besides teaching the girls technical skills like programming and product design, the Challenge also provided a psychological journey for the girls to believe they can do anything."