October 11 is a day set aside by the United Nations to celebrate girls all around the world, and to mark this year's observance, I'll be taking an exclusive stroll with Melissa Hillebrenner, the Director of Girl Up.

Girl Up is a campaign of the United Nations Foundation that supports millions of adolescent girls growing up in developing countries. Girl Up's vision is that, all girls, no matter their geographical location, have the opportunity to become educated, healthy, safe, counted, and positioned to be the next generation of leaders.

Melissa and I talked about this unique day, Girl Up's vision and the journey so far, as well as the contribution we all can make, in our own little way, to support the cause of the girl child. Here's our conversation;

Ebenezar: Thank you for making out time to be on the stroll, Ms. Melissa.

Ebenezar: So Girl Up is a campaign founded by the United Nations Foundation right? What is the aim of this campaign?

Ebenezar: How much of this vision has been achieved so far since the campaign started?

Melissa: Since its launch in 2010, the Girl Up campaign has funded UN programs that promote the health, safety, education, and leadership of girls in developing countries and built a community of nearly half a million passionate advocates -- including Girl Up Global Advocates Her Majesty Queen Rania Al Abdullah of Jordan and Latin American business leader Angélica Fuentes. Our leaders, representing more than 700 Girl Up Clubs in 44 countries, stand up, speak up, and rise up to support the hardest to reach girls living in places where it is hardest to be a girl. 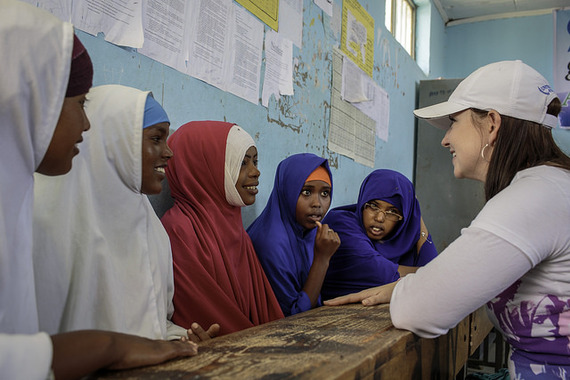 Ebenezar: There are many people who feel there's no reason for girl/women rights organizations to be founded, and this is because, they don't know about the challenges the 21st century girl is facing in different parts of the world. Can you just tell such people about some of these challenges?

Melissa: The reality facing many girls around the world is dire, and the discrimination is often twofold because, they are female and because, they are young. Adolescent girls are often denied their human rights, are often devalued because of existing gender bias, and are seen as unworthy of investment. They face systematic disadvantages across a wide range of indicators, including education, health, nutrition, and participation in the labor force. They have limited opportunities to participate in the formal economy or hold leadership positions. In many areas girls and women cannot vote, cannot own or inherit property, and they do not have the right to stop unwanted sexual advances.

Ebenezar: Wow, really sad stuff. So in what ways can governments around the world act to protect the girl child in their communities and countries?

Melissa: Approximately one person in eight around the world is a girl or young woman aged 10-24. Yet accurate assessments of access to education, poverty levels and overall census activities, are hampered by the lack of official data on women and girls. Without this basic information, it is difficult to assess the need for foreign assistance and domestic social welfare programs.

Many countries do not account for the number of girls in their population due to a lack of ability to count these girls -- to issue birth certificates and other forms of official identification. This means that as a girl grows up it will be difficult, if not impossible, for her to attend school or get a job. She will not be able to own her own land or start her own business. She will not be able to vote. She will likely be confined to the home and left unpaid -- an invisible member of society.

Governments should ensure girls are counted by establishing and expanding their national registration and identification systems, including birth certificates and national identity cards. Doing so will make girls more visible to policymakers and reveal where girls are excluded. Government should also ensure investments in girl programs that focus on adolescent girls as contributors to successful societies.

Ebenezar: Okay, still talking challenges, what are some challenges "Girl Up" is presently facing?

Melissa: There are millions of adolescent girls around the world who face discrimination, are ignored, or are abused simply because they are girls. They are often forced to marry young, drop out of school, and do the majority of household chores and they are deprived of the education, skills, and opportunities they need to earn a living. Our biggest challenge is that the need to serve these girls is bigger than any one organization can handle.

Melissa: Yes. That's why since it was launched in 2010, Girl Up has built partnerships with the United Nations to support programs that give girls in developing countries a chance to go to school, see a doctor, stay safe from violence, and reach their full potential. The UN is one international organization with the reach and vision capable of solving global problems. 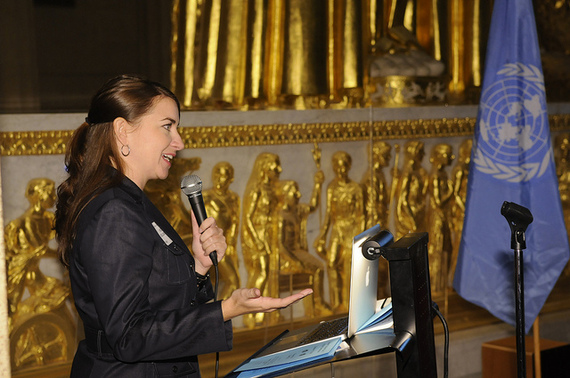 Ebenezar: How can regular people, like me, get involved with the Girl Up Campaign?

Melissa: Every person has the potential to make a difference in the life of a girl. Anyone can advocate, fundraise or be leaders to empower adolescent girls worldwide.

Be a Leader - Take charge to empower yourself, your school, your workplace and your community. Join the Girl Up Community today.

Advocate - Make your voice count and contact your policymakers to affect change.

Ebenezar: In course of strolling around the world, I've been privileged to interact with some awesome girls doing awesome things for themselves and other girls. Malala, Adora, Norina, Sophie, and most recently Zuriel. We seem to see more and more girls stepping out to lead the fight for other girls, do you think we'll see more of this in coming years?

Melissa: Yes, definitely! In just four years since starting the campaign, the number of Girl Up Clubs has grown rapidly to more than 700 in 34 U.S. states and more than 44 countries. In addition, there are more than 400,000 Girl Up supporters actively stepping into the conversation online about adolescent girls. There is so much activity that happens daily, it's easy to see that so many girls are ready to stand up, speak up and take action on behalf of other girls just like them around the world.

Ebenezar: That's really cool. Finally before we go, girls around the world are listening, what will you say to them on this International Day of the Girl child?

Melissa: It's not about what we can say to them, but what they can say to us! In celebration of International Day of the Girl, Girl Up is launching #GIRLHERO, a digital campaign to rally supporters around the world and create a movement that celebrates girls everywhere. To join the campaign, post a photo on social media of a girl who inspires you, and tag her in the post. The girl you tag is then encouraged to pass it forward and post a photo of a different girl who inspires her. By uniting behind one another, we can spark a chain reaction for girls around the world. Go to GirlUp.org/GirlHero today.

Ebenezar: Wow, I sure can't wait to share my #GIRLHERO with the world. Thank you so much once again for your time Ms. Melissa, you're doing a great job and I wish you all the best with Girl Up.