Target just announced that it will remove gender-based signage and labels on toys. That's great. On the other hand, the toys themselves will still look gender-based. My toddler got some pink and purple Lego Duplo blocks as a gift. Around that time, GoldiBlox came out with pink construction toys designed to interest girls in engineering. I thought it was all a bit silly -- the idea that girls needed their own girly color of blocks to pique their interest in the toy. But it did give me pause. There is, of course, a gender gap in science, technology, engineering, and math-related careers -- a divide caused by many factors. The pink blocks made me wonder:

What part do we parents play in that disparity between boys and girls?

Ability isn't the issue. In one study of first-graders, boys started out better than girls at spatial tasks -- the types of skills essential for architects and surgeons. But after eight weeks of practice, the gender gap was gone. Studies of adults show similar results.

These studies point to a few simple things we parents can do to help bridge the gap.

We can remind our children of their strengths before challenging tasks, thus turning stereotype threat to our advantage, researchers say.

We can help our kids practice their spatial skills. Not an engineer, mathematician, or scientist yourself? Me neither. I'm reading Genius," a biography of Nobel Prize-winning physicist Richard Feynman. When Feynman was a boy, his science-minded father would talk to him about worms, waves and inertia in ways I'd never think to. I suppose we teach what we know. For the rest of us, Gwen Dewar at parentingscience.com has compiled a simple list of ways to improve kids' spatial ability.

We can also be enthusiastic participants when our kids build things. Those pink Legos got me thinking about the difference in my attitude toward blocks vs., say, books. I started wondering if my toddler loves reading so much in part because my husband and I are so enthusiastic about it ("Story time! Yay!"). We cuddle up with her and give our full attention; we make time for it every day; she sees us reading on our own.

We weren't setting aside time each day to pull out the Legos. And because playing with blocks was something she could do on her own, I'd often see it as an opportunity for me to do something else.

When the pink and purple Lego blocks arrived at our house, our daughter had been happily playing for some months with the red, blue, yellow and green versions she already had. She didn't show any preference for the new colors. She was just glad to have more blocks, and I was, too. So after giving it some thought, I'm making an effort to get down on the floor with her and build.

I want her to know that I value blocks, too -- whatever their color. 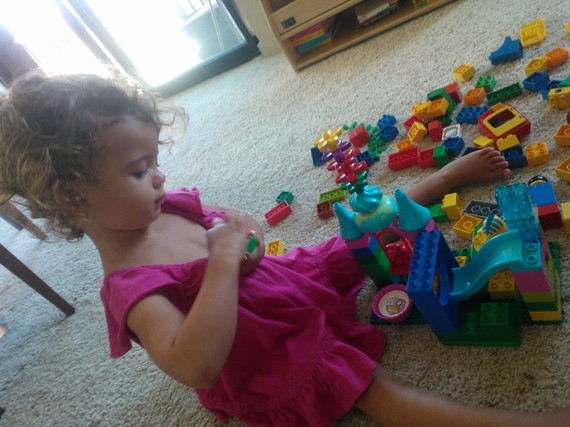 More:
Parenting Parentsgender stereotypesToysLife Lessons
Newsletter Sign Up
Raise the kind of person you'd like to know
Subscribe to our parenting newsletter.
Successfully Subscribed!
Realness delivered to your inbox