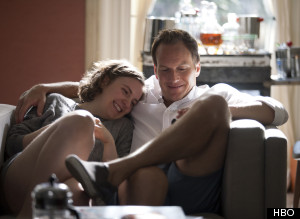 I know I'm late to the party, but I had to say something about this week's "Girls."

On Monday, I gleaned from the Twittersphere that yet another "Girls" kerfuffle had erupted, but I've participated in plenty already and I was so busy I thought I'd just sit this one out. As it happened, I was traveling and under the weather Sunday and Monday, and I couldn't get to the episode until Tuesday night.

Well. So many reactions. But the first thing I want to do is link to Emily Nussbaum's take on the episode, which I think is absolutely terrific. Nussbaum gets to the heart of what made the episode work: The strange intimacy between Hannah and Joshua, which felt both real and dreamlike, and which led to a sex scene that was jarring because it was both truthful and sexy.

Yeah, well, no surprise there. "Girls" is a show that is designed to provoke, but weirdly enough, I don't think this episode was created to freak out large segments of the Internet. This was creator Lena Dunham exploring another stop on a young woman's journey of self-discovery in the big city; nothing about it struck me as odd or particularly unrealistic.

The circumstances weren't usual, but that doesn't make them out of the bounds of possibility. Hannah's had a lot of sex with guys in shitty apartments; this time she had sex with a guy in an nice brownstone. The show had established, long before this episode, that she's voracious for new experiences, so her hanging out with a rich person was bound to happen sooner or later.

Also, people get laid by all kinds of other people all the time. This is news?

What was new about this episode is that it depicted Hannah asserting herself in a different way and a guy finding that attractive. This was Hannah asking for what she wanted and getting it. This was two people both fully engaged by what was happening and enjoying this oddly comforting interlude for all it was worth -- while it lasted, anyway.

Of course it all fell apart -- it had to. This is Hannah we're talking about. I found the final set of scenes particularly powerful; Wilson's performance was pitch-perfect in the scene in which he fell out of like with Hannah. This wasn't the strange, bold girl he could be kind and magnanimous with; this was a needier, sadder person whose baggage he didn't have room for, despite the size of his closets.

And there was a tremendous poignance to the images of Hannah trying out adulthood after he'd left her alone in his perfectly decorated house. She ate his jam and read his paper; she made the bed and looked at his clothes; she experimented with a lifestyle she thought she'd rejected. Most broke artistes and revolutionaries eventually have that realization: High-threadcount sheets and nice food really are pretty great things to have, and passing them by in favor of some elusive ideal can be kind of a drag. It is a lot of work to make yourself think you're above simple pleasures.

Without words, the show conveyed the bittersweet nature of Hannah's post-Joshua realizations, just as that goofball half-naked table-tennis scene conveyed the giddy unreality of the first stages of a new relationship. With great economy, the episode traversed the rise and fall of an intimate bond, without losing sight of Hannah's intrinsic narcissism and the kind of placid remoteness that must have driven away Joshua's wife. It was, as Hanna Rosin wrote, "an Alice Munro story in sitcom form."

None of that struck me as odd; I found it by turns charming, evocative and sad. So those people who found the whole Hannah-Joshua scenario unrealistic ... honestly? They make me laugh, and then I laugh some more.

When I read this idiotic exchange, maybe I was too tired to be angry, or maybe, a season and a half into "Girls," I'm just used to Internet clowns confusedly throwing their poop around. I guess I also feel a little sorry for the authors of that commentary, and others who reacted with similar cheesed-off bafflement. Have they been so brainwashed by mainstream porn and the media conglomerates that control most television networks and movies studios that they can only appreciate a certain kind of body? Have they led such sheltered lives that they think that the handsome jock only wants to date the prom queen?

Oh, that is funny as hell.

If you've lived life at all, you might realize that there are any number of handsome jocks who appreciate all kinds of bodies, male and female. It's kind of saddening, but also hilarious, that so many people have such paltry and pathetic ideas about what's possible in the realms of sex and attraction. I can't escape the feeling that these people never went to any truly awesome parties in their twenties.

What was so obvious in "One Man's Trash" was that Joshua found Hannah attractive because she was ordering him around. Rich, successful and/or hot people are catered to and deferred to all the time. News flash: Sometimes people who get their way a lot find it a turn-on to be bossed around and find it oddly endearing when someone asks impertinent questions. Joshua was bored and lonely and enjoyed encountering the unexpected and the impulsive in the form of Hannah. As James Poniewozik wrote, "She's confident, which is one of the first ingredients listed on the the sexiness package." Yup.

Have so many people truly never been surprised by an intense attraction they'd never have predicted? That's the impression I get from sampling the commentary of those who were vaguely horrified by the episode. The people in the "that would never happen" camp really need to get out more.

But we must clutch our pearls -- yes, we must! -- because Hannah was rude! So many latter-day etiquette mavens could not believe the gall of that young lady. She overshared; she asked for what she wanted; she made a guy beg her to stay; she didn't stay the same frisky chick he'd initially been attracted to; she kind of became a buzzkill. How dare she? How dare she not look like a prostitute on "Game of Thrones" or "House of Lies"? What is wrong with this woman? How dare she exist, much less assert herself or want anything?

What's "wrong" with this woman is that she's an real woman written by real women (i.e., Dunham and fellow executive producer Jenni Konner). Hannah's not a 45-year-old man's idea of what a sexual, ambitious young woman is like. There's only something wrong with Hannah if you start with a set of assumptions about how females on TV should look and act. Hannah's not an ornament or a decoration; she's strange and hard to deal with and oddly innocent about how life really works. She's a piece of work, a pain in the ass and a train wreck you can't look away from, just like the dudes on all those award-winning dramas.

I have to love the hundreds of concern trolls out there, just waiting for episodes of "Girls" to air so that they can eagerly point out everything that's wrong with Hannah. She doesn't look right, she doesn't have sex right, she doesn't have sex with the right people, she's not deferential and polite enough, etc. How noble that so many want to defend the rich doctor from the snares of a broke Brooklyn barista.

Truly, there's nothing wrong with finding fault with the aesthetic and thematic choices of "Girls" (I certainly have from time to time), but, because it's not deferential and conventional, the show is overturning a lot of rocks and exposing some slimy, gross things in our culture. The obtuseness of some members of the anti-"Girls" faction is entertainingly ridiculous, as is their obsession with this person whom they allegedly wish would go away. Why do they so ferociously have to assert all of Hannah's faults and flaws? No chance they could be fighting an unexpected mental or physical attraction to the "wrong" woman, eh?

To those genuinely grappling, as so many of us do, with the strange sediments "Girls" stirs up, I look forward to our continued explorations and Hannah's continuing evolution, which will no doubt continue to cause head-shaking frustration and exhilarating joy. As for the poop-throwers, the concern trolls and the haters, well, I hope "Girls" continues to confuse them. There's no doubt that, despite its fluctuations and inconsistencies, it is an essential corrective to so much of what's predictable and tame about TV (as is its Sunday night partner, the entirely wonderful "Enlightened").

As Emily McCombs wrote in this swell essay, "It's not that Lena Dunham is living in a fantasy world. It's that her critics won't open their eyes to this one."