The four "Girls" (and their boy/friends) are back in town and on our small screens. Hannah is preparing to leave for two years to get her MFA at the University of Iowa's prestigious writers' workshop. She and Adam are still pretty damn adorable -- despite his frustration that his acting career has only landed him a starring role in an antidepressant commercial -- and while they aren't breaking up due to distance, they've decided to plan to have no plan. (Frankly, this seems like like a recipe for relationship disaster.) Marnie is still involved with Desi both sexually and musically, and we are treated to the pair's disastrous performance at a delightfully awkward "jazz brunch." Jessa's lovely relationship with artist Beadie, who she nearly helped commit suicide last season, is cut short by the appearance of Beadie's daughter (played by the amazing Natasha Lyonne). Her relationship with Hannah is on the rocks because Jessa is pissed that Hannah is leaving her behind in New York shortly after lecturing her on staying put. And last but not least, Shosh is finally graduating from NYU, with her bickering, divorced parents (both named Mel Shapiro and played by Ana Gasteyer and Anthony Edwards) by her side. Her entrance to the real world and mission to "get 'er done" begins with apologizing to Ray for pressuring him to get back together with her at the end of last season. The most beautiful part of the premiere comes at the end, when Marnie shows up to see Hannah off to Iowa. The real love story of the series has always been between these two. 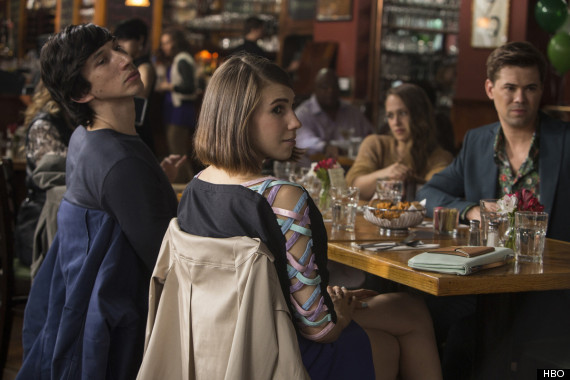 1. Beadie's daughter on millennial entitlement: “Every time I meet someone five or more years younger than me, they are a complete a**hole. Is it because you were told you were special one too many times and you believed it? Because when my generation and every generation before me were called special, we were smart enough to know it meant we were stupid, so it made us work that much harder to stop being stupid.”

2. Hannah on preparing to move: "I don’t usually pack. I usually leave my crap in a pile and hope it makes it to where I’m going.”

3. Jessa on Hannah's choice to leave New York: “You’re pussying out on this whole thing. The thing that we’re all trying to do, which is make it work regardless of location, right where we are.”

4. Shosh on life after college: “I finished my degree. And now I’m just in the world, trying to get ‘er done."

5. Elijah on women in the entertainment industry: “What do Judy Garland and Lady Gaga have in common?” -Elijah “They’re both white?” -Marnie “No, they’re both bad bitches who don’t give a f**k what people think.”