This week we find all of our girls (and guys) at crossroads. Shosh is struggling to find her footing after graduating college and entering the "real world." After another failed job interview, she wanders over to Ray's neighborhood where she finds him screaming at the honking cars that have gathered at the traffic light on his block. They go on a lovely adventure together where Shosh vetoes Ray from buying his underwear and shirts in Queens, and finally apologizes to him for the way their relationship ended, and expresses how much she loved him. He tells her what an impact she had on him. These two have come the farthest since we met them in season 1 and it was lovely to see Shosh offer Ray her "true and unyielding" friendship.

Marnie and Hannah both make major decisions this week, facing the imperfections of what they thought they wanted. Marnie shares her demo with Shosh and Jessa and receives some lackluster feedback. Things are also still pretty tense between her and Desi, until Desi shows up at her apartment in the middle of the night sobbing about how he told his girlfriend about them and broke up with her. It soon comes out that he only preemptively broke up with Clementine because she was going to dump him. Just when we think Marnie might have the courage to tell Desi to buzz off because he's kind of a shitty person, she gives in to him as he says "Oh my god, I love you, I love only you.” Marnie gets what she thought she wanted... but it feels tainted.

After writing a horribly passive-aggressive "apology" letter to her classmates and facing their high-falootin' wrath, Hannah comes to the conclusion that Iowa isn't actually what she wants. With a little love and reassurance from her father (we will always adore Peter Scolari in this role), Hannah hightails it out of Iowa -- woo hoo the ladies are back together in the city! -- and back to her old apartment. But apparently she didn't give Adam a heads up about her return, because his new girlfriend (Gillian Jacobs) opens the door. Crap. 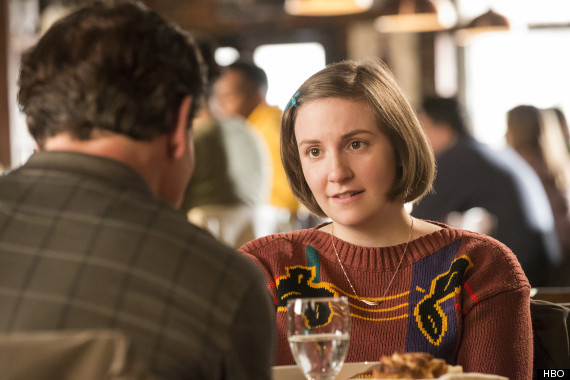 1. Shosh on Chelsea Clinton's role model status: “She’s always been one of my heroes, because she is such a strong woman struggling so nobly with her very curly hair.”

2. Hannah on her classmates' criticism: “I think that takes us down a dangerous road, workshopping each other’s emotions.”

3. Life advice from Hannah's dad: "All I’m saying is that sometimes the stupidest f**kin’ decision in the world is the right decision for you."

4. Shosh on love: “People always talk about how love is like the strongest emotion. But I was scared, and sometimes that’s even stronger."

5. Shosh on friendship: “Friends do not let other friends buy underwear in Forest Hills.”