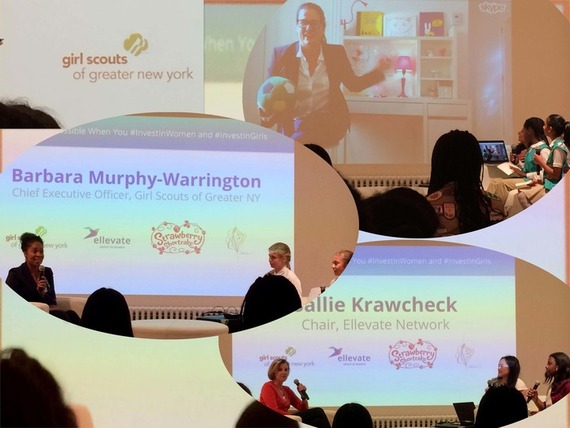 I consider myself relatively social media savvy. I am well aware that one of the keys to using social media successfully is not just posting, reading, sharing, and liking, but truly interacting. I still found that aspect challenging, however. Genuinely interacting with others in groups on LinkedIn had not come naturally to me, until last weekend.

On Saturday, a member of the LinkedIn group "Network of Executive Women" started a discussion by saying, "I'm senior brand manager at Girl Scouts and was wondering if any of you were ever a Girl Scout? Feel free to respond!" For the first time I was inspired to chime in on LinkedIn and answered, "Of course!" Brief to be sure, but it conveyed my attitude that most successful women were indeed once Girl Scouts. I was also stirred enough to look up the individual asking the question and send her a request to connect. She immediately accepted and then replied with the following: "If you don't mind, I have a question I was hoping you could answer: What might a world without the Girl Scouts look like? Or, how might you or your life be different if you had never experienced the Girl Scouts?"

What a big question: "What might a world without the Girl Scouts look like?" I don't think that many people could point to the Girl Scouts and definitively determine that the experience was the cause of their success, but I am sure that many women who were Girl Scouts would say that belonging to the organization positively impacted their lives. For me, that meant wanting the same experience for my daughter and volunteering to be one of her troop leaders in spite of my demanding career.

As a result, in 2012 I had the opportunity to take our troop, including my daughter, to the 100th Anniversary of the Girl Scouts in Washington, D.C. For one day, 250,000 Girl Scouts came together on the National Mall and sang songs, traded SWAPS (Special Whatchamacallits Affectionately Pinned Somewhere), bonded, and enjoyed the day. As a child growing up in the western United States, I never imagined that I would be there. Celebrating the 100th Anniversary of the Girl Scouts was a moving day and an event I will never forget. Most women I speak to about the Girl Scouts have equally fond memories. Whether a scout for a year, five years, or for life, the mention of the organization is bound to elicit a smile.

One thing I love about the Girl Scouts is that it is non-partisan and yet at the same time patriotic. It has taught women to be leaders while also allowing them to have their own convictions and beliefs. The Girl Scouts is a place where generations of future leaders can just be girls. Consider this powerful list of famous Girl Scouts:

What would a world without these Girl Scouts -- or any Girl Scouts -- look like? The women listed above may not have had a place where they could learn to be leaders. They may never have had the opportunity to be in an environment that was not male-dominated. But these women did have a safe, supportive, encouraging organization where they could express themselves and their ideas.

Clearly the Girl Scouts has a lot to offer every girl. I was moved when I was at the Anything is Possible event earlier this month presented by Ellevate, Strawberry Shortcake, and L'Oreal USA. The emcee, COO of Ellevate Kristy Wallace, got teary-eyed when introducing the president of the Greater New York City Girl Scouts. She started her introduction by stating how much the Girl Scouts meant to her and how honored she was to make the announcement. It was a feeling with which I completely related.

When I look at the Girl Scout Law today it continues to inspire me: "I will do my best to be honest and fair, friendly and helpful, considerate and caring, courageous and strong, and responsible for what I say and do, and to respect myself and others, respect authority, use resources wisely, make the world a better place, and be a sister to every Girl Scout."

Wouldn't the world be a great place if all of our business, government, and entertainment leaders lived by the Girl Scout Law?

--
Elin Cherry is Principal and Head of Capital Markets Practice at Compliance Risk Concepts ("CRC"). Previously Elin was Director and Head of Business Unit Compliance, for CIT Group Inc. Prior to CIT Elin was at Societe Generale, where she served as Managing Director, Head of Global Markets Compliance and Deputy Director to the Chief Compliance Officer. @elincherry