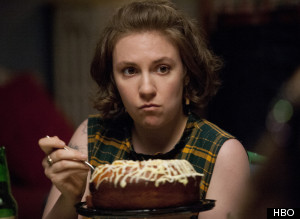 Note: Do not read on if you are not yet up-to-date on Season 2 of HBO's "Girls."

I wrote my most recent review of "Girls" after watching the first four episodes of the HBO show's second season, but writing a review before the season begins airing is often constraining. You can't be too specific in those kinds of critiques for fear of revealing too much about plot, story and character details that the audience might like to experience for themselves.

So now that we're nearly halfway through the season, here are a few specific thoughts about Episode 3 and Episode 4 of "Girls."

All right, let me start with my first and biggest objection to Episode 3, which contained some of my least favorite "Girls" moments ever. In that installment, Marnie (Allison Williams) was locked in a box by Booth Jonathan (Jorma Taccone) and the show treated that as not a big deal, kind of amusing, proof that Booth is an eccentric weirdo, proof that he's a good artist and something that will make for a funny anecdote down the road.

What? He locked her in a space that she didn't really want to be in, ostentatiously ignored her and seemed to enjoy the power that gave him over her and that's supposed to be vaguely amusing? I didn't find it so. At all. (And judging by the slide show below, I'm not the only one.)

When discussing "Girls," it's incredibly easy to fall down the rabbit hole of trying to make a distinction between what the show depicts and what it endorses. The show depicts a lot of unpleasant behavior and I know we're supposed to understand that the show isn't saying this is how people should behave, it's just how some entitled people do behave.

But isn't "Girls" tacitly endorsing Booth's behavior, which to me verges on sociopathic, by showing how well it worked out for him? Here's how things went for Booth: He took Marnie home, locked her in a space she couldn't get out of, forced her to experience his art, and then, his reward for all that was having sex with Marnie. Maybe she laughed at him after the weird doll sex (which looked like the worst sex ever), but she stuck around. When texting Hannah, she seemed pleased to be there. And in Episode 4, she tells her ex Charlie that she's "seeing" Booth.

Apparently, absolutely no part of Booth's behavior put her off. Everything he did seemed to have worked out pretty well for him. So isn't "Girls" more or less endorsing the behavior of the guy who trapped a woman in a cage because it amused him?

Regardless of whether the show is on board with his behavior, Marnie's reactions didn't make much sense to me. Frankly, how things developed between her and Booth came off as an enormous convenience that was about creating certain situations, not remaining true to who those people are.

We've known since Season 1 that Marnie's attracted to him and I completely understand being attracted to someone you know is an asshole. Most of us have been there. But when she runs into him at the club, she has his number: He's a manipulative, creepy art-world con man and she more or less tells him that. Marnie is still growing up and figuring herself out, but she's not a dummy. Until the show decides she is, I guess.

I assumed that Marnie would come out of Booth's art-box (which came off as a horribly derivative, bargain-basement appropriation of Bill Viola's wonderful work) and do two things: Tell him his art was awful, and yell at him about locking her up. Nope: She told him the art was great and she didn't even mention his ostentatiously dickish behavior (besides a few "What the fuck's?" which could be interpreted as "What the fuck, you're a great artist!"). Even if I buy that she liked the art, I don't buy that it transformed her so much that she'd suddenly be unable to call him on his behavior.

I think "Girls" is trying to do a riff on a storyline we've seen on TV before -- the successful woman whose life runs off the rails who then dates a string of jackasses. It's not pulling that off with her, not unless you believe a few setbacks would make Marnie an entirely different person.

Lena Dunham, as a writer and director, is pretty great when it comes to the smaller stuff: The frantic cartoon playing in the background when she goes to Laird's apartment; the way she told him "no more crying" (from offscreen) in the drugstore; Elijah's reaction to her kiss ("When did you eat jerky?"); Marnie's quietly cutting line to Charlie's new girlfriend ("So where do you get your headbands?"). When it comes to stealthy and telling observations, "Girls" rarely misses a step. It's both juicy and compassionate in those small moments; those are the observations of an eye and a heart that miss nothing.

When the show goes big, it sometimes flails, and it sometimes makes one of the oldest TV mistakes in the book: Sacrificing character to a short-term plot requirement or joke. Other times, Dunham's craft just isn't quite up to the level of her ambition.

For instance, Hannah's big "you're a bad friend" speech at the end of Episode 3 didn't really work for me for a number of reasons. For one thing, it wasn't fair (by contrast, Thomas-John and Jessa's fight in the following episode worked like gangbusters because they're both right).

Sure, Marnie messed up by not telling Hannah about her and Elijah, but Hannah is so relentlessly narcissistic (She's a great dancer! She has several great folk albums in her! She's a great writer!) that her calling someone else out on their selfishness is the height of hypocrisy. Maybe that's what I'm supposed to think, but is the point of the show to make me like Hannah less every week? I sure hope not. The fact is (and I think Kareem-Abdul Jabbar is with me on this), her relentless lack of self-awareness can be tiresome and exhausting in the aggregate, even if it's amusing on occasion.

And if I'm being honest, Dunham's performance in that scene just didn't feel truthful or real to me. It felt like she was trying to act, but her side of the big confrontation felt flat, stiff and forced. I get that a lot of the third episode was about how two partners in selfishness, Elijah and Hannah, ended up being terrible for each other, but ultimately, the episode went as off the rails as their coke bender did. Strong flavors -- Booth's ultra-douchiness, Hannah's grandiose anger -- can stretch the show's fabric in ways that just don't quite work.

Thank goodness the fourth episode came along and did almost everything right. Three different scenes -- all of them subtle and full of sly wit -- were among the best things "Girls" has ever done. Thomas-John and Jessa's fight may well be one of the funniest and truest things I'll see all year.

First, the Ray-Shoshonna scene was both sincere and adorable. At this point, I find Shosh (Zosia Mamet) to be the antidote to a lot of the other characters' self-deluding behavior. There's no agenda with Shosh. There's no self-aggrandizing. She's just exuberantly, nervously herself (I could listen to her answer the phone all day: "Denise? Hi, it's Shosh. How are you? I'm amazing." She is amazing.)

It cost Ray a lot to admit that when not living with Shosh, he was living in his car, and it took Shosh a while to figure out that he wasn't disappointed in her -- he was terrified that someone as wonderful as her would want to leave him. The realizations these characters came to were quietly and brilliantly handled; Alex Karpovsky's performance was shot through with self-knowledge and fear, and all we got from Shosh was the stunned look on her face when Ray told her he loved her. Both of them were outside their comfort zones, but in ways that were full of possibility and joy.

The quiet antagonism of Thomas-John's mother at dinner -- and Jessa's increasingly aggressive responses -- were all brilliantly handled in my second-favorite scene. Thomas-John's dad was clearly smitten with Jessa's rebel vibe (as his son had been months earlier), and Thomas-John had his hands full trying to keep his mother calm and his dad in check. If there's one thing "Girls" has done consistently well, it's casting; Griffin Dunne and Deborah Rush knew exactly how to handle this scene. Thomas-John's parents weren't unreasonable, but neither was Jessa's anger at being both judged and lusted after. (And if I ever had any doubts about Jemima Kirke as an actress, this episode laid them to rest.)

The disastrous dinner led to a delicious fight, one that had been coming a long time and was full of much-deserved insults on both sides. His apartment does look like "the set of gay 'Entourage,'" and Jessa is a directionless freeloader in perpetual flight from anything involving sustained effort. As much as I loved their sneering, accurate break-up ("That was my Humie!"), I mourn the loss of Thomas-John from the show. I hope they find a way to bring Chris O'Dowd back into the mix because he created a terrific character sketch of a nerd who'd morphed into a rich yuppie without stopping off to mature at any point along the way.

And that's really what "Girls" is about -- people who haven't fully gotten their shit together, confronting friends and acquaintances about the disarray in their lives. When it works, there's a freshness and intelligence about it that is a joy to behold. When it works, there's a vulnerability to it that is as disarming as Ray's desire to wash a pig with Shoshanna or Jessa's tears in the bath. Even Hannah can be winning in her stupidity: She throws a dinner party and then literally takes the cake and doesn't share it with anyone else ("Please continue to have a ball!" she insisted as the entire affair went south.)

"Louie" and "Enlightened," two masterful shows about characters who have a hard time learning from their mistakes, display enormous control when it comes to creating tones, characters, situations and moods. "Girls" isn't there yet, but the fact that it can provoke such passionate responses is, in itself, a sign of how much I've already invested in this world.

When the show doesn't work, I remind myself that Lena Dunham is only 26 years old. It can be frustrating to be a fan of "Girls," just as it can be hard to be Hannah's friend. But there's no chance I'd give up on any of this, because one of these days, Hannah might actually come through with that amazing folk album.