Here at HuffPost Women, one of the things we love most about Lena Dunham's HBO show, "Girls," is the incisive, witty and hilarious dialogue that Dunham and the rest of her writing team come up with every week. So instead of simply recapping Season 3, we decided to pick five quotable gems from each episode.

Any emotional capital Hannah earned at the end of last week's episode was pretty much obliterated this week. In perhaps our favorite cameo so far, Jennifer Westfeldt plays the grieving wife of Hannah's presumed-gay (and definitely deceased) editor, David. His widow accidentally reveals to Hannah that her book probably won't come out. "My book is dead?" she exclaims -- yes, at a funeral. Meanwhile, Ray's invective-turned-seduction leads to an awkward, tabletop hook-up with Marnie. Another publisher offers to print Hannah's memoir in a hilarious exchange between a high-powered female publisher and her hapless assistant. But what would our favorite millennial Bildungsroman be without a few legal roadblocks? Misdirecting her anger over a potential three-year delay in her literary aspirations, Hannah ends up kicking Adam's sister out of their apartment. 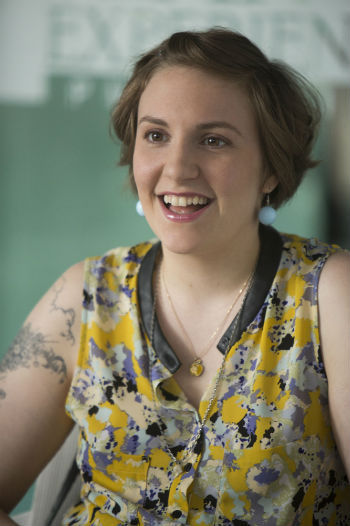 1. A newly-widowed Jennifer Westfeldt on her late husband's reputation: "A lot of people think he was gay. And you know, he was sometimes."

2. Hannah's philosophy on conflict resolution: "I have watched enough 'Dr. Phil' and 'Intervention' to know you can work anything out, if you just talk about it."

3. Shosh schooling Jessa on adulthood: "If you're serious about improving yourself. You need to do more than just smoke Dorff-cigarettes. You need to grocery shop and condition your hair, even though it does so well with natural oils."

4. Hannah on her personal brand: "Well I'm from the Midwest, so I will always be 15 to 45 pounds overweight depending on how far I live from the coast. [The] further I am from the coast, the fatter I am."

5. Ray on Marnie's millennial ambivalence: "You come across like you're better than everyone, and you want no part of their lives, and then when you're excluded from things you're outrageously offended and hold a grudge."