This post is part of the Global Moms Relay. Every time you share this post, Johnson & Johnson will donate $1 (per action) to help improve the health and well-being of moms and kids worldwide through MAMA, Shot@Life, and Girl Up. Scroll to the bottom to find out more.

"It" was a drawing of a young girl by a 14-year-old student called Maryam. And it was part of a larger collection of drawings and poems given to me by Maha, the principal of a girls' school in Amman, when we celebrated International Women's Day a few weeks ago. 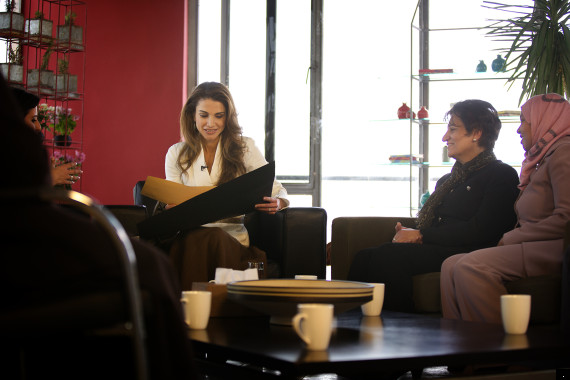 Why did that drawing resonate with me?

Because girls with dreams become women with vision.

Confident women who participate in their communities and countries. Strong women who contribute to their nations' growth and prosperity. Compassionate women who, as mothers or guardians or leaders, nurture and guide the next generation -- boys as well as girls -- towards greater equality, justice and prosperity.

As part of that celebration, I had the privilege of sitting down with one such group of women.

What unites these women is not motherhood -- some are not mothers. And you won't read about them in Forbes or the Financial Times. Neither are they CEOs, lawyers, financiers or doctors -- careers that many see as traditional markers of success.

What unites them is their strength, resilience and resourcefulness. They're all role models. They are blazing trails. I couldn't be prouder of them. So, the "baton" that I pass to all of you is their stories, their example.

Being school principal isn't a job for Maha. It's her calling. As she spoke about nurturing a love of learning in her girls and instilling in them the belief that they can be anything they want if they work hard, she did so with no less passion or determination than when I speak to my own teenage daughters, Iman and Salma.

But Maha isn't a mother -- not in the conventional sense.

She told us, "I've been married for 26 years. My husband and I were never blessed with children. But I bet you I hear the word "Mama" more often every day than all of you who have given birth. Each one of those girls is my daughter."

Her students are fortunate. But their mothers are also fortunate. How often is your daughter taught by a woman whose instincts and ambitions for her reflect your own?

Shifa is another remarkable woman. Shifa and her husband both worked hard but with four children, it was a struggle. With a high school education each, they were determined to provide a better life for their children.

Shifa sold her wedding ring, did odd jobs and took a loan to open a small supermarket -- unprecedented for a woman in her village -- to raise funds so that her husband could go to university. Today, Shifa also attends university -- part-time so that she can care for her children.

Shifa's choices were as unconventional as they were controversial. She knew that some in her community would disapprove. But, each day, with the support of her husband, Shifa's example to her sons and daughters, family, friends and neighbours is changing her community. They're beginning to understand that a woman can be educated, enjoy a career, support her husband and be a great mother.

There were so many stories of courageous women who, despite facing resistance, persevere to give girls across Jordan hope and opportunities. Like Fayzeh, who strives to help girls with disabilities find jobs. It hasn't been easy. At times, it's been intimidating. But, with every success story, attitudes are changing. And it's thanks to women like these. Women with vision. And men with vision. Because each one of the women who told a story praised their husbands for supporting them.

So, apologies to the Global Moms Relay. It's impossible to reflect on an individual mom who's changed my world. But I can reflect on countless women who are transforming Jordan into a more prosperous, equitable and cohesive nation. Because whether you give birth to four children or mentor 400 or inspire 4,000, for me, motherhood is a metaphor.

It's about the power of your example to nurture a new generation. It's about creating positive change and enabling opportunity. It's about learning from failure and being brave enough to break the mold. And it's about building foundations under the dreams of young girls, like Mariam, so that they will pay it forward for tomorrow's dreamers.

Of course, stories of girls and women fighting for equal opportunities are not unique to my region. They're universal. That's why in 2000, the United Nations devoted one of eight Millennium Development Goals to gender equality and female empowerment.

As we approach the 2015 deadline, there's much progress of which the world can be proud: more girls in classrooms; more mothers surviving childbirth. But poverty still has a woman's face. Violence is still a burden too many women endure. Prejudice still holds too many women back.

That's why, last year, I was honored to be part of the panel which participated in the next set of global goals -- the Post-2015 Development Agenda -- so that, this time, we can truly advance women's and girls' rights. That means seeking out and supporting the most impoverished, setting meaningful and measurable targets and holding governments accountable for real progress.

That's my dream. And I think it's one that I share with all of you in the Global Moms Relay. So, let Maha, Shifa and Fayzeh inspire us all to do better. Let's seek out the little girls with big dreams and help them to believe that they can be anything they want to be. It starts with a great role model. You.

You share, they give: each time you 'like' or share this post via the social media icons on this post or comment below, Johnson & Johnson will donate $1 (per action) to Girl Up -- a campaign that works to help girls, no matter where they live, have the opportunity to become educated, healthy, safe, counted and positioned to be the next generation of leaders. $1 provides one day of school for a girl in Guatemala. You can also Donate A Photo* and Johnson & Johnson will donate $1 when you upload a photo for Girl Up or Shot@Life -- you can help raise up to $250,000 in seconds with the click of your mouse or snap of your smart phone. Share this post with the hashtag #GlobalMoms, and visit GlobalMomsRelay.org to learn more.