A trio of Gisele Bundchen and Tom Brady's bodyguards will have their day in Costa Rica court after allegedly firing shots at paparazzi during the couple's wedding two years ago, InsideCostaRica.com and the Tico Times report.

The Organismo de Investigacion Judicial (OIJ) was called to investigate on April 4, 2009, following reports of shots being fired in the area of Santa Teresa de Cobano, where the Brady-Bündchen wedding ceremony was being held.

The OIJ report says that the photographers were on public property when private security guards forced them back onto private property, demanding they turn over their photographic equipment, when one of the bodyguards fired his weapon at the photographer's vehicle when they attempted to leave scene.


No one was injured, although the rear windshield of Cortez and Aviles' vehicle was blown out. The pair tried to sue Bundchen and Brady stateside in September 2009, but a New York State Supreme Court justice threw out the case, saying that neither the supermodel nor her footballer husband were living in the state at the time.

Lawyer John P. Gleason explained to the Boston Herald, "The photographers were just doing their job, and it's terrible what they did to them....They had permission to be on the neighbor's property. Which is a good 20 minutes away from the Bundchen property by car. They were using long lenses, but they weren't in anyone's face. They were separated by a valley. What happened to them was a slap in the face to journalists."

Brady previously told Sports Illustrated that the photographers' claims were "absolute total b.s. We found two guys on our property, and we told them to get out. Our security guys didn't even have guns. There were no shots fired."

An image of Cortez and Aviles' vehicle taken at the scene: 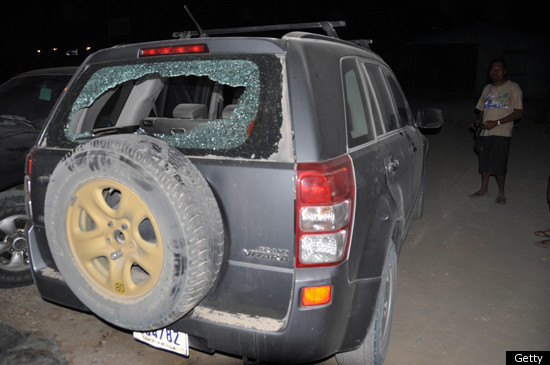